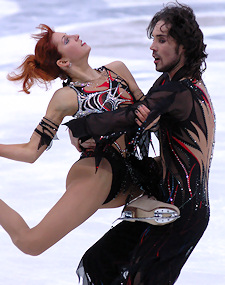 Jana Khokhlova and Sergei Novitski of Russia perform a dance lift during their Free Dance to A Night on Bald Mountain and In the Hall of the Mountain King.

Jana Khokhlova and Sergei Novitski and their spectacular Night on Bald Mountain free dance were the talk of the 2007-08 season. The Russian team drew a lot of attention with this exciting program where Khokhlova portrayed a witch, while partner Novitski took on the role of a demon.

Not only did the clever routine win over many new fans, it also took the bronze medal at both the 2008 European and World Figure Skating Championships. Khokhlova and Novitski made it to the podium for the first time in an ISU Championship in what was their third season of competing internationally as a team. Overall, they have been skating together for seven years now.

They decided to give it a try in October 2001, in the middle of the Olympic season. “My partner (Natalia Lepetiukha) at this time had retired from skating,” explained Novitski. “Jana traveled to one Cup of Russia (national) event with her previous partner (Andrei Maksimishin), but then to the next one with me.” Although they both were young enough to compete one more year in juniors, they decided to go senior right away. Three months later they finished a respectable 7th at the 2002 Russian Nationals. That was not a bad result for such a new team.

Right away, Khokhlova impressed not only with her flexibility but also with her expressiveness out on the ice. Until she was 13 years old, Khokhlova performed in the famous Muscovite children’s ice ballet “Aleko” that is well known for its colorful and creative shows. This experience is paying off. “Then I wanted to switch to pair skating because I was told that I would be suitable for pairs,” recalled the skater. “So I started to practice jumps, but actually I was already too old for learning the jumps. One coach spotted me and suggested that I should try ice dancing.” This coach was spot on!

Approximately two years earlier, Irina Zhuk and Alexander Svinin, two former competitive ice dancers who performed for many years in an ice show in England, decided to return home to Russia and to start coaching. They quickly built up a small group of ice dancers, and Khokhlova and Novitski joined them in 2003. Until then, the couple was coached by Larisa Filina, but they felt that they needed a new impact in order to progress. The ambitious husband-and-wife team with their extensive show experience was a good choice, albeit a bit risky as they just had started their coaching career. The practice and working conditions in the “Sokolniki” ice rink at that time were dismal. There was not enough ice time for the dancers, and the group had to move around from one rink to the next in order to find additional practice ice.

This situation has significantly improved since then. “We have two hours of ice in the morning and in the evening. We have a room for off-ice training and choreography and during our break, we can sleep on the benches in the dressing room,” a happy Khokhlova said. “They even promised us to put a sofa in the judges’ room and this would be real luxury,” Novitski added with a grin.

The dance team progressed fast under Svinin and Zhuk, but they had to wait their turn. The judges in Russia were backing Tatiana Tarasova’s students Svetlana Kulikova and Vitali Novikov, but in 2006 the road was free for Khokhlova and Novitski. They even qualified for the Olympic Games in Turin where they finished 12th.

“To be honest, even now I haven’t fully realized what happened at the Olympic Games and that they take place only once in four years,” said Khokhlova. “It’s a once in a lifetime chance for many athletes to compete there, let alone winning a medal. When we got there as the third [Russian] couple, we were just happy. Just now we realize how great it was for us that we had the chance to be there and that we made it.”

Khokhlova and Novitski’s rise continued steadily. In 2007 they earned their first medals on the Grand Prix series, qualified for the Grand Prix Final, finished fourth at Europeans, and placed eighth at Worlds. At the start of this season, the team caused quite a stir when they beat France’s Isabelle Delobel and Olivier Schoenfelder in the Free Dance at Trophée Eric Bompard. At the time, Delobel and Schoenfelder were the reigning European Champions.

“Our goal for the season was to change our style, to improve our technique and, as always, to think of something that sets us apart,” revealed 22-year-old Khokhlova. “The idea for this free dance came from our coaches and we loved it right away. The music (Night on Bald Mountain and In the Hall of the Mountain King) is rather well known, but we picked an unusual arrangement. I think it was the right choice.”

It definitely was. Everybody started to talk about this captivating, energetic program. Again, Khokhlova and Novitski also impressed with their trademark and seemingly acrobatic lifts that showed off her flexibility. “But we worked a lot on the steps, too,” Khokhlova pointed out.

While Khokhlova is a talkative and lively person, full of animation, her partner is contrastingly calmer. However, Novitski isn’t overshadowed by his partner and always has his own opinion. The Muscovites aren’t a couple off the ice. “We are friends and our relationships is very close,” Khokhlova explained. “We quarrel rarely and if so, only about professional aspects. In general we get along very well.”

The relationship to the audience is very important for the two skaters. The Russians never forget to thank the crowd and their fans for their support at each press conference and interview. And they mean it. Thanks not only to their performances on the ice, but their friendly and open characters as well, Khokhlova and Novitski have found many fans all over the world. “We have a lot of fans and a grateful audience in all countries,” said Khokhlova. “I was impressed with how many fans there were last year in Poland (in Warsaw at Europeans 2007). Many people came to us and encouraged us.”

“In Japan, we have many fans as we skated several times at the NHK Trophy,” added 26-year-old Novitski. “We receive a lot of presents, post cards and letters there.” The most unusual present he got so far were colorful socks. “I’m wearing them!” he assured. Khokhlova, on the other hand, was impressed by a cake that a faithful Japanese fan made for them. The two are just regretting that they hardly have time to answer all the fan mail.

It was no surprise when Khokhlova and Novitski claimed the bronze medal at Europeans in Zagreb, but the crowd cheered for them as if they were the champions. In fact, they earned more applause for their free dance than the gold and silver medallists. The situation for them changed dramatically at Worlds when the leading Russian dance team, European and Grand Prix Champions Oksana Domnina and Maxim Shabalin, withdrew from the event a few days before it started due to Shabalin’s ongoing knee problems.

Khokhlova and Novitski then found themselves in a position to medal and were regarded as the only Russian team with a realistic chance to do so. With a bit of luck, they pulled it off. Their compulsory and original dances were excellent, and the Muscovites stood in second place heading into the free dance. The pressure, however, caught up to them. The team didn’t skate their free dance with as much energy as in their previous competitions of the season, and Novitski even slipped briefly during the circular footwork. Khokhlova and Novitski were only ranked fifth in the free dance, but managed a third place finish overall to win the bronze. Tanith Belbin and Benjamin Agosto beat them in the free dance, but the Americans were already behind due to an uncharacteristic fall in the compulsory dance.

As the Russians had skated first in the final flight for the free dance, they needed to wait until everyone else had performed before they knew the result. After talking to Russian TV and the Russian press in the mixed zone, Khokhlova and Novitski went to the dressing room area to await the results. Tears of happiness flowed when Khokhlova found out that they had medalled. They had hoped to for a medal but it was still a dream. When it became realistic, it pushed the team even harder.

Khokhlova recalled that while it wasn’t difficult to skate the free dance, the situation was different in that they were medal contenders for the first time at worlds. “We were very happy with our scores and placement. It was definitely a big step forward for us,” Novitski explained. “There was a lot of tension, especially in the last warm up group. When we got out on ice we were trying not to think about a medal. We just want to focus on skating as well as we can.”

Khokhlova and Novitski have great respect for their competitors, but they also realize that they are now part of an elite group of ice dancers. They regard the North American couples as strong rivals. “They got the highest levels for their footwork already last year,” noted Khokhlova, “and they execute them really well. But we are putting a lot of emphasis on technique as well. If we skate clean, we can compete with them on the same level with our spins and lifts.”

Though Khokhlova and Novitski earned high levels for their elements as well, they were sometimes held back in the component score area by the judges. The Russian team continues to work hard on their presentation with the aid of two additional choreographers (Tatiana Stepanova and Viatcheslav Kritchmarov) which came aboard early in 2008. “Tatiana challenges us,” Khokhlova revealed. “We might say, ‘No, we can’t do this,’ and she’ll respond with, ‘Yes, you can do that. Get out on the ice and do it.’ She is very strict but that’s for the better. Sometimes we need this.”

After Worlds the couple got one week off but then resumed training. “The new free dance is almost finished except for the last 20 seconds,” coach Alexander Svinin said at an exhibition gala in Moscow on May 14. But he wouldn’t reveal the music yet. Khokhlova and Novitski presented a new fun exhibition program to the Russian song Not a Pair with Khokhlova dressed up and Novitski wearing an old sweater and baggy jeans.

Khokhlova has been busy since Worlds, and not just with skating. “I wrote my thesis for my coaching diploma,” said the athlete. She wrote about “relationships in dance teams” and used herself and partner, as well as fellow skaters Ekaterina Rubleva and Ivan Shefer, as examples. The final exams will take place in June.

Thus far, Khokhlova and Novitski are the number two ice dancing team in Russia. It will be interesting to see what happens next season when Maxim Shabalin comes back to competition. One thing is for sure – with all of the top dance teams being so close, each of them will need excellent programs to challenge.