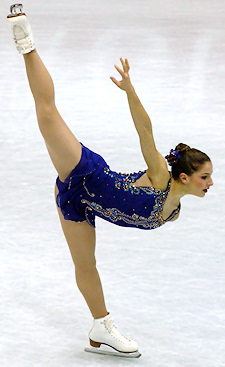 “I want to continue to improve and progress,” Hacker said of her future goals. “This past season I have made a big effort to take skating one day and one competition at a time and not get ahead of myself. My goal at the beginning of the season was to improve my technique and mental strength.”

Hacker’s only previous international experience was a sixth place finish at the ISU Junior Grand Prix in Miercurea Ciuc, Romania in 2006 and wins in junior ladies at the Triglav Trophy and in novice ladies at the North American Challenge Skate in San Jose, California in 2005.

The 18-year-old started skating once a week when she was five years old. “I did not begin lessons until I was seven or eight,” Hacker recalled. “I first started skating because my older brother, Matthew, was taking hockey lessons and I had to tag along. At first I really hated to skate but I gradually began to love it.”

As for other sports, Hacker said, “I took gymnastics class when I was five or so, but nothing serious. I did horseback riding when I was in elementary school and did local shows and won ribbons. But I chose to focus on skating when I no longer had time to do everything. I still ride occasionally in the summers on Martha’s Vineyard with my cousin, who is 14 and is a competitive rider.”

“I love so many different things about skating,” she continued. “First, I like that it is a combination of art and sport. I like setting goals and working hard to achieve them. I think that it feels wonderful to have a good competition after training so much. I also just love to jump.”

Not that the jumps came that easily for her. “I got my double Axel when I was 13, after three years of struggling,” Hacker recalled. “Then I landed my first triple Salchow and toe loop about a month later.” Now she has all the triples. “I like all of them! Sometimes I prefer one over the others, but in general I like them all.”

“In practice, I’ve been working on and landing triple flips and triple-triples (triple toe-triple toe and triple Salchow-triple loop) and I plan to include them in my programs next season,” Hacker noted. “I love to work on new elements.”

In the United States, Hacker has been a force at the North Atlantic Regionals, winning her division every year since 2002, except in 2003. But she had not done as well at Nationals. Her only medal was a bronze in novice ladies in 2005. She had finished seventh in junior ladies in 2006, but failed to qualify for Nationals in 2007.

Hacker, who was born in New York, trains at the Skating Club of Boston in Boston, Massachusetts with Peter Johansson and Mark Mitchell. “I had been with the same coach, Tracy Doyle-Lunde since I started skating,” Hacker explained. “Tracy did a great job, but last year, when I did not qualify for Nationals, I decided that I needed to make a coaching change to get to the next level. I started skating with Peter and Mark in December 2006.”

“For the first six months I only skated in Boston two days a week because I needed to be in school in New York the other days,” she continued. “It was pretty exhausting. My Mom and I would drive up to Boston on Sunday evening, skate Monday and Tuesday and drive back to New York on Tuesday evening. Then I would go to all my classes on Wednesday through Friday and skate after school with my old coach.”

“I immediately loved Mark and Peter’s coaching style and the training environment they have created at the Skating Club of Boston,” Hacker enthused. “All the skaters work so hard and push and support each other! The minute school was out in June, I moved up to Boston for the summer.”

At the end of the summer, Hacker decided she wanted to stay in Boston full time.”Since it was my senior year, we arranged for me to be able to follow all my school classes at Professional Children’s School, from Boston,” she explained. “My school is set up to deal with kids with passions outside of school. There are dancers, musicians, actors and horseback riders. So they were supportive when I asked if I could stay in Boston.”

Hacker likes to skate three sessions per day, five days a week, plus an hour on the weekend. “But some days I have had to limit myself to two sessions because I had a hip injury,” she noted. “I am pretty efficient and do everything I need to during that time.”

“We have a wonderful trainer, Mike Cook, at the Skating Club of Boston, and we work out as a group, which is really nice,” Hacker said. “We do a combination of exercises including strength, aerobic, and anaerobic training. My physical therapist, Peter Breen, who competed in the 1992 Olympics in ice dancing, helps take care of my injuries.” She has also added swimming to her cross training schedule.

“It has been hard, but definitely worth it,” Hacker stated. “I cannot explain the difference training in Boston has made to my skating! I feel like I have improved so much in just a year.”

Mitchell choreographed Hacker’s 2007-08 programs. For the short program, he re-choreographed her 2006-07 short, which used music from the Love Story soundtrack by Francis Lai. Her new long program was Concierto de Aranjuez by Joaquin Rodrigo.

Hacker likes to skate to music that allows her to emote and that complements her skating style. “I like classical music in general,” she said. “My short and my long were very different this season. The short was very pretty while my long was dramatic and passionate. Mark liked my Love Story short program so we decided to keep that. He wanted to challenge me with music that was different than what I was used to, and so he chose Concierto de Aranjuez. My exhibition music is One Night Only from the movie Dreamgirls.”

For the 2008-09 season, Hacker plans to use On Golden Pond for the short, but she has not yet chosen music for the long. She has been assigned two Grand Prix events this fall – Cup of China and NHK Trophy.

Hacker decided to defer her acceptance to Princeton University for one year to devote herself full time to skating. “I’ve carried a heavy academic load all through high school,” explained Hacker. “I was accepted at a lot of great schools, but I really love Princeton and I think it will be a great fit for me. The people and the classes were great. I’m sure I will participate in the skating team at Princeton, perhaps helping to coach and choreograph.”

Hacker has done well in her studies, making the 2008 U.S. Figure Skating Scholastic Honors Team and qualifying to be a National Merit Scholar. Eventually, she hopes to go to medical school and become a doctor. She has also shown her commitment to education by raising funds for others.

“In April 2007, my friend, Jenny Bloom, whom I met skating when I was seven, and I produced a skating show called “Edges for Education,,” which benefited the Literacy Center at Boys and Girls Harbor in Harlem,” Hacker explained. “Both of us value education and see reading as a key to success in life. We thought it would be wonderful to use skating as a way to help others. We raised over $32,000!”

Off ice, Hacker likes ballet, swimming, biking, reading and spending time with her family. “I love to read,” she said. “I like classics, histories and fiction. At the moment my favorite book is The Mill on the Floss by George Eliot. I really like to travel. I’ve been to Europe several times with my family. I hope that I will be able to see some new countries this year. My favorite skating trip was to Triglav Trophy in Slovenia in 2005. The competition was great, the country was breathtaking and everyone was incredibly nice.”