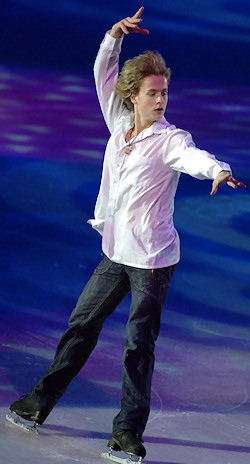 Russia's Artem Borodulin, 19, skates to Here I Am by Bryan Adams at the 2008 World Junior Figure Skating Championships Gala.

In November 2007, Russia’s Artem Borodulin limped on crutches into the ice rink at the Cup of Russia as a spectator. He had broken his right ankle less than a month before while practicing a jump. Two months later, he took his first steps onto the ice during Russian Nationals when the official practice of the competitors had finished. In March, he won the silver medal at the World Junior Championships, five places up from his previous showing the year before. This strong comeback says a lot about the now 19-year-old’s determination.

“When I got injured, basically everybody told me that it wasn’t realistic to recover (in time for Junior Worlds),” recalled Borodulin. He was not about to give away that opportunity, however. “It was my last one because of my age. Even if the chances for recovery were slim, I still tried to do it. Others might not like that I’m a stubborn, very difficult person, but I will go to the very end. I don’t let go. I won’t give up my spot just like that. I’m very jealous. I want attention,” the skater summarized honestly.

The devastating injury that Borodulin suffered on October 28 probably would have been the end of the season for many other skaters, but he was determined to come back. “It was so upsetting,” the student from Moscow recollected, “especially when I realized that it (the ankle) was broken and that I won’t go to the (Junior) Final. It was upsetting – the others can go and I can’t. It was even worse, because I knew I had good chances to fight for the victory. I knew that I was in good shape and that I was ready. It was very difficult mentally.”

“My coaches supported me a lot,” Borodulin continued. “Elena Germanovna (Buianova, neé Vodorezova) and Tatiana Anatolievna (Tarasova). There was also Alexei Alexandrovitch Tchetverukhin, who is doing the off ice training with us. They all supported me, as well as other skaters from CSKA (Centralnyj Sportivnyj Klub Armii). Andrei Griazev often came to visit me. Time flew by quickly, and I counted the days when the cast would be removed. I even crossed out the days on the calendar at home.”

The cast finally came off just before the New Year, and Borodulin was told by doctors that he couldn’t walk and would need a cane. “I didn’t take the cane,” said Borodulin. “I walked by myself. I walked slowly. It was hard, but I walked, and I saw that I was doing well already. Then I went prematurely out on the ice. I started to skate step by step. Nobody really expected anything from me.”

Borodulin took a dicey risk, but he didn’t care. “It was dangerous,” he admitted. “They warned me. If the bone hasn’t healed and breaks again, it will be serious. It also hurt – mostly the ligaments because they were ruptured. I underwent special treatment, therapy. I only had one goal. I wanted to go to Junior Worlds and to win.” He didn’t win, but the silver was as good as gold for him, and the decision between him and Adam Rippon was close.

Borodulin’s parents put their son at age five into the sport, because they liked figure skating. “There were tests in Perm in the club,” explained Borodulin. “They (the coaches) said I was suitable for them and we had one practice a day. So in the beginning I was skating just for myself, to be healthy. I didn’t even really have the desire to skate. My mother forced me. There were even a lot of tears. But later, when I was like 12, 13, and 14-years-old, I wanted it myself. I knew then that I want to achieve something.”

Initially Borodulin’s father suggested swimming, but his mother wanted him to skate. “My mother really likes figure skating and she admires legends,” Borodulin said, “especially Tatiana Anatolievna (Tarasova), Elena Germanovna Buianova, Alexei Nikolaevitch Mishin. It was my goal to be coached by these stars. I strived for that and now I am there, trained by Tatiana Anatolievna Tarasova and Elena Germanovna Buianova,” he continued, not without pride. “My mother always wanted me to win. I hated to lose myself when I was small. I would even cry in competitions when I lost. My coach said, “Don’t be ashamed. That’s alright, you have to get out your rage and not keep it inside you.” I hated to loose and I still don’t like to loose. I’m only looking at the victory.”

Although Borodulin’s mother is involved in his career a lot, she does not watch him compete. “I don’t like it. When she watches, I have a bad skate,” he explained. “When we have a test skate, she leaves the ice rink and goes to the dressing room area. She calmly watches the practices, and I’m fine with that, but not at competitions. She didn’t even watch the live broadcast of Junior Worlds. My dad was watching, but my mother didn’t. She then watched the recording.”

Like Andrei Griazev and pair skaters Tatiana Totmianina and Maxim Trankov, Borodulin comes from Perm in the Ural mountains, and like them, he decided to move to find better conditions for a career. He moved to Moscow in 2006 with his younger brother, Sergei, who is a figure skater as well. “I had a goal to train hard in order to win,” said Borodulin. “The move was positive for me. For my little brother, though, it was very difficult, emotionally. Our dad stayed behind in Perm, and we moved only with our mom. She is making sure we are following our schedules, cooking for us, and always helping us. She always comes to our practice to watch.”

The move, again, was a decision the teenager made himself. “I finished the 11th class (in school) and I realized that it would be already difficult to skate in Perm. There are only a few athletes, and almost no single skaters. It was basically just me. There was no competition and I started to feel that I was lagging behind, especially in the overall skating. Technically I progressed, but in order to skate more emotionally I went to Moscow to Tatiana Anatolievna and Elena Germanovna. I liked it a lot and my mother said that my skating had changed a lot just after two weeks. It became better and better. When I moved, Tatiana Anatolievna put a lot of emphasis on the footwork and forced me to do them. Elena Germanovna forced me to do the spins. We didn’t work on the jumps, because I had them, but I had to work on the style, on the skating, because without style you don’t get anywhere in international competition.”

Borodulin’s idol in skating is 2002 Olympic Champion Alexei Yagudin. “I like the way he skates. This is masculine skating – the power, the footwork, the jumps, and the emotions. This is figure skating. I don’t really like how the North Americans skate now. I prefer the style of Yagudin and Joubert. Depending on the music, skating should also be soft. Yagudin also had classical programs, but there was this masculine energy coming from his skating. There is a man out on the ice,” he pointed out.

Borodulin is now part of a strong group in the CSKA club. 2007 Russian Champion Andrei Griazev and junior skater Nikita Mikhailov are training with him under the guidance of Elena Buianova. “I’m on very good terms with Andrei Griazev,” Borodulin revealed. “We go out together. We socialize. As for Nikita Mikhailov, we say ‘hello’ and talk, but not often. I don’t have the same close relationship with him as I have with Andrei. With Andrei I get along very well.” At the same time, however, Borodulin doesn’t feel that real friendship in the sport is possible.

“I don’t have real friends in the sport,” admitted Borodulin. “Andrei, yes, but now I’m moving up to seniors and the competition will start sooner or later anyway. You always have to keep your distance. I have a lot of friends in Perm. I’m basically good friends with the pair skaters. They aren’t like the single skaters. There is not such envy, although there are people working against each other as well.”

A typical day for Borodulin starts at 8.30 am. “My mom prepares breakfast, and after I eat, I go to the rink to the warm up room. I warm up for half an hour, then I get on to the ice. The practice on ice depends on whether I’m preparing for a competition or not. Usually I train for about one and a half hours.” After the practice on ice, he stretches and then goes home where lunch awaits him. “I have lunch and I then I go to sleep.”

After an hour or two of napping, Borodulin then goes to a second practice. “After that I have a few hours to get on the computer or watching TV. I go to bed around 11:30 pm. It’s always the same. Wednesday we have half the day off. We go to the sauna after practice to rest, and then we go to the cinema. On the weekend, we’re also going out.”

Off the ice, Borodulin likes listening to Rap and R&B. He is interested in soccer and streetball, likes watching Italian soccer, and enjoys playing billiards. He just started his third year of studies at the Russian State University of Physical Culture and Sports.

For this season, Borodulin has set himself some clear and ambitious goals. “I want to learn a quad now. Of course I’ll have to work on the new free program. I have to add more steps and improve my footwork in general.” It took him a while to master the triple Axel, but since last year Borodulin can do the jump textbook-perfect. “Artem is very hard-working,” said coach Elena Buianova.

The skater is keeping last year’s short program to Yablochko, also known as “The Russian Sailors Dance” by Reinhold Gliere, and is skating to a Tango medley that includes Assassin’s Tango and Tango de Roxanne for his free. According to his coach, Borodulin is healthy now and not bothered by injuries anymore. He is currently slated to compete at the Cup of China and the Cup of Russia in November.