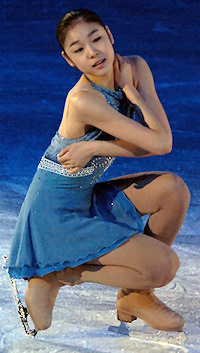 South Korea’s Yu-Na Kim continues to make history every time she steps on the ice. When she won the Triglav Trophy in Slovenia in 2002 in novice, it was the first victory for a Korean lady at an international event. When she won the ISU Junior Grand Prix (JGP) in Budapest, Hungary in 2004, it the first time a Korean skater had won a JGP event. She followed up with a silver at the 2005 JGP Final, making it the first time a Korean had reached the podium there. She topped that at the following JGP Final in 2006, winning gold – another first.

It didn’t stop there. Kim was the first Korean to stand on the Worlds podium when she took the bronze at the 2007 World Figure Skating Championships. When she won bronze again the following year, she became the first “repeat” medalist from Korea to stand on a World Championship podium.

Kim, who will turn 18 on September 5, was born in Gyeonggi-do, South Korea. She began skating when she was six. “There was a new ice rink near my house so I went with my family,” she recalled. “I tried it and I liked it. I did my first triple toe loop when I was ten and within two years, I had all the rest of my triples. I’ve tried the triple Axel, but I haven’t landed any clean ones. It’s better to have clean jumps.”

Kim began training with two-time Olympic silver medalist Brian Orser in the summer of 2006. In May 2007, she moved to Toronto, Ontario, Canada to train with him year-round. “The environment is very good for training there,” Kim said of the Toronto Cricket, Skating and Curling Club. “I first went there to work with David Wilson and found that Brian and I had a lot in common, so we made a team. I like the way he coaches and how he explains to me the jumps and elements.”

Kim works for two and a half hours a day, six days a week, on ice. She does another three hours daily off ice. “We do a lot of cardio and strength training and an intense warm-up before each session,” Orser explained. “We do a lot of core strength work, but not Pilates. Last October, we started her doing a little bit of ballet with Evelyn Hart, who was a prima ballerina with the Royal Winnipeg Ballet. I’d like her to get into yoga. I do it myself.”

David Wilson has choreographed Kim’s programs for the last two years with the exception of the short program the first year. “We change both programs every year because they’re out there so much,” noted Orser. “It’s refreshing to see new programs. Yu-Na is very versatile with her styles and can adapt to anything. She moves well beyond her years.”

For the 2008-09 season, Wilson and Shae-Lynn Bourne proposed several pieces to Kim for the short program, and she chose Danse Macabre by Camille Saint-Saëns. For the long, she will be using Scheherazade by Nikolai Rimsky-Korsakov for the long. “I was very attracted to Scheherazade four years ago after another skater used it,” said Kim, “so I have decided to use it this season.”

“Since Worlds, Yu-Na has really come into her own in terms of maturity and development,” said Orser. “We felt that it’s time she should have more input in regards to her music. It’s a process trying to get her to choose the music. Once we find the right kind of music, we get her to choose the final piece. We have a great rapport, as well as good communication, and that really helps.”

“I’ve tried several kinds of music and classical kind of fits me,” said Kim. “I feel comfortable when the music is classical and I like to skate to it. I played a bit of piano when I was young, but no more. Now I listen mostly to Korean pop music. I can find it online.”

“Historically, we’ve focused on training the jumps she can now do,” said Orser. “Now we’re not training any new jumps. We have been working on her triple loop, which is her nemesis jump. It’s not as good as it was before she was injured before worlds, but we feel it has improved up to this point. We’re also doing a lot of skating skills development.”

“Yu-Na has inflammation in the S1 joint and a tear in the tendon attached to her hip bone that flares up now and then,” Orser continued. “It’s probably a little bit of an overuse injury, but the previous year it was worse. Then it was more her coccyx. Last season it was more her hip. They’ve been trying acupuncture and some alternative medicine treatments to avoid any surgery. My mission is to get it fixed because we can’t go through this every year.”

Nobody has really seen her at her best due to the various injuries she’s had over the past few seasons,” added Oser. This summer, however, we’ve had nine weeks of really great training, and we are looking forward to this season.”

She also had a problem with her boots breaking down after a short period of use. “She was going through six pairs a year,” Orser said. “But she found some good boots in Tokyo last year and now it’s back to two or three pairs a year. It probably did contribute some to her hip injury when she was younger, but that’s not an issue now.”

Kim will be applying to Korea University (KU). She has an interview in October and her admission will be determined in December (during the Grand Prix Final). “I’d like to go to the university to study sports,” she said. “I have to because I want to be a professional figure skater and then a coach. I feel that KU has shown the greatest understanding of my position as a professional skater.” Kim was attracted to the university because of the sports facility which includes an ice rink.

“I’ll be away for a year in order to attend the 2010 Vancouver Winter Olympics and I was looking for a university that would understand such circumstances,” added Kim.

Off ice, Kim likes to surf the web and read Korean novels, especially books that fans send to her. She also buys souvenirs related to figure skating. “I try to take all the toys that people bring to me home with me if I can,” she said. “I always keep the special ones.”

“The fans are a big support for me even when I’m not at my best,” she continued. “They give me a lot of strength. Sometimes when I’m training, it’s really hard for me, but when I go around the world and get good results and meet new people, it’s really nice. I like shows more than the competitions because there’s less pressure.”

Now Kim is hoping to be the first Korean to reach the podium at the Olympics. “Going to the Olympics in 2010 is my first goal,” she said. “I’d like to have a good performance there and then good results will follow. Usually my goal is to improve my skating the most that I can. I always want to get closer to perfection.”