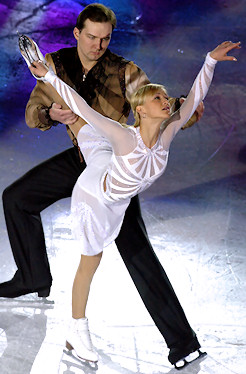 Ukraine's Tatiana Volosozhar and Stanislav Morozov perform to Total Eclipse of the Heart at the 2008 World Figure Skating Championships Gala.

Following the 2008 World Figure Skating Championships, Ukraine’s Tatiana Volosozhar and Stanislav Morozov made a major change in their career. They left their home town of Kiev and moved to Chemnitz, Germany, to train under Ingo Steuer alongside reigning World Champions Aljona Savchenko and Robin Szolkowy.

“We didn’t have a real pair skating coach in Kiev,” Morozov explained. “Mostly I was training her (Volosozhar), and this didn’t work out too well. It was somehow logical that we switch to a very experienced coach. Ingo not only skated well himself, but he is also a very experienced coach and there is no other alternative for us in the Ukraine and even in the world.”

Earlier this last season, the Ukrainians narrowly missed the podium at the European Championships, finishing fourth. Then they struggled during the free skate at Worlds to come in ninth overall.

While still in Göteborg, Volosozhar and Morozov met with Steuer and Savchenko to discuss a coaching change. They arrived in Germany in June and currently rent an apartment next to the ice rink. The team is also receiving financial support from the Ukrainian government as well as from the Ukrainian Figure Skating Federation who pays their expenses. The couple adapted quickly to the new environment.

“We always had, and still have, a very good relationship to Aljona and Robin,” Morozov said. “Aljona is helping us a lot. We are neighbors and we are friends.” The Ukrainian-born Savchenko, who moved to Germany in 2003, often helps out as an interpreter. “Stas (Stanislav) is more or less coping with German, because he studied it as a child, but I don’t understand it so far,” admitted Volosozhar.

According to Steuer, the first days of training were very difficult. “I had to convince Stanislav that it was necessary to change something in the elements and in their skating itself. Obviously everything is coming easier to Tania, but I’ve learned in the past five years to deal with Ukrainian mentality,” the coach joked.

They immediately began working on their new programs for the 2008-09 season. Steuer changed both programs, and the Ukrainians will skate to music from the Mr. Holland’s Opus soundtrack in the short. “We didn’t really have to choose music ourselves as Ingo suggested us some pieces and then we for some reasons picked this for the short program,” explained Volosozhar. “In the beginning, we didn’t even like it so much, but once the program was ready, we grew used to it.”

For the long program, the team will skate to music from the Pearl Harbor soundtrack. As with Savchenko and Szolkowy, Steuer did the choreography himself. “The free program is completely different and we are trusting fully in Ingo’s choice,” said Volosozhar.

When the Germans went to Toronto to train at the end of July two and a half weeks, the Ukrainians returned to Kiev and trained there for one month until August 11. While in there, Volosozhar and Morozov followed a training schedule that Steuer made for them. The ice rink in Chemnitz opened again on August 9 after the summer break.

Volosozhar and Morozov are very happy with their move. “The practice conditions are at the highest level. They are perfect,” praised 22-year-old Volosozhar. “We have three to four hours ice time a day. We have sometimes two practices a day, but they are very productive and the time is just flying by. You can’t compare the conditions in Germany with the conditions in the Ukraine. Here (in Germany) everything is focused on the work, nothing is distracting us. At first it was difficult for us to adapt, because we weren’t used to work at this speed!”

The Ukrainians don’t practice in the same group as Savchenko and Szolkowy as they have their separate practice ice. Steuer also trains Canadians Rachel Kirkland and Eric Radford, who are based in Toronto, but come to Germany to train as well. Recently, the Swiss junior pair Anaïs Morand and Antoine Dorsaz joined the new pair skating hub in Chemnitz.

“Tania’s and Stanislav’s strength are obviously the throw jumps, although I also see a good potential in their spiral sequences,” Steuer explained. “I won’t talk about their weakness, instead, we will work on them!” The couple themselves would like to include a quad throw in their repertoire for the future.

“We will try the quad throw Salchow, hopefully for the Olympic Games,” Morozov said. “There is not much sense in doing a quad twist.” “We tried the quad twist on the floor, but to do it ideally on the ice (is hard),” his partner added. “With the new judging system we’d get a negative grade of execution anyway,” Morozov continued. “To catch the partner on the hips in a quad twist is very difficult. So we’d probably try the throw jump.”

Volosozhar began skating at four. Her mother liked the sport, and as a girl dreamed of being a figure skater, but didn’t have the opportunity to skate. “So she just took me and my elder sister to public skating sessions,” recalled Volosozhar. “Then she wanted me to put in a skating class, but they wouldn’t accept me first. They said I that I was too fat and that nothing would come out of it. They led me into a room for testing, and I didn’t leave a strong impression there either. They said, ‘we’ll take the girl for three months and we’ll see how she develops’. But it worked out step by step and they kept me.”

Morozov actually had no choice – his father is a pair skating coach. “They put me on skates and then they put me into pairs, although my father said, ‘nothing is going to come out of this little fatty,'” said Morozov. “I was really fat when I was a young boy.”

Morozov switched to pairs at 11 years of age and first skated with Elena Belusovskaya. He later paired up with Savchenko, but they split up in 2002 and Morozov retired from competitive skating. “I was battling injuries,” explained Morozov. “I had two, three surgeries, but then I thought about it and I felt that I wanted to continue skating.” He had turned to coaching and was working with Volosozhar and Kharchenko, but then suggested her to skate with him and she readily agreed. Meanwhile, they are also a couple off the ice.

“Sometimes this is difficult and I think, where can I go out with my friends to get away a little,” Volosozhar admitted, laughing. “Sometimes when we have trouble in practice or he is in a bad mood, it’s difficult, because we’re always together.” However, they point out that they usually quarrel only about skating-related issuesf. “We let off steam and calm down,” she added.

Volosozhar was 14 when she began skating pairs, and competed for four years with Petr Kharchenko before teaming up with Morozov.

The skaters are looking forward to the 2010 Olympic Games in Vancouver, but they are also thinking beyond that. “My father said as long as you have the desire to skate and if you’re healthy, why not?” pointed out 29-year-old Morozov. “I’d continue until Sochi (2014 Olympic Winter Games). Alexei Tikhonov competed until 35.” And Volosozhar is ready to stay in with him. He anticipates a coaching career after skating. “I don’t know how to do anything else,” the athlete said, grinning.

The past season didn’t go as well as the Ukrainians had hoped. “When we started to work with Nikolai Morozov, we improved our skating skills,” Volosozhar said, “but our pair skating elements suffered. Probably there just wasn’t enough time to improve both. I think that’s why we sometimes missed elements.”

However, Steuer has clearly announced the goals for the new season. “Our goal is a medal at the Europeans, and we’ll take it from there,” he said. He plans to send all three of his senior couples (Savchenko/Szolkowy, Volosozhar/Morozov and Kirkland/Radford) to the Nebelhorn Trophy at the end of September in Oberstdorf as their first competition.

Later in the season, Volosozhar and Morozov are scheduled to compete at Cup of China and Cup of Russia. Steuer won’t travel with them to all events, but Nikolai Morozov and/or Steuer’s new assistant coach, Thassilo Thierbach, will help out.

Thanks to their talent and their new coaching environment that provides the best conditions they ever had, the Ukrainians seem ready to shine in the coming season.