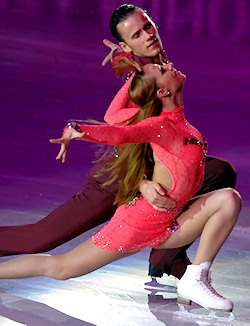 Russia's Kristina Gorshkova, 19, and Vitali Butikov, 21, perform to When You Told Me You Loved Me by Jessica Simpson at the 2008 Junior World Figure Skating Championships Gala.

The reigning World Junior bronze medalists, Kristina Gorshkova and Vitali Butikov, are part of a group of young and promising Russian ice dancing teams and will make their senior debut this season. Although the Russians originally had hoped for more than the bronze at Junior Worlds this past March, it was in fact an accomplishment after all they went through last year.

Around the end of June 2007, Butikov broke his left ankle while playing soccer during an off-ice training camp in Sochi in the south of Russia. On July 3, their coach Tatiana Kuzmina was killed in a tragic car accident in Moscow along with her 13-year-old daughter, Alexandra.

“It was a shock. It was so unexpected,” Gorshkova said of the loss of their coach. “Elena Anatolievna (Tchaikovskaia) pulled us out of this. She found a new coach for us, Ksenia Gennadievna Rumiantseva and Petr Viatcheslavovitch (Durnev). After Vitalik broke his foot and went back on the ice for the first time, I thought, ‘we won’t be able to go to any competitions, not to the (Junior) Grand Prix, nothing’. We had very little time, and we didn’t have (new) programs or any practices of compulsory dances.”

“We went to the (Junior) Grand Prixs with what we had,” Gorshkova continued. “We were not in the best shape, but then we somehow recovered and felt good towards the end of the season.” Though disappointed, Butikov wasn’t too upset about his injury. “The first day, yes, I was upset,” he said. “I thought we might miss the season, but then I pulled myself together and it was ok. We came out of it and I was ready in time for the (Junior) Grand Prix.” Butikov went back to the ice the first week of September 2007.

The team quickly adjusted to their new coaching situation. “I didn’t even expect that we would find a common language so fast,” Gorshkova commented. “They are hard-working and they helped us a lot to come back from the injury. They prepared us well.” “They skated with us before,” Butikov added. “They were at the same training camps, so we knew each other and it was ok.” Rumiantseva became Elena Tchaikovskaia’s new assistant following the untimely death of Kuzmina.

Tchaikovskaia’s school currently has a group of ten young ice dancing teams. It consists of mostly of junior teams, including Finnish ice dancers Oksana Klimova and Sasha Palomäki. “Kristina and Vitalik have very good skating skills and strong compulsories,” noted Tchaikovskaia. “They have so much speed that I have to slow them down sometimes. They are a modern couple with a lot of abilities and we have a lot of confidence for the season. They are ready to move up to the senior level.” The experienced coach has prepared a Blues and Charleston original dance and a free dance to music from The Godfather soundtrack with them for this season.

Gorshkova and Butikov switched to ice dancing at ages ten and eleven, respectively. “I was skating singles since I was four,” said Gorshkova. “It went well, but then I switched to dance because I didn’t like the jumps, although they worked for me. But I preferred ice dancing. Just in this time (ice dancing coach Alla) Beliaeva moved with her group to our ice rink and I went to her into dance.” Butikov had another reason for changing disciplines. “I quarreled with my single skating coach,” he revealed, laughing. “It was stupid, but we quarreled. I left for ballroom dancing and focused on it for like one week.” Butikov still wanted to skate, so he decided to go into ice dancing. “I actually did ballroom dancing while I was doing single skating. I did both before I moved to Moscow,” he explained.

Gorshkova’s mother was a skater as well, but retired at age 16 from competitive skating. Later she put both daughters into skating. Kristina’s younger sister is a show skater now and performs in Igor Bobrin’s Ice Theatre. Butikov started skating ‘just because there was an ice rink near our house’. “First my parents wanted to put me into swimming because the swimming pool was even closer to our house, but then I started skating,” he grinned. The athlete originally comes from Perm and moved to Moscow when he was 11 after coach Alla Beliaeva invited him to start ice dancing with one of her students – but not with Gorshkova. However, Gorshkova and Butikov were in the same group and the coach quickly changed her mind and teamed them up. They were a good match from the beginning.

Still, Gorshkova decided to go back to single skating for half a year before coming back and staying with ice dance for good. “I did both singles and dance the first time after I switched,” she said. “Then they told me that I had to choose – what do you want more, singles or dance? I said that I didn’t really know and I decided to focus on singles after all. I skated singles for half a year, but that was it and I decided that I really wanted to do dance. So I went back to skate with Vitalik, and since then we have been skating together.” They have never seriously thought of changing partners and feel that they are friends.

Gorshkova names Anjelika Krylova and Oleg Ovsiannikov and Marina Anissina and Gwendal Peizerat as her all time favorite couples. “I liked Krylova and Ovsiannikov because they had interesting programs and they skated beautifully. I really liked Anissina and Peizerat. I can’t even say exactly why, but I liked everything about them,” she said. “I admired the Canadian Victor Kraatz,” Butikov added. “He was my idol when I went into ice dancing. He had such a soft skating style.” Their current favorite dance programs are “Requiem” by Albena Denkova and Maxim Staviski (2007) and “Polovetsian Dances” by Oksana Domnina and Maxim Shabalin (2007). Butikov also really liked “The Umbrellas of Cherbourg” by Tessa Virtue and Scott Moir (2008).

Butikov feels a bit sad about leaving the junior ranks behind, while Gorshkova is keen on the new challenge. “I’m not regretting to leave the juniors,” pointed out Gorshkova. “I’m interested in going to the senior competitions to see what happens there and to feel what it is like. I never skated in senior events before with these kind of (top) teams. We are now moving up to the senior level, and of course we have to work much harder. We will learn from our mistakes that we made in the past season and from things that didn’t work.” Her partner is hoping to improve their lifts most of all. “It’s just difficult now to think of something new, but you have set yourself apart somehow,” he observed. “You have to think of new lifts.” Interestingly enough, both skaters are enjoying the compulsory dances.

The team loves ice dancing, but they feel a little bit bothered by the rules of the ISU judging system – the Code of Points. “In general it’s a good system,” noted Gorshkova, “but these criteria for the levels lead to everybody doing the same lifts. You can add some arm or leg movement to the pose, but basically it’s all the same.” “They start to be obsessed with these difficult elements and the dance itself is lost,” Butikov added. “Yes, the dance gets lost because of this chase after elements and levels and high marks for the technique,” agreed Gorshkova. “It’s difficult to do a real dance with all these elements that are needed.”

If they could make the rules themselves, however, they wouldn’t change them too much. “I would soften the requirements to be able to include something from ourselves,” Butikov said. Gorshkova feels that most of the elements do belong into the program. “All this is ok,” she said, “but just the criteria shouldn’t be there. Like in an exhibition program where you can do whatever you want. You can create lifts or interesting elements, spins or little steps. But in general the rules are ok.”

Both skaters are studying at the Sports Institute and like watching movies and meeting friends in their spare time. Gorshkova likes almost all kind of movies ‘as long as it is a good one’, while Butikov prefers foreign over Russian films.

Their long-term goal is the 2014 Olympic Winter Games in Sochi. For this season, however, they want to place in the top three at Russian Nationals and qualify for the European Championships. They are currently scheduled to compete at Skate Canada and the NHK Trophy.