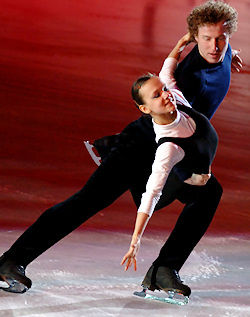 Russia's Lubov Iliushechkina, 16, and Nodari Maisuradze, 20, perform to Queen's We Are the Champions at the 2008 Junior World Figure Skating Championships Gala.

Moscow, September 2008. Lubov Iliushechkina and Nodari Maisuradze are on the ice in the “Blue Bird” club in the north of the Russian capital, performing their junior short program under the watchful eyes of coach Natalia Pavlova. They land a side by side double Lutz and a double twist, but then Iliushechkina takes a hard fall on the throw triple loop. Pavlova switches the music off and the skaters come to the boards.

“It had to go wrong, the way your position was on the take-off. Let’s start again with the twist,” said Pavlova, as she switches the music back on. On the next try, Iliushechkina hits a beautiful throw triple loop, but Pavlova is not yet pleased. “Why were you holding your leg so long? We don’t have enough music for that,” the coach explains.

Iliushechkina and Maisuradze were training hard in preparation for a busy season. It paid off. The reigning World Junior silver medalists, who are only competing in their second season together, easily won gold at their first Junior Grand Prix (JGP) event last week in Ostrava, Czech Repulic.

“It’s weird,” said Maisuradze. “Even though we competed at the World Junior Championships, this was our first Junior Grand Prix event of our career and it was our first competition of the season. We hope that we will continue the season the way we started it. We weren’t able to show the maximum of our (free) program in Ostrava,” he cotinued. “In some places we were cautious as some elements aren’t perfect yet. I think we’ve started to show more ‘grown-up skating’ this year.”

The team will compete again this week in Gomel, Belarus at JPG Golden Lynx. They are also slated to compete in their home country at Cup of Russia in November.

When Pavlova first observed the team in St. Petersburg in May 2006, she felt they were a hopeless case. “Liuba was overweight and Nodari’s father had been begging me for a month to take his son,” said the experienced pair skating coach. “He was skating somewhere in the Lenoblast (region around St. Petersburg), and nobody wanted to take him on. At that moment, I had no other couple, so I agreed to try to team them up just to have something to do.” Pavlova was then taken by surprise by the commitment of her new students. They wanted to do pairs, and they wanted it to do well.

Iliushechkina had come from Moscow. “A big thank you to my single skating coach Liubov Anatolievna Fedoshchenko, who suggested me to do pairs and took me to St. Petersburg to Natalia Evgenievna (Pavlova),” the 16-year-old said. “I felt I was lagging behind in singles, and I’m rather small and suitable for pairs, so I agreed to try pairs.” She began skating singles at four or five years of age while going to an open air ice rink next to her kindergarten. “I wanted to skate because I wanted to do something different from what the other kids were doing,” Iliushechkina recalled.

Maisuradze began skating when he was about three and a half years-old in his hometown of Lipetsk. When he was 12, he moved to St. Petersburg as his coaches in Lipetsk had left and he wanted to continue. For one year, Maisuradze trained with Alexei Urmanov, then he went to a club outside St. Petersburg because there was more ice time.

Both skaters remember their first try out very well. “It was so uncomfortable,” Iliushechkina recalled. “Right at the beginning, it was awful,” Maisuradze added with a smile, “but after 30 minutes, it was ok.” They had to start from scratch as both had no experience in pair skating. “Skating together was the hardest part,” said Maisuradze. “For almost one year, we mostly focused on skating together and we didn’t really work much on elements.” Iliushechkina also had to learn something else. “Natalia Evgenievna (Pavlova) told me that the man is the boss in the pair, so I try to listen to him,” she said with a mischievous smile.

On September 11, 2006, Pavlova and her students moved to Moscow as Pavlova was offered a contract there. This is when their real training started as they only had a few sessions in St. Petersburg before the summer break. Pavlova did not rush them and took the time to get the couple ready. In May 2007, they participated in an exhibition in Moscow – their first public appearance. In fall of 2007, they competed only inside Russia and were ranked fourth at senior nationals and third at junior nationals (which qualified them for Junior Worlds in March 2008).

Junior Worlds was their very first international competition, and although they made a few mistakes, they did well overall and claimed the silver medal. “I think we fulfilled our task last season,” commented Iliushechkina. Her partner, however, disagreed. “We didn’t fulfill it completely,” said Maisuradze. “We could have skated better at Junior Worlds.” Nevertheless, finishing second and winning the free skate was not a bad start for such a new and inexperienced team.

The new season started early for Iliushechkina and Maisuradze. They only had a break of two weeks before traveling to an off-ice training camp in Sochi in June, followed by two on-ice training camps. They started training in their “Blue Bird” ice rink in July. Both programs are new this season. “First, we wanted to change only our short program, but then we felt that our old free program looked bad compared to the new short program and so we made a new free as well,” Iliushechkina explained. “We’ve changed most of the connecting moves anyway.” They are now skating to Prologue by Lorena McKennitt for the short and to a selection of music by Edvin Marton in the free.

Pavlova feels that her students have progressed a lot over the summer. “We’ve worked hard on the overall quality as well as the skating skills,” the coach noted. “They have significantly improved. When we were at the test skate (in August), we got a lot of positive feedback. They had nice lines and moved more freely.”

However, Pavlova complains that there is not enough ice time in the club. “When we started out here, there was no ice hockey yet and we had six hours of ice time. Now we’ve only got two in the morning and one and a half in the evening. I have four pair teams now, and this is just not enough ice time.” Currently the two younger couples come on the ice about half an hour later and the others leave half an hour earlier to avoid congestion.

Both athletes mainly want to show “the beauty of skating,” as they put it. “We want to show skating as it used to be,” underlined Maisuradze. “We don’t want to just focus on levels of elements.” “Originality is our strong point,” added Iliushechkina. “We had an idea for the twist, but unfortunately it’s not compatible with the rules. The frames for the rules are too narrow.” Perhaps the team will be able to show their variation for the twist in an exhibition program. “What I like most about skating is the feeling of satisfaction after a good performance,” Iliushechkina noted. “We both really like to perform in front of an audience.”

Coach Pavlova is very happy with her current top students. “They are really hard working. They came out of nowhere. In these two years, they have accomplished as much as others have in four years. I don’t have to push them. On the contrary, I have to even restrain them a little.” At first, Pavlova wanted the couple to skate at the senior level only this year, but then she felt they need more exposure, competitions, and experience. “We will go to senior Nationals and we want to qualify for Europeans and Worlds,” said Maisuradze. “We also want to go to Junior Worlds and win there.”

Maisuradze names Elena Berezhnaya and Anton Sikhuralidze and Alexei Yagudin as his idols in skating. Iliushechkina’s role model is Aljona Savchenko, and her favorite couple are Aljona Savchenko and Robin Szolkowy. When asked to describe her partner, she answered without hesitating: “He is stubborn, demanding, understanding, and sometimes explosive.” Maisuradze, however, had to think for a moment before he finally shook his head and said: “I can’t really describe her. She is different from others. There is only one in a million like her.”