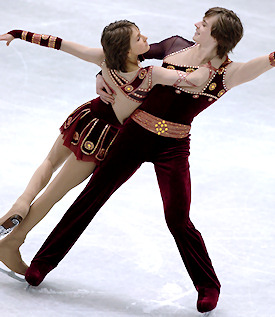 Pair skating has a long standing tradition in Russia, and unlike in many other countries, young skaters switch early from singles to pairs. One example are Ksenia Krasilnikova and Konstantin Bezmaternikh, who are, at 17 and 20-years-old, experienced pair skaters. They are the current Junior World and Junior Grand Prix Final Champions.

“When I was four, we moved (from Krasnoiarsk) to Perm and my mother put me into figure skating when I was five,” recalled Krasilnikova, who turned to pair skating at the age of 10. “I’m from Perm, meaning that I always lived there,” said Bezmaternikh. “When I was three and a half years old, my parents put me on skates, and they took me to figure skating classes when I was four years old. I skated under my first coach until I was six and then I switched to another coach until I was nine. When I was ten, I went to the Tiukovs (pair skating coaches), or rather they took me.”

Krasilnikova has never skated with another partner, while Bezmaternikh had a few try-outs and practiced with other girls before teaming up with her in 2003. Both were drawn into pair skating immediately. “I liked to skate pairs,” said Krasilnikova. “We did all kind of new elements and lifts.” The lifts are currently her favorite element and she has never been afraid or them or the throw jumps. Bezmaternikh recalled that he watched pair skating practice in his club as a young boy and was impressed by what the couples did on the ice. So when the Tiukovs asked him to try it, he happily agreed.

Valeri and Valentina Tiukov are husband and wife and have been coaching in Perm for more than 40 years. They specialize in pairs and are constantly building up new and young teams, contributing significantly to the success of the Perm figure skating school. Among their students were well-known pair skaters such as Andrei Khvalko (now a World Pro Champion with Elena Leonova), Rashid Kadyrkaev and Maxim Trankov. Currently, the Tiukovs have seven pairs in their group. Conditions in Perm, however, are not the best.

“As for the ice, I think, nowhere is it like it is there,” Bezmaternikh revealed. “We have an old ice rink, and nothing has been renovated. The ice can be like in waves. The ice machine was made in Russia in a car factory. You don’t really know what it is and it can break down which happens rather frequently.” The coaches complained about the lack of sponsors for their students and the school. “Our skaters receive only skates and the team uniforms, nothing else,” Valentina Tiukov pointed out. “Perm is achieving good results, but the local authorities don’t support us.”

Despite the less than ideal conditions, Krasilnikova and Bezmaternikh have been developing well. In their debut at the 2006 World Junior Championships they won the bronze medal, following up with another in 2007, although Krasilnikova was sick with the flu during the competition. They claimed the title at their third appearance last March in Sofia, Bulgaria. “You can give good ice to some people and nothing comes out of it,” Bezmaternikh noted. “Others will skate on bad ice and the result will be totally different.”

Bezmaternikh is a relaxed guy who likes to joke and have fun, while his partner is more quiet and serious. Asked about their relationship, Bezmaternikh laughed: “We are like cat and dog! We can quarrel about everything, beginning with the off ice training over transportation and the whole life!” Both have their own circle of friends and don’t spend too much time off the ice together, but they are supportive of each other and actually are getting along well.

Krasilnikova finished the 10th class this summer and will finish school next year, while Bezmaternikh is studying at the Pedagogical Institute. Both skaters, however, have to study with tutors and to pass exams externally as they are focusing on their practices and are spending a lot of time abroad. “I’m passing my exams when I’m at home,” Bezmaternikh shared. “Of course it’s not always working out, because the teachers aren’t always available when I have time.”

In their spare time, Krasilnikova likes going to the cinema and watching comedies, while Bezmaternikh hangs out with his friends and attends “sound competitions,” as he put it. “It’s about studying and working with sound,” he explained. “My friends are preparing everything and I’m come to help them or I just sit there and observe the process, because everything can be useful in life.”

When asked how to describe each other in three words, Krasilnikova had to think for a while. “It’s difficult,” she said. “He is nice, good natured… I don’t know what else to say.” Bezmaternikh answered with a twinkle in his eyes and without hesitating: “Energetic, dynamic, and not completely reasonable.”

The coaches decided that the couple should skate at the junior level for one more year as they are still age-eligible. “On the one hand, we would have preferred to compete at the senior level,” Bezmaternikh explained, “but on the other hand, our level isn’t yet good enough to leave the junior ranks and to end up right away in the top three of Europe or the World. We can fight for something like the fifth place, but for the top three it’s still a bit early for us. So we can stay in juniors for one more year to get closer to the top level.”

In order to get to that other, higher level, the couple worked with a new choreographer in Moscow this summer, with former ice dancer Anjelika Kirchmajer. She created two new programs for them. At press time, the skaters weren’t sure of the the title of the short program, but the long program is set to music from the Pirates of the Caribbean soundtrack. Both skaters like their new programs.

“It’s different, of course,” said Bezmaternikh said. “We put our soul into the program and we are trying to tell something through it. I think they are more interesting than what we did before. Our step sequences are more like dance steps now.” In the past, they have worked on the side-by-side triple toeloop, but Krasilnikova couldn’t practice it a lot last season due to injury. As a result, they didn’t include it into their programs at Junior Worlds.

This summer, however, Krasilnikova has been working successfully on the triple Salchow. “For now we have the triple Salchow and a sequence of two double Axels in the program, but no triple toe,” she said. “We also improved our lifts.” For her partner, all elements are equally important and there is no element that he doesn’t like. “You can’t afford not to like something,” underlined Bezmaternikh. “You have to like the element in order to perform it well. If there is an unloved element, you can’t stop doing it. You have to like it, whether you want to or not.”

Bezmaternikh doesn’t want to single out any strong points of the team either. “You should not feel your strong points, (because) they are always weak. (Stanislav) Morozov aborted a lift at the European or World Championships. This is his favorite element, as far as I know, because others told me that he didn’t understand how he could miss the lift. He felt the lift is his strong point, and what happened in the end? The lift went wrong. So, you can’t be sure of one or the other element. There is no strong point. Nothing is perfect, there is always something (to improve). That’s not only true for people, but also for cars and computers. There is always something not perfect, and where does this imperfection come from? From man, because man didn’t do a perfect job, and man himself is not perfect either,” the skater said.

For Bezmaternikh, skating isn’t only about winning. “To me, the spectators are the most important, and not a placement. You go out and try your best and hope that the audience will enjoy it. You can’t only skate for the judges or for a result. Everybody has to appreciate it, otherwise there is no beauty. You can have a good technical basis, even if you can’t glide, everybody still would say, ‘what a great element’. But what comes after the element? Nothing.”

Bezmaternikh is also pleased that one element was removed from the free program. “The idea is right, because otherwise it’s only a connection-element, connection-element. We need variety not only to show elements but the character of the pair,” he said.

The skaters prepared for the new season in an off-ice training camp in Beta in the south of Russia and at the training base of Novogorsk near Moscow as there was no summer ice in Perm. Their first competition is the Junior Grand Prix in Mexico from September 10 to 14, but they haven’t yet been assigned to their second Junior Grand Prix. They also have been selected to compete at one senior Grand Prix, like last year, and will be at the Cup of China.

The team is also looking forward to the first combined junior and senior Grand Prix Final in Korea in December. “That should be good,” Bezmaternikh said. “The juniors can learn from the seniors. The seniors can also see what kind of younger generation is coming up, and the younger ones can watch the older generation.”