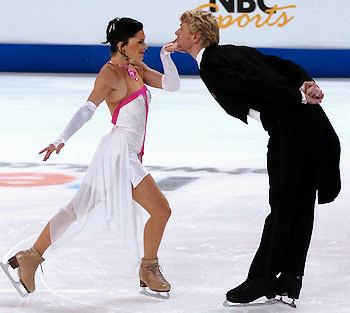 Skate America is the first of six events of the International Skating Union (ISU) Grand Prix (GP) series and is being held at the Comcast Arena, Oct. 23-26, in Everett, Wash.

Approximately 55 skaters from 14 different countries are competing for points and global prize monies totaling $180,000 in U.S. dollars. The points will go toward qualification for the Grand Prix Final of Figure Skating in which the top six competitors from each discipline will be invited to compete for a total purse of $272,000 U.S. dollars.

The skaters were seeded and invited for the six GP events according to the results of the 2008 World Figure Skating Championships. Competitors who finished first through sixth place in each discipline are considered seeded and were assigned to two GP events by drawing, while those who placed seventh through 12th, were invited.

Next priority was given to skaters who had the next highest ranked and/or who achieved a seasonal best score which was equal to or better than those who placed seventh through 12th at the ISU World Championships 2008.

Skate America kicked off on Oct. 24 with the Compulsory Dance.

Isabelle Delobel and Olivier Schoenfelder stand atop the leader board after the Viennese Waltz with a performance that was both smooth and refined.

“We are very pleased with our performance,” Delobel said. “We like this dance and we felt very good out there tonight.”

The current World Champions showed a European panache in their skate that was highlighted by a strong dance hold throughout, as well as willowy lilt in their upper bodies that may have made the difference between first and second place.

“We feel no additional pressure in being the World Champions,” Delobel admitted. “We just love to figure skate and make every element good. We just try to be very ready to compete and we work very hard at home to make that happen.”

The French scored far below their personal best in this phase of the competition, but was able to hold off Americans Tanith Belbin and Benjamin Agosto by a little less than a point with a segment score of 38.49.

Belbin and Agosto, skating their first competitive compulsory dance since Belbin fell at last year’s World Championships, claimed to feel well prepared after a coaching change in the off-season.

“It felt really enjoyable out there today,” said an accomplished Agosto. “I felt like we did a good job with the base that we have been developing. We are moving in the right direction, and the next time that we do this dance in [Cup of] China, it will be stronger and bigger.”

The American champions skated with a newfound confidence that has been absent from their compulsories in the past. Belbin, while much improved, showed signs of pressure on her face if not in her performance as she took the ice.

“I was very nervous,” expressed Belbin, “but thankfully our new coaches have been really working on our knee bends and strengthening our legs. It was the first time that we did a compulsory dance at any event when we weren’t shaking the entire time.”

With a total of 37.63 points for their performance, Belbin and Agosto are within reach of moving up the standings with a stellar performance in the Original Dance.

Finishing in third place are Great Britain’s Sinead Kerr and John Kerr. The non-traditionalists skated an inspired program that demonstrated a hunger to move up the international ice dance ladder.

The Kerrs, who have come to be known in skating circles as performing innovative programs in both the Original and Free Dance portions of the competition, have never really been known as compulsory dancers. This time, however, the Scots were able to earn a personal best score of 34.37, keeping them in line for their first Grand Prix medal of any color.

“The thing is that in the compulsories, our personalities get taken out of the equation,” John explained. “The secret is to be able to fit that personality into the routine. Compulsories are very much a part of the fabric of ice dancing, so it is very interesting to try to make that work for us.”

Pernelle Carron and Mathieu Jost of France are currently in fourth with a score of 32.26 – also a new personal best. The French silver medalists are competing in their fourth season together and are looking to earn their second Grand Prix medal.

“Usually I feel like I am more nervous for the compulsory than any other phase of competition,” revealed Bates, “but this is the first time out where I felt very comfortable and confident. Today we didn’t really have any added pressure on ourselves since we are the second American team behind Belbin and Agosto. We are here to learn and I am pleased with how well we handled ourselves.”

With a score of 31.81, Samuelson and Bates were well received by both the judging panel and the crowd.

“We have no regrets tonight,” added Samuelson. “We felt strong and over our feet, and we did everything that we have trained to do. We couldn’t ask for anything more from ourselves.”

Trailing the Americans are Katherine Copely and Deividas Stagniunas of Lithuania, followed by Russians Ekaterina Rubleva and Ivan Shefer.