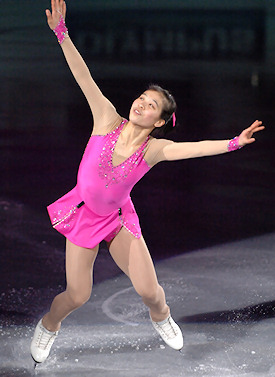 Vancouver’s Mira Leung has a good chance of competing in a second Olympics when the Winter Games come to her hometown in 2010. She finished 12th at the 2006 Olympics in Torino, Italy. Leung is the three-time defending silver medallist in senior ladies in Canada and has been on the podium since 2005, so an Olympic spot seems likely for the talented teen.

“It would mean a lot to me to compete in an Olympics in my home country and home town,” Leung said. “It’s definitely a once in a lifetime chance. Nationals was held in the Pacific Coliseum and we have had National Team training camps there, so I’m familiar with the arena.”

“It was my first Four Continents and I felt it was my best international competition,” Leung stated. “They said it was a season best but it was also my personal best so I was really happy about that. I got more experience there and I was happy to skate in Korea.”

Leung’s goal last season was to have a good year internationally and to skate two clean programs at Four Continents and Worlds. She managed her best two placements in the ISU Grand Prix series, placing fifth at both Skate America and Trophée Eric Bompard in Paris. She will open this season at the ISU Grand Prix Skate America in Everett, Washington, just a short drive from her home in Vancouver. Her second event will be the Cup of China. “My goals are to have podium finishes at my Grand Prix events,” she said. “I’m happy about the Grand Prix assignments I got.”

Leung started skating when she was three. “When my mom put me on the ice, I was like a fish in water,” Leung said. She landed her first triple Salchow and triple toeloop when she was only eight. Other than the triple Lutz-triple loop, Leung has also practiced other combination jumps, but does not use them in her programs.

Joanne McLeod has coached Leung since she was 13 except for a brief period in 2006. “I was so happy with my skating at the Olympics, then I came back and Joanne said she didn’t want to work with me anymore,” Leung said. “I was so surprised. I started working with another coach, but after two months I went back to Joanne and asked her to coach me and she took me back.”

During the summer, Leung practiced for two to three hours a day, five days a week, in Burnaby – a suburb of Vancouver.

McLeod choreographed both of Leung’s programs. “For the 2008-09 season, I am keeping my programs from last season, because the long worked well for me last season and the short was new at Nationals,” Leung said. She is using La Bayedere by Leon Minkus for the short and Piano Concertos No. 2 and 3 by Sergei Rachmaninov for the long. At press time Leung was unsure of what music she would use for this season’s exhibition program.

“I changed my short on Christmas Eve last year,” Leung explained. “I wanted to change it after Trophée Bompard because it wasn’t working for me. I was looking for a classical piece and Joanne suggested it. I felt that Pink Panther didn’t really bring out my full potential and that I could do better with a classical program. So both my programs are classical. Classical music is easier for me to interpret because I’ve had piano training since I was three. I finished studying in grade ten but I still play for fun.”

The elements Leung plans to use in her short program this season include a triple Lutz-double toeloop combination along with a double Axel and a triple flip. For her long, Leung plans to include three combinations: triple Lutz-triple loop, triple flip-double loop, and double Axel-double toeloop-double loop. Her solo triple jumps will be the flip, Lutz, Salchow, and toeloop.

“The long is the same as last year,” she noted. “However I’ll be taking out a spin (as per new ISU regulations), and I’m happy about that rule change because it means that there is more time for all element levels to be done properly in the program.”

Leung finished high school this summer, but has no university plans yet. “That’s my off-season project,” she said. “It will be something to do with computers because I have an affinity for technology and computers. I want to do something that will combine computers and skating. Maybe with a side career as a coach.”

Off ice, Leung said, “Sometimes I like to read comedies, sometimes fantasy books. I like to watch television, play video games and go on the Internet whenever I can. I designed a web page once just for fun. I don’t watch movies often. I collect key chains and pins from all of the places I’ve been.”