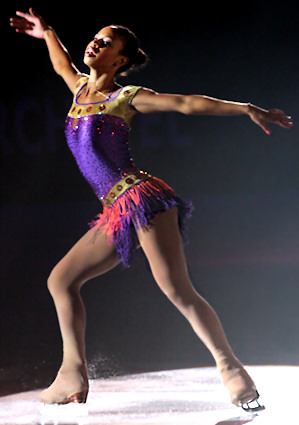 With only one Junior Grand Prix (JGP) event left to go before the Final, USA’s Kristine Musademba currently leads the ladies in standings with fellow countrywomen Alexe Gilles, Amanda Dobbs, and Becky Bereswill trailing close behind. However, USA’s Angela Maxwell and Japan’s Yukiko Fujisawa are also up for the running and will inevitably change those stats after next week’s event in Sheffield, Great Britain.

Nevertheless, Musademba feels that just qualifying for the JGP Final would be a great honor. “I would be very proud and excited to compete there considering the obstacles I have overcome this year,” she said.

One of those obstacles was the coaching change from Nina Stark-Slapnik to Traci Coleman in April 2008. “I think that it’s hard for every skater to switch coaches,” noted Musademba. “Things changed a lot for me after the switch and I had to find my path again. There were a lot of steps I had to take to get back on track but I overcame those steps and I have brought myself into a much better place.

Musademba’s first event of the season was the Liberty Open which was held July in 15-19, 2008 in Ashton, Pa. The 15-year-old, who placed sixth in the short and fifth in the long, felt she didn’t do her best. “I did land a triple Lutz-double toeloop combination in my long program for the first time, so I was very excited about that,” she said. “It was a very good learning experience and gave me a very good clear idea of what I needed to work on.”

In August, Musademba competed at and won her first JGP event in Courchevel, France. She won the short program with only a minor mistake on her triple Lutz. She also won the long despite a problem on her triple flip. “I fell forward a bit on the landing,” she explained, “and then stuck my toe in the ice for a double toe, but never got up in the air.” In the end she scored a total of 143.02 points to win the event by over eight points.

After such a rough start in the season, the young skater was elated to find herself on the podium. “It felt amazing to win gold!” said Musademba. “Doing my first clean short of the season and a pretty good long was very pleasing. I was overwhelmed with pride because of how far I had come since the beginning of the year. I couldn’t stop smiling on the podium!”

Musademba was also happy with the way she was able to connect with audience. “That’s one of the things I’m working on applying to my skating, my connection to the audience, so I feel like I made some steps in the right direction in Courchevel.”

The teen from Silver Springs, Md. found Courchevel to be one of the most beautiful and peaceful places she has ever visited. “It was almost surreal to be so high up in the French Alps and I felt to so lucky that I was able to visit a place like that in my lifetime,” Musademba said. “My mother and I went up a Gondola in the French Alps that I believe was around 2,000 kilometers high. At first it was a little but scary, and my mother was very reluctant to go, but as soon as we saw the beautiful views were forgot about our fear. We were surrounded by beautiful mountains and skies and we could even see Italy from a distance. It was a very special experience. The food was also great! I loved the French bread there and I ate so much of it!”

A month later, Musademba competed at her second event in Madrid, Spain where she debuted some changes in her long program. “It’s funny,” she lamented, “the changes worked out great, but the things I didn’t change, I had some trouble with!”

“I wasn’t really concerned as much with my place,” recalled Musademba. “After the short I was pretty disappointed about my performance because I knew I could do much better than that. I just felt like I made a lot of sloppy mistakes in the program. I was nervous going into the long but I was not thinking about my placement or moving up. I was focused on doing a better job than I did in the short.”

In the long, Musademba underrotated and fell on her opening triple Lutz, and later stepped out of a triple toeloop. “I was having trouble with the Lutz during practices,” she explained. “I just wasn’t very confident going into the jump in the program. I felt that the step-out on the triple toeloop was a silly mistake. I didn’t even realize that I had stepped out of it until I had finished my program!”

Despite the mistakes, Musademba won the long, and with a total score of 127.64 points, captured her second consecutive JPG gold. It was close, though, as Bereswill was right on her heels with 127.27 points.

“I was very surprised!” said Musademba of her win. “I really thought that I was going to be in second after I skated my long. I was a bit shocked when I saw the scores come up, but I was very grateful that I ended up on top. Having such a close competition also taught me that even if I make a mistake in the program, it’s so important for me to always keep fighting through the program. Little things can make all the difference.”

Like Courchevel, Musademba found the audience very supportive in Madrid. “Especially during the exhibition,” she recalled. “They were giving standing ovations to almost everyone, and they made all the skaters feel really welcome. Many young girls and boys came up to us for autographs and pictures. It was very nice to be appreciated and I really enjoyed skating there.”

Musademba also found the scenery in Madrid to be equally as amazing as Courchevel, but in a different way. “The city of Madrid was so beautiful with all of the the old and historic buildings, statues, shops, museums and restaurants. After the competition, I was able to tour around the city and see all of its amazing architecture.”

Her favorite place was the Prado Art Museum. “I almost couldn’t believe the amount of artwork they had there that dated back centuries,” said Musademba. “I was very excited to see one painting in particular, Las Meninas by Diego Velázquez, because I studied that painting in my art classes all through 4th to 6th grade. I used to only see the painting in books or on a slide. To see the actually piece right before me was incredible!”

And travels are not over for Musademba, who is half Filipino and half Zimbabwean. The JGP Final will take place in Goyang City, South Korea, Dec. 10-14. In preparation for the event, she plans to raise her consistency. “I also just want to focus on doing my absolute best.” Though she will be working on her jumps, she knows other elements need work as well. “I think my worst move right now would be my spread eagle. It needs a lot of work!”

Musademba, who placed fourth in the Junior division last season at U.S. Nationals, plans to compete on the Senior level this year. When asked about making the Junior World team, she felt that it would be a wonderful honor, however, her primary focus is to keep focusing on training and improving overall. She also credits her parents who have shown a great deal of support.

“My mother and father have sacrificed a lot to help me get to where I am today,” said Musademba, who began skating at age 7. “They have both attended my JGP events and my mother has attended all of them. I feel like my friends and family really support me the most in what I do and they are what helps me stay positive and motivated.”