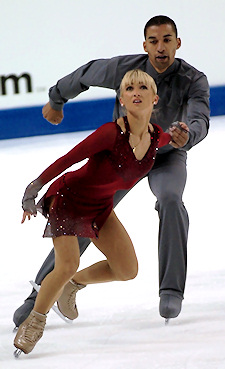 Germany's Aljona Savchenko, 24, and Robin Szolkowy, 29, walked away with the 2008 Skate America title after winning the Long Program.

For everything that Russia’s Maria Mukhortova and Maxim Trankov did well yesterday in the short program, they were punished for in today’s free skate. After skating a magical short program to take the overnight lead, the Russians completely fell apart in the free skate, falling a total of three times and finishing in third place on the strength of their scores from the previous night.

Instead, World Champions Aljona Savchenko and Robin Szolkowy walked away with the 2008 Skate America title leaving their closest competition in the dust.

The Germans skated a haunting program to music from the Schindler’s List soundtrack and Adagio by Albinoni, using difficult connections and technical elements to score a total of 180.77 points in the competition.

“Of course we are happy to have won the competition, but we have a lot of work to do,” admitted Szolkowy. “This is a good start, but it gives us something to improve upon next time.”

The highlight of the technical elements was the opening triple toe loop-triple toe loop sequence that melted directly into a powerful triple twist. However, the German Champions made two mistakes at the end of the program – popping a throw triple Salchow coming up short on rotations on their final combination spin.

“The throw was just a technical mistake,” said Savchenko. “We will work with our coach to find out what the issue was with the spin at the end and make changes as necessary so that we can receive credit for it in the future.”

In second place, after placing third in the short program, is USA’s Keauna McLaughlin and Rockne Brubaker. The U.S. Champs took advantage of the Russian duo’s mistakes, and skated a romantic program to selections of music from West Side Story.

“Today was a personal best for us,” noted Brubaker, “and heading into Skate Canada next week, this gives us a lot of confidence to do well there.” “I was obviously very happy with the skate today because I hit all of the throws and stood up on my jumps,” McLaughlin added. “I just enjoyed myself a lot.”

After opening with a nice split triple Lutz twist lift, McLaughlin and Brubaker landed a triple Salchow-double toe loop combination. The lone error in the program was a slight miscue by Brubaker on a planned triple toe loop. Even so, the Americans finished with a total of 172.69 points – a new personal best for them, and received the loudest ovation of the night.

“The crowd was great, and it was special in that we are American and skating at Skate America,” Brubaker explained. “This was a good program, and we just look forward to improving on this as the season progresses.”

Mukhortova and Trankov opened nicely with a triple twist to their The Lady and the Hooligan routine, but things went downhill from there. On the next element, a triple Salchow, Trankov fell to the ice and only received credit for attempting a double due to his underrotating the jump. After a nice lasso lift, Mukhortova fell on the throw triple loop. The nail was in the coffin when she then fell on a planned triple toe loop jump.

“Being in first place after the short program did not affect us today,” Mukhortova pointed out. “It wasn’t so good today in that we made a lot of mistakes, but there still is a lot of competitions this season, so we will just do better.”

The Russians ended up with a total of 167.67 points in the competition, holding off a charge from Canada’s Meagan Duhamel and Craig Buntin, who beat them in the free skate.

Skating to Tosca, Duhamel and Buntin skated competently and surely, but had some small errors that kept them from stepping onto the podium. After a nice triple toe loop-triple toe loop sequence, the Canadian bronze medalists struggled with both of their throw jumps, but finished strong with elements that earned level threes and four.