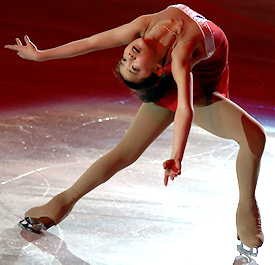 American skating sensation Caroline Zhang will open her competitive season in November by competing at Skate Canada in Ottawa, Ontario, then follow up later in the month by competing at Trophée Eric Bompard Cachemire in Paris, France. This will be her first appearance at both events.

“I really like my Grand Prix assignments for this season,” Zhang enthused. “Skate Canada and Trophée Bompard will be fun. I’m really excited about going to Paris because I’ve never been there before. Actually, I think all of the Grand Prix events would be fun to do. There’s nowhere that I wouldn’t like to go.”

Zhang made her senior Grand Prix debut last season, opening with a bronze medal at her first event, Skate America, then taking silver at the Cup of China, home of her primary coach, Mingzhu Li. She placed fourth at the ISU Grand Prix Final in Torino, Italy.

“I really thought competing on the Grand Prix circuit was exciting and fun,” Zhang said. “Everybody is real good on the senior circuit and it was hard to compete with them. I didn’t really have any expectations for that year. I just wanted to get some experience. I loved being able to compete in front of a big crowd, and compete against some of the best skaters in the world. It motivated me to work harder.”

During the summer, Zhang did two 45-minute sessions and two 1-hour sessions Monday through Saturday and usually three, one-hour sessions on Sunday.

“I’m doing more core training and weight training to help my jumps and to build up my stamina,” Zhang explained. “I never used to do off ice training, but now I’m working with a personal trainer a couple of times a week and I do 45 minutes every day by myself. I also have some other off-ice classes and run.”

Li and Sondra Holmes train Zhang, who practices in Artesia, California. She has worked with Li for four years and with Holmes for seven. “I knew of Coach Li when I was younger, because I saw her on TV coaching Lu Chen,” Zhang said. “Then, when I was competing at Southwest Regionals, I actually met her. I didn’t have a main coach at the time so we decided to get together and see if it clicked. It did, and I’ve been working with her ever since.”

Zhang has not been hampered by a recent growth spurt. “I grew about 2-3 inches,” she stated, “but it didn’t seem to throw my jumps off at all. On the other hand it helped me get more height in my jumps and improve my speed. I’m trying to get more speed going into my jumps and more consistency. I need to jump higher with better rotation. I want to work with what I have and make each element better. That’s what I have to do to be world champion.”

“I was working on my triple Lutz-triple loop this summer,” Zhang continued, “and a few triple Axels for fun. My goal is to get levels 4s on all my spins and high levels on my footwork this year. I hope to be able to add new jumps to my programs.”

Although she is in great demand, Zhang did only two shows during the summer. “I did a show for my home club, All Year FSC, and the audience was so supportive,” she said. “I am a member of the Junior Board of my home club and we helped put together a charity event for the Merivale Home for Girls. We were so happy to be able to bring them a fun event.”

Both of Zhang’s programs are new for the 2008-09 season, just as they were for last season. But this is the first season that Zhang has worked exclusively with Lori Nichol as her competition choreographer. For the past two seasons, Nichol has done one of her programs and Tom Dickson has done the other.

“Lori and I spent four our five hours listening to hundreds of pieces of music and we finally found the perfect ones,” Zhang stated. She will be using Leon Minkus’ La Bayadere for the short and Tchaikovsky’s Sleeping Beauty for the long. The pieces reflect a return to her classical music comfort zone, unlike last season when she branched out by using Spanish Gypsy by Ray De Tone for her short.

“I’ve always liked to use classical music in my programs because I had ballet when I was young,” Zhang continued. “I took ballet from when I was four until I was nine, once or twice a week.”

Karen Kwan again choreographed Zhang’s exhibition program. She plans to use Lullaby for a Stormy Night performed by Vienna Teng.

The teenager listens to all kinds of music, from pop to classical. “I like to listen to classical music and I still play my violin on weekends, but I think the last time I played the piano was last Christmas,” Zhang stated.

She also likes to read, draw, and play on her computer. “I was so excited when Brisingr came out,” she said. “That’s the sequel to Eragon and Eldest. I have reread that series at least 3 times.” This summer, she took up a new hobby, knitting. She also plays softball occasionally.

After she finishes competing, she would like to tour professionally, coach skating, and have a job helping animals. “I love all kinds of animals and I’ve had lots of pets,” she said. Currently, she has one dog, a Pomeranian named Toffee Lutz Zhang. “Even though skating is really demanding, I think I want to study to be a veterinarian. That’s just one of the things that I’m interested in. I’m trying to get good grades in science right now so maybe I can maybe pursue that dream in my future.”

Her dream this season is to “medal in my Grand Prix events, go to Worlds and have fun,” she said. “It would mean so much to me to compete in my home city in the biggest ISU event of the year! But just making it to Worlds would be special in itself though.”