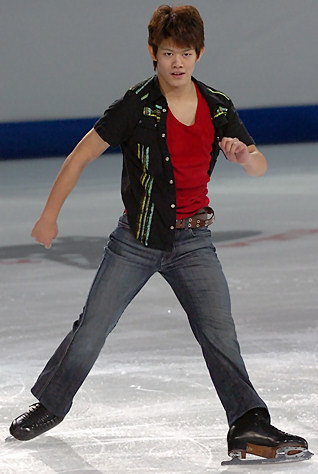 Japan's Takahiko Kozuka, 19, is currently second in the Grand Prix Standings for the Men's division.

Takahiko Kozuka finally made a breakthrough in the Grand Prix series this season. The 2006 World Junior Champion, who is now competing in his third senior Grand Prix season, is much more consistent than he was in the past.

The 19-year-old won the gold at Skate America in Oct., and then followed up with a silver medal at Trophée Eric Bompard two weeks ago. As a result, he has qualified for his first Grand Prix Final and is currently second in the GP standings for the Men’s division.

The breakthrough comes at the right time as Japan’s leading male skater, Daisuke Takahashi, is undergoing knee surgery and will be out for the whole season.

Kozuka, a shy young man with a sweet smile, attributes his successful start this season to his training. “I’m training in Yokohama and at Chukyo University, and this summer I had a lot of time for training,” he said. “Chukyo University is reserved for elite skaters, therefore I was able to give better performances than before.”

The student of Nobuo Sato also revealed how he changed his training. “My coach let me skate my free program in three parts at 1:30 minutes each, so I trained each part separately. It’s like training sprint instead of long distance so I can focus on each part. When I’m training the whole free program in one piece, it’s more exhausting, not just physically, but also mentally.”

“We’ve done this kind of training since last year, but only now I understood why my coach made me train that way,” Kozuka added. He also did some additional weight lifting training to strengthen his leg muscles. He trains mostly under Sato, but his father, Tsuguhiko, who competed in the 1968 Olympic Winter Games in single skating, is part of his coaching team as well.

Kozuka’s goals remain unchanged after he medaled in his two Grand Prix events. “I want to skate clean each time,” said the student from Nagoya. “Maybe I’m a little more nervous (after having success early in the year), but I just have to train to become stronger mentally and to be able to turn nervousness into confidence.”

Another important goal for Kozuka is to land the quad in competition. The two quadruple toeloops he attempted at Skate America and Trophée Eric Bompard were downgraded and he fell. “I will continue to try the quad, because I need to do it in competition sooner or later anyway to earn more points,” he explained. “In practice, I land one out of five, which is better than last year.”

Yuka Sato, the 1994 World Champion and daughter of his coach, picked the music for his programs this season. Kozuka is skating to Dave Brubeck’s Take Five for his Short Program, and Romeo and Juliet by Nino Rota for the long.

“At first we wanted to do a jazzy exhibition program,” Kozuka revealed “but then we reconsidered and used it for the short program.” The rather romantic free program is something new for him. “I’m not such a dreamer. I prefer mathematics over poetry or literature. I’m a bit shy and my program components are weaker, and this program can help me to improve my components.” He added that he likes the short program better, “but after the Lutz combination, I also like the free program,” he laughed.

Interesting enough, Kozuka risks a triple Axel late into the long program as his next to last jump. “The music is commanding that it’s time to do a triple Axel there,” he explained. He is happy to get the bonus for difficult elements in the second half, but he would like to have even more points for it.

The Japanese silver medalist names stamina, spins and skating skills as his strong points. “Since this season, I also can feel the music and the rhythm in the short program better. In the free program, it’s harder as I get tired and I have to focus on my jumps.” Kozuka thinks that the transitions are still a weak point in his skating and wants to add more connecting steps and moves in between his elements.

Kozuka knows that with Takahashi’s injury, Japan’s hopes in Men’s singles rest on him and Nobunari Oda, but he doesn’t want the pressure get to him. “I’m not someone who is chasing after titles,” he pointed out. “Yes, I can achieve a higher score than last year, but my results depend also on what the others are doing. I just want to focus on my own performances and I’m happy when I’m skating well.”

Kozuka is now looking forward to the Grand Prix Final in December in Korea. “I’ll train fully. I want to keep my focus and show my best performances there.”