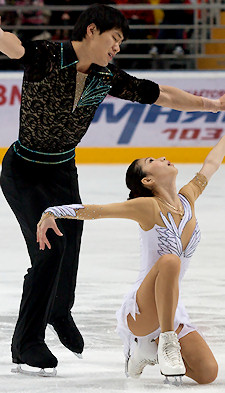 Dan Zhang and Hao Zhang of China are in a comfortable lead after their Short Program to Mendelssohn's Riding on the Wings of Song.

Dan Zhang and Hao Zhang of China won the Pairs Short program with an impressive eight point margin. Though Dan Hao was not able to hold onto the landing of her triple Salchow, the 2008 Cup of China Champions demonstrated improved unison and understanding of the music in their routine to Mendelssohn’s Riding on the Wings of Song.

“We’ve worked with Igor Shpilband and Maria Zueva before the season started,” said Hao Zhang. “We turned over to ice dancing specialists for help because we wanted to improve our style and expression. That is something that we needed.”

The team also executed quite complex transitions without any hesitation or glitches. Their high triple twist received a level three and positive Grades of Execution (GOE) as did their throw triple loop and their non-jumping elements. The team scored 67.06 points to place first, but had mixed feelings about their performance.

Russia’s Yuko Kawaguchi and Alexander Smirnov finished a distant second with 58.76 points after Kawaguchi fell on the opening of the side-by-side triple toe loops and Smirnov later failed to catch her properly on a level two triple twist. Kawaguchi also stepped out of the landing on a throw triple loop, however, their non-jumping elements received level fours and positive GOEs.

The European bronze medalists’ balletic program to The Swan brings out the softer side of their skating, however, they seem to be able to blend it perfectly with the power they need to execute the most difficult elements. Though the performance was definitely less than perfect on the technical side, the team seems to improve their expression from one competition to the next.

“We are used to skating on very good ice,” said Smirnov, “but I don’t think that our mistakes have anything to do with the ice. I suppose that we tried too hard and began to overturn some elements. We’ve got better skates, but we didn’t succeed in everything today. We made mistakes on the difficult elements, but the other ones were good.”

Tatiana Volosozhar and Stanislav Morozov of the Ukraine failed to capitalize on the momentum they had coming into this competition after a surprising second place finish at Cup of China. Despite improved flow and confidence, the team missed their opening element (Morozov fell on his jump on the side-by-side triple toe loops) and later made another costly mistake when Volosozhar fell on the throw triple loop.

Nevertheless, the Ukrainian Champions were able to execute an excellent level three triple twist, as well as levels three and four non-jumping elements. Their routine to Mr. Holland’s Opus by Michael Kamen looks quite promising, and the students of Ingo Steuer collected 58.34 (33.54/26.80) points for a close third place.

“Of course we are disappointed with our skating today,” Morozov later answered at the press conference. “It’s difficult to be satisfied when you’ve failed twice.” “I think that we have performed not bad,” added Volosozhar. “Although we had an ugly fall. Sometimes there are better falls, but today I stretched down the ice.”

Senior Grand Prix Series debutants Ksenia Ozerova and Alexander Enbert of Russia found themselves in the fourth place with 52.26 points. Skating second in the first warm-up group, the Junior Grand Prix medalists produced a level two double twist, side-by-side triple toe loops, and level four spins and lift in their energetic performance to Leon Minkus’ Don Quixote. The couple seemed to find it hard to believe that they skated as well as they did, especially after they performed a clean throw triple loop. Their obvious amazement added a very nice touch to an otherwise Junior-ish program.

In contrast, teammates and fellow Junior Grand Prix finalists Lubov Iliushechkina and Nodari Maisuradze were not able to start their international Senior career well. The team opened their program with almost perfect side-by-side triple toe loops, however, Maisuradze’s blade somehow got caught in the ice and he fell and a second later, and Iliushechkina collapsed on the top of him. Fortunately no one was hurt in the accident, but the couple was obviously shaken by the experience and it affected the rest of their performance.

Iliushechkina also double-footed and stepped out of the landing of her throw triple loop, and the World Junior silver medalists found themselves rushing through the second half of their program to catch with the music. All more the pity for the fact that their choreography, in-betweens, and interpretation of Lorenna McKennitt’sPrologue were among the best in the field. They are currently in fifth with 49.96 points.

Monica Pisotta and Michael Stewart of Canada finished sixth with 47.86 points with an almost clean performance which featured a double twist, side-by-side double Axels, and a throw triple Salchow.