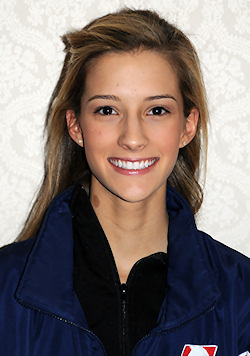 The gold medalist at the SBS ISU Junior Grand Prix (JGP) of Figure Skating Final for the 2008-09 season was USA’s Becky Bereswill, who is also a champion distance runner. The 18-year-old had qualified for the Final by winning silver medals at the JGPs in Spain and France, but was the sixth-ranked skater coming into the event.

“My goal was to qualify for the Final,” she said. “When I made it, I was happy I achieved my goal, but in the back of my mind, I wanted to medal. I knew it would be inspirational to be with the seniors and hoped to skate well.”

Only fourth after the short program, Bereswill scored almost 15 points above her previous best (83.24) to set a new personal best overall with 98.01 for the free skate and 146.69 total points.

“I knew we were all very tight after the short program, so it was anyone’s game,” acknowledged Bereswill. “I wanted to score two personal bests for the long and overall so I was happy I did that.”

“I was very excited for the free skate,” she continued. “I was nervous at first, but then I thought about performing the music and telling the story the way Marina (Zueva) taught me, the nerves went away. I just went with that feeling and took everything one step at a time and I just really enjoyed my time out there.”

“Both of my programs are new,” Bereswill said, “but both are very different. John (Millier) told me I should look for music that I really care about. So I looked for music that is powerful and inspiring to me and it has really helped.”

“The short program is a very, happy uplifting piece of music,” she continued. “It has a lighter feel. The long is totally different. It’s very elegant and deeply emotional.”

For an exhibition program, Bereswill skates to Tiny Dancer by Elton John. “I always liked the song,” she said. “I listen to it when I’m on the ice and try to skate like a ballerina.”

Bereswill actually studied ballet with the Houston Ballet from when she was four until 13, and appeared in the annual production of The Nutcracker.

“Ballet really helped my skating and gave me great stage experience in front of a crowd,” she noted. “I liked ballet, but both skating and ballet were demanding more to reach a higher level and I couldn’t do both. I still take a class weekly.”

Bereswill also played the violin when she was younger. “I think it helped me to understand music and rhythm at a young age and that helped my skating,” she said. The willowy blond, who skates in senior ladies at U.S. Nationals, was a late bloomer, never making it past Sectionals until 2008. Last year, she was tenth in seniors at nationals.

“My senior program is a little more stretched out than my junior program,” she stated. “The only thing I’ve added is my spiral sequence. I love spirals and always work hard on them.”

Bereswill landed her first double Axel the day before her 12th birthday and her first triple Salchow later that year. “Jumps have always been a strength for me, ” she said. “My favorite aspect of skating is jumping. I’m working on different triple-triple combinations in practice now – mostly the triple Lutz-triple loop. I want it to be more consistent before I put it in a program though.”

Bereswill, whose first name is Rebecca Ann, started skating with her identical twin sister, Allison, when she was seven. “We went to a birthday party for one of our friends at an ice rink,” Becky recalled. “We liked it so much we wanted to have our own ice skates. For our next birthday, we got signed up for lessons and we’ve never wanted to stop.”

Allison competes at the junior level in the U.S. “I’m one minute older,” Becky said. “At home, we practice at the same time and it’s really fun having her there. Competing against her would be hard because we are so close. Hopefully, that won’t happen. We want each other to do our best.”

Tall enough to be a dancer, Bereswill has taken her bronze dance tests but not competed in dance. “I wanted to improve my skating skills for my singles skating,” she explained.

Megan Faulkner has been Bereswill’s primary coach for ten years although she also works with Mark Janoschak one day a week. She usually practices on ice for three hours a day, six days a week with another hour of off ice work.

“Next summer, I’ll be training harder with more running with an emphasis on building up my strength,” shared Bereswill. “I’ll also be focusing on my spins. I’d like to make them faster and stronger.”

Not that she needs to run too much more. Bereswill competes in track and cross country races for Episcopal High School, where she is a senior honor student.

Bereswill specializes in the half mile run and 4×800 meter relay. “Running was just something I picked up to help my skating,” she said. “Then the track coach recruited me to run.”

Off ice, Bereswill said, “I love being outdoors doing active things. My sister and I swim and play tennis and do other things together.”

She has applied to several universities, where she plans to study economics for a possible career in international business. “I plan to continue skating as long as I can and stay involved in the sport after that,” she said.