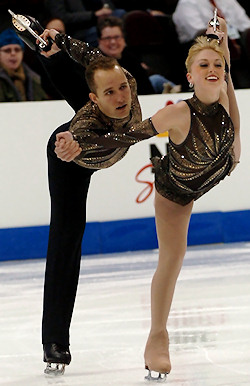 Caydee Denney, 15, and Jeremy Barrett, 24, who partnered up in June, placed first in the Pairs Short Program.

A stunning afternoon of Championship Pairs short programs left the arena abuzz after a team that has been together for just six months upset the defending champions in a very close race.

“I’m not sure that it has sunk in yet,” said a dreamy-eyed Barrett, as he met the media for the first time. “We’re just extremely happy that we skated so well.”

After forming their partnership in June, the leaders competed over the summer at the Indy Challenge. They skated well enough to warrant a trip to the Nebelhorn Trophy in Germany to compete in their first international event as a team.

“As soon as we got together, our partnership just clicked,” Barrett shared. “We had a chance this year to compete against the World Champions in Germany after only skating together for a few months. It was a really great experience, and I think that it prepared us to compete here.”

Teams can sometimes go their entire career to develop the kind of skating that Denney and Barrett have cultivated in such a short time. Their side-by-side spins in particular showed the craftsmanship of seasoned veterans, and they also demonstrated technical prowess in landing both their side-by-side triple toe loops and throw triple flip.

“We just work really hard,” Denney confessed. “We have a natural style that compliments each other, and our basics are so similar that it has been very comfortable for us to develop so far.”

At the Eastern Sectional Championships, Denney (15) and Barrett (24) won the right to compete at their first national championships, and came to Cleveland to skate well for themselves.

“The most important thing for us to focus on is how we skate,” Barrett explained. “All we hoped to achieve was to skate as well as we do in practice, and we did that.”

The leaders scored a total of 61.51 points for their short program, taking a .39 point lead into the freeskate over defending champions Keauna McLaughlin (Los Angeles FSC) and Rockne Brubaker (Broadmoor SC).

McLaughlin (16) and Brubaker (22) showed signs of vulnerability in their short program, making two costly errors that kept them from continuing their recent dominance on the U.S. scene.

“I thought that it could have been better,” reflected McLaughlin. “Our big tricks were not really there, but I thought that we had good presentation.”

The reigning champions did earn high levels on the rest of their elements, however, they were disappointed with the way they skated nevertheless.

“We were a little cautious, and I think that it did us good to get that one out of the way,” Brubaker explained. “This is still a step in the right direction in getting through the season and getting this program where it needs to be.”

McLaughlin, who has been fighting off a virus before she arrived in Cleveland, and Brubaker earned a total of 61.12 points for their efforts in the short program, and head into the freeskate in a virtual tie with the leaders.

“We’re really looking forward to the freeskate,” Brubaker declared. “We really like our program, and we are going to take everything that we learned in the short and incorporate it into the free.”

In third place are perennial podium fixtures Rena Inoue (All Year FSC) and John Baldwin, Jr. (All Year FSC), who are skating in their ninth consecutive championships. For the past six seasons, the Olympians have been on the podium, and Baldwin has competed in every U.S. Championships save one since 1986.

The reigning silver medalists changed their approach to the short program for this competition, abandoning their usual attempt at a throw triple Axel, and opting instead for a safer throw triple loop. In addition, they no longer focus solely on the puzzle that is code of points, and have made performing their number one priority.

“Of course we want to do well in the standings,” Inoue admitted, “but we want to make sure that the audience leaves with a positive impression of our skating. We want them to come back for more. We just got too caught up in the levels of every element that it almost made us want to shoot ourselves in the head, so we have found it more positive to focus on performing for the audience.”

In addition, Inoue (32) and Baldwin (35) added the triple twist back into their program – an element that they have not competed in recent years.

“We are very proud of putting that element into our program,” Baldwin said. “It isn’t perfect, but we are putting it out there. It is something that we are very excited about.”

Inoue and Baldwin scored 61.11 points for their short program, only .40 point behind the leaders, leaving the top three in a virtual tie heading into the freeskate.

Finishing in fourth place is the team of Caitlin Yankowskas (Colonial FSC) and John Coughlin (Kansas City FSC), who are in their sophomore season as team, and have some ambitious goals for this competition.

“We want to be on the podium, and be selected for the World Team,” admitted Coughlin. “We would also love to compete at the Four Continents Championships in Vancouver so that we can skate on the Olympic ice. That would be an incredible experience.”

Yankowskas (18) and Coughlin (23) skated early in the competition, and got things started in a big way. After opening with a triple twist, the duo landed their side-by-side triple Salchows and throw triple Salchow with relative ease.

“I’ve been working on the timing of my jumps,” Yankowskas explained. “I have to really work on the technical side of my skating, and I am so glad that I was able to pull it together today.”

The Midwestern Sectional Champions skated well enough to earn 56.09 points, and could play the role of spoiler for any of the top teams who struggle in the freeskate.

“We thrive on being out there in competition,” said a confident Coughlin. “We skate in such a competitive environment where we are pushed every day. We are just always ready to go out there and compete.”

With a disappointing performance marred by two major errors, 2007 U.S. Champions Brooke Castile (Arctic FSC) and Ben Okolski (Arctic FSC) had to settle for fifth place in the short program. Castile (22) opened the program with a fall on her triple Salchow, and later made another mistake on the throw triple Salchow.

“I’m really unhappy with that skate,” said a disappointed Castile, as she fought back tears. “I can’t really explain what happened. We have worked really hard this season, and I don’t really know what happened.”

The former champs have their work cut out for them should they hope to earn one of the two berths on the World Team. Their score of 54.46 points might be too much to overcome in the freeskate.

“We have to completely forget about the short program,” said 24-year-old Okolski. “We can go into the long program with what we are used to doing, and that would be good.”