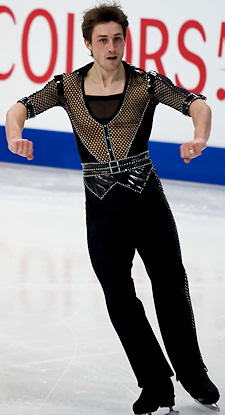 Brian Joubert (24) of France currently sits in first after the Men's Short Program.

Brian Joubert of France currently leads the Men’s field by more than five points after delivering an inspired performance to Rise by Safri Duo. The upbeat and energetic style suits the 2008 Worlds silver medalist perfectly and allows him to concentrate on his jumps, while his powerful skating style enables him to forge a strong bond with an audience.

Despite the fact that the Frenchman withdrew from the Grand Prix Final long program with an injury and later missed the 2009 French Nationals as well, he held nothing back in Helsinki. The 24-year-old landed a quad toe loop-triple toe loop combination, a triple Axel, and a triple Lutz of out steps.

Though Joubert received relatively low levels on his non-jumping elements (only two of his spins were graded a level four, while other elements were graded level two), he posted a new personal best of 86.90 (48.00/38.90) points.

“I am very happy,” said Joubert at the press conference. “Everything was clean and I did my new personal best. The warm up was difficult, but I didn’t care about it. I felt confident going to the ice. I know I can do even better at Worlds.”

Joubert admitted to being a little disappointed with the low levels he received on his footwork and spins. “I will work on them for the upcoming competitions to improve them.”

When asked about the fall he had during the warm-up, Joubert replied: “Actually I was almost happy to fall because I made few mistakes here in practice and the fall put pressure on me. I came here to win, I know that I can win and I want this third European title.”

Joubert revealed that he will be skating to music from the Matrix Reloaded and Requiem for a Dream soundtracks instead of Last of the Mohicans. “I did not feel natural and I did not like skating it (Last of the Mohicans) at practices and in competitions,” he explained. “The program does not tell a story. I just like the music. I changed it three weeks ago and it’s still new, so it might be difficult tomorrow. I will see.”

Tomas Verner of the Czech Republic finished second after he substituted the quad toe loop in combination with a triple toe loop with another triple. The defending champion was otherwise clean, landing a strong triple Axel and a triple Lutz out of steps.

Verner seemed comfortable with last season’s routine to Melodie en Crépuscule and Gypsy Swing, delivering one of the most proficient and artistically satisfying performances of the night. His step sequences were especially strong and the 22-year-old made excellent use of all nuances of the music. He earned a new personal best of 81.45 (43.90/37.55) points.

“My performance was not too bad,” said the Czech Champion afterwards. “At the Grand Prix I started with mistakes and I had to avoid that today. To start with a clean short program was a goal. To start with a triple combination was a decision done by my coach. That’s what the man at the boards is there for.”

“I enjoyed my performance today very much,” Verner later elaborated at the post event press conference. “One of the reasons why I came here is to bring figure skating closer to people. Seeing their faces and smiles when they cheered on my last straight line step sequence was amazing. I hope we’ll have the same audience tomorrow.”

Verner is keeping mum about his plans for the long program. “I cannot tell what I’m going to do tomorrow because my opponents are here. I’m the first skater in my group, so I have no other choice but to do everything I can and then see what the others do.”

The biggest surprise of the competition came from Samuel Contesti of Italy, who skated in the first warm up groups of the second half of the Men event. He finished third among 39 men with a clean and inspired performance to J’envoie Valser and Valse des Monstres. The skater, who is coached by his wife, Geraldine Zulini, and lists Peter Gruetter (a coach of two-time World Champion Stephane Lambiel) as a part of his coaching team, landed a strong triple Lutz-triple toe loop combination, an equally good triple Axel, and a triple loop out of steps.

Contesti also received a level four on all his spins and a level three on both step sequences, showing that his lack of international exposure in recent years has not affected his ability to fulfill the requirements of the judging system. In 2005, Contesti, who then represented France, made his debut at the European Championships, finishing ninth. In 2006, he switched to Italy after he was left off the French national team to sit out couple of seasons.

The changes don’t appear to hamper his ability to present his program as he placed third in the short with a new personal best of 75.95 (43.90/32.05) points – a major improvement over his previous best score of 60.06.

After his performance, Contesti refused to comment beyond the brief “I am happy,,” which Guetter explained to be “a part of his mental preparation” (not giving interviews during the competition). However, as a third place finisher, he was obliged to attend the press conference and elaborate on his feelings.

“I would like to thank my new federation for their support and the good training conditions,” said Contesti. “I want to thank all the people who help me. It was a good job today. Tomorrow it will be another day.”

When asked about overcoming difficult times and his future goals, the 25-year-old replied: “I just trained to skate and now I am here and I could skate. I am happy about that. This is like any other competition for me and I just want to do my job. This is the way I have to look at it. I’m competing like all the others. There is nothing special about it.”

Belgium’s Kevin van der Perren finished fourth with an uninspired but courageous performance to Night on the Bald Mountain. His routine featured a triple Axel, a triple flip-triple toe loop combination, and a triple loop out of steps. The 26-year-old, who had an operation on his hip last year, re-injured his leg during the practices in Helsinki. He considered withdrawing from the competition up till the very last moment, but in the end decided to go for it.

Considering the circumstances, the Van der Perren’s skating was a stunning success. With three clean jumping passes and level three and four non-jumping elements, the skater earned 75.80 (42.30/33.50) for his efforts.

“I did not notice the performance,” admitted the Belgian afterwards. “It went past really fast for me. This morning I did not know if I was going to compete. It’s (hip) been going on and off. Until now I could not really prepare for the Championships, and yesterday morning I felt pain.”

Yesterday he could barely walk. “So I did not know what to do,” continued Van der Perren. “Then I just decided what does not kill me is going to make me stronger. It was painful.”

Alban Preaubert of France finished fifth in the short program with 73.50 (40.80/32.70) points. The 23-year-old stepped outside his ‘comfort zone’ and performed to a more lyrical and bluesy piece in contrast to his usual upbeat and audience-friendly routines.

Though Preaubert’s performance was clean and had nice flow, the overall quality of his skating was not good enough to convincingly interpret this style of music. The French bronze medalist also failed to pick up bonus points for the grades of execution. His elements, while technically clean, lacked the extra quality present in the programs of the skaters who placed ahead of him.

“I am ‘OK’ with my performance,” Preaubert said. “I skated my short program clean each time this season. It isn’t difficult for me because I don’t do a quadruple jump. Considering the pressure, it is fine.”

When asked to elaborate on the pressure, the Frenchmen replied: “Because I skated well at the beginning of the season, I thought that maybe I can medal here if I skate very well. I need to skate like I can skate.”

Sergei Voronov of Russia finished sixth (71.29 points) with his performance to music from The Godfather score. He opened his program with a quad toe loop-double toe loop combination and an impressive triple Axle, but stepped out of triple loop out of steps.

“It’s the third time for me,” stated Voronov regarding the mistake on the loop. “First at the World Championships…now at Europeans. I probably should exchange it for the flip.”

The Russian Champion, who is battling a reoccurring injury on his right foot, did not receive a level four on any of his non-jumping elements and looked preoccupied. His performance was delivered without his usual abandon and determination.

“To be honest, you can’t compare my skating in practices with my skating today,” Voronov later told the press. “It was much worse in practice. I just couldn’t do anything. So I basically pulled myself together as good as I could. I wasn’t totally under my feet, but overall the performance was ‘OK’ for me.”

Kristoffer Berntsson of Sweden is currently in seventh place. The 26-year-old missed both triple Axels and a triple flip out of steps in his entertaining and well choreographed routine to the music from the Amélie soundtrack.

Russia’s Andrei Lutai is in eighth place, followed by Yannick Ponsero of France and Ari-Pekka Nurmenkari of Finland.