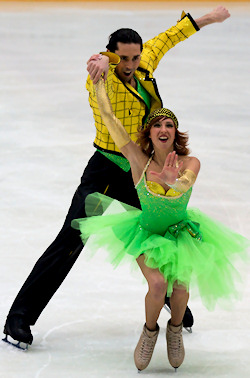 Jana Khokhlova and Sergei Novitski easily defended their overnight lead to finish first in the original dance, while teammates Ekaterina Rubleva and Ivan Shefer pulled up to second. Kristina Gorshkova and Vitali Butikov slipped to the third place.

Clearly a class of the field at the championships, Khokhlova and Novitski were relaxed and playful in their interpretation of the dance, which combined Sam’s Blues with an instrumental version of Puttin’ on the Ritz.

Lack of worry about their placement was especially evident during the side-by-side steps during which the skaters enthusiastically waved to the crowd. Despite their lack of concentration, most of their technical elements, including a spectacular lift and spin, were well done. The only glitch in the program was a minor mistake by Khokhlova on the twizzle during the side-by-side step sequence.

The team received 61.35 points for the original dance for a total of 99.44 points – more than ten points ahead of the second place finishers.

Skating last and right after Khokhlova and Novitski, Rubleva and Shefer lived up to the impression left by their stronger training mates. The team delivered their dance to St. Louis Blues and Sing, Sing, Sing with a lot of gusto and excellent flow. The skaters have replaced a lift (which did not receive a level four during the Grand Prix events as the judges could not clearly see if Rubleva was in a difficult hold or not). Last year’s silver medalists received 55.09 points (88.63 points total) and moved one spot up in the classification.

Anastasia Platonova and Alexander Grachev recovered some ground which they lost in the Compulsory to finish third in the original dance (53.87 points) and fifth overall (79.68 points). The students of Svetlana Alexeeva and Elena Kustarova, who nearly ended their careers two seasons ago, delivered a powerful and expressive program. However, despite the good chemistry between them their program seemed to lack the particular character prescribed by the original dance requirements.

In contrast, Gorshkova and Butikov, who drew the first starting number, excelled in expressing the character of the period with their interpretation of Harry Warren’s Too Many Tears, however, the transition to Bei mir bist du schoen (at the end of the program) appeared somewhat abrupt. The team also ran into problems with their side-by-side twizzles, which they performed out of unison and nearly ran into one another at the end of the sequence. They were otherwise clean and received 53.74 points for the program with 87.53 points in total.

Ekaterina Bobrova and Dmitri Soloviev attacked their Mack the Knife program with a lot of abandon, however, in the end, they had to settle for fourth place. The 2007 World Junior Champions had an excellent flow throughout the dance, but Soloviev nearly dropped his partner coming into the final pose. The couple earned 53.37 points (86.60 points total).

Natalia Mikhailova and Arkadiy Sergeev rounded out the top sixth with 46.39 points and 76.03 points in total. The students of Alexander Zhulin used Latin rhythms for their original dance, using the famous Perhaps, Perhaps, Perhaps rhumba. Despite the questionable music choice, the character was there, but the skaters ran into a lot of problems with technical elements: the twizzles were out of unison, the spin was very slow, and Sergeev had a very noticeable stumble during rotational lift.