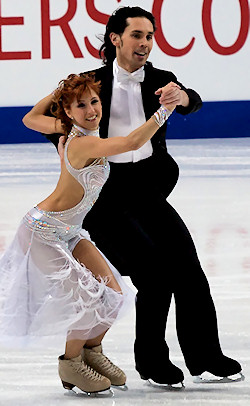 Russia's Jana Khokhlova and Sergei Novitski perform the Finnstep in the Compulsory Dance.

The 2009 European Figure Skating Championships are being held Jan. 20-25 in Helsinki, Finland at the Hartwell Areena. It is the third time since 1977 that the city has hosted this event. Approximately 178 skaters from 35 different countries are competing for points and global prize monies totaling $350,000 in U.S. dollars.

In addition, the top three skaters and couples per discipline having earned the most World Standing points during the 2008-09 season, will be awarded with a World Standings Bonus.

All skaters/teams will compete in the Short Program and Compulsory/Original Dances with the top 24 proceeding to the Free Skate/Free Dance.

The competition kicked off on Jan. 20 with the Compulsory Dance and Pairs Short Program.

The Finnstep was chosen as the Compulsory Dance (CD) for this event. The dance is based on the 1995 Original Set Pattern dance by Finns Susanna Rahkamo and Petri Kokko, and was choreographed by Martin Skotnicky. The Finnstep, which is a fun, fast, and ballroom-type quickstep, is making its international ISU debut at this event.

Jana Khokhlova and Sergei Novitski of Russia lead the field by more than a point after a flawless performance. Italy’s Federica Faiella and Massimo Scali and Sinead Kerr and John Kerr of Great Britain are currently in a close second and third, respectively.

Khokhlova and Novitski were one of the few teams who managed to skate both sequences of the dance with appropriately light and sharp expressions. They also payed close attention to the lines and intricate footwork without any obvious efforts, and posted a new seasonal best of 37.43 (19.08/18.35) points.

“We really like the Finnstep,” said Khokhlova afterwards. “It is such a happy and fun dance. The character of the Finnstep suits us very well.” “Our goal is always to achieve the maximum,” added Novitski. “We want to win.”

Faiella and Scali also delivered a very strong dance, but Scali faltered towards the end of the second pattern and the team did not receive any additional Grade of Execution (GOE) points for the last segment.

“There was a little stumble,” explained Scali, “but I saved the twizzle. This is a difficult part of the dance. We arrive from the choctaw and we have to do a double twizzle, and maybe our position was too open and I wasn’t ready to twizzle. It is one of the two or three critical parts of the dance, especially in the second pattern when you are tired.” “This is the first compulsory dance where the man has to twizzle,” noted Faiella.

Their dance was otherwise the most confident of the evening, with excellent flow and close positions. However, while on the technical level it was very competent, their interpretation seemed to lack some sparkle. They sit in a close second with 36.03 (18.08/17.95) points.

The Kerrs also maintained excellent flow throughout the dance, but in some places their lines were not quite as strong as those of the teams who placed ahead of them. The team from Scotland, however, succeeded at capturing the playful character of the Finnstep and received 34.89 (17.32/17.57) points to finish in a close third.

“It felt fantastic to do the Finnstep here in Finland,” said Sinead. “It’s a happy and enjoyable dance and I’m glad if that came across. There are usually not a lot of people watching the compulsory dance, but here there was a warm atmosphere.”

“I was always big fans of Susanna Rahkamo and Petri Kokko,” added John. “It was very enjoyable to do an adaptation of their dance.”

Nathalie Pechalat and Fabian Bourzat of France were nearly flawless in their interpretation of the Finnstep as well, and chose to take a slightly different approach to the dance. They intentionally overemphasized the expression in places, and the style worked perfectly for them together with unusual costumes (Pechalat was wearing a pink tutu).

“It is a rather difficult dance because of its rhythm,” said Bourzat, “and it does not include deep edges.”

The French Champions, which now train in Moscow under Alexander Zhulin, were nevertheless smooth and confident throughout, and scored 34.38 (17.32/17.06) points for fourth place.

“We had practiced the Finnstep only for a few weeks,” shared Pechalat. “We did our best, so we are satisfied. Now we are happy to be done with the compulsory dance and we are looking forward to the original and free dances. Being the top ranked French couple does not really affect us. We are hoping to medal here.”

Skating first among medal contenders Oksana Domnina and Maxim Shabalin of Russia opened their performance by miming opening a bottle of champagne and taking a sip of the wine.

Domnina explained that the opening section of their dance was inspired by ISU’s description of Finnstep, but confessed that she didn’t remember whose idea it was. “We read about it (reference to champagne) in the rules and thought that this could be interesting.”

However, while the first sequence of their dance was appropriately sparkling, Shabalin slipped off the edge towards the end of the second pattern.

“It was just a mistake,” said Shabalin. “I can’t say what happened now. It is still a mystery. We did some skate performances of the Finnstep on our practices in costumes, but it looks like it was not enough.”

The defending champions withdrew from the 2009 Russian Nationals citing unspecified ‘medical reasons’, and therefore their performance in Helsinki was the first time that they performed the Finnstep in competition. The overall impression of their dance was not as sharp and secure as that of some of other couples, however, their basic skating skills were still strong and they received 33.53 (16.28/18.25) points for fifth place.

Pernelle Carron and Matthieu Jost of France round up the top six with a seasonal best of 33.21 (16.74/16.47) points. Though their footwork was light and fast as prescribed by the rhythm, the team from Lyon seemed to lack precision and confidence in some places and their pattern differed from that of other teams.

“We started to practice in summer,” said Jost. “We had a seminar for one week and the dance was good at the nationals. We are happy about the seasonal best.”

Anna Cappellini and Luca Lanotte are currently in seventh with 32.58 points, followed by Hungary’s Nora Hoffman and Maxim Zavozin (31.13) who are making their European Championship debut.