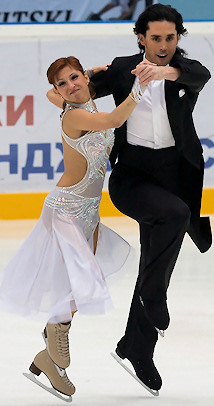 Jana Khokhlova (23) and Sergei Novitski (27) perform the Finnstep for the Compulsory Dance at the 2009 Russian National Figure Skating Championships.

Approximately 73 skater (17 men, 14 ladies, 11 pairs and 10 ice dance couples) gathered in Kazan to compete for the medals of 2009 Russian National Championships and a chance to represent Russia at the European and World Championships.

The Finnstep was chosen as the Compulsory Dance (CD) for the national championships. The dance is the most recent addition to the compulsory dance roster and is based on 1995 Original Set Pattern dance by Finns Susanna Rahkamo and Petri Kokko, choreographed by Martin Skotnicky. The compulsory dance has never been performed at international events so far and is scheduled to make its first international appearance at the 2009 European Championships in Helsinki.

While the Finnstep is an excellent preparation step for the couples challenging for the national team, the new dance turned out to be too difficult for the lower ranked couples and hardly any performances displayed the confidence and command one usually sees in this section of competition.

Oksana Domnina and Maxim Shabalin withdrew from the event for medical reasons.

In the absence of their main rivals, defending champions Jana Khokhlova and Sergei Novitski (Moscow) easily won the first part of ice dance competition with an engaging and light-hearted performance of Finnstep. They were the only couple who showed total command of the dance throughout both patterns, and were able to express the lilting character while maintaining good speed and timing. They scored 38.09 (19.39/18.70) points to lead the field by nearly five points.

“We have not yet figured out what kind of dance the Finnstep is,” confessed Khokhlova. “We have worked hard on it only for a week, but still have time to examine it closer before the Europeans – to understand all the intricacy and particularities of it. What are they? I think it’s a combination of completely different parts. Some parts of the dance are classic compulsory dances: lots of edge work, deep lobes and so on. But another part is all about small hops on toe picks and we are supposed to express easiness, speed, fun and laugh during it. The rules say that the dance is like champagne bubbles: sparkling with joy and we have to make this impression on the audience. But overall we like it: it’s interesting and convenient.”

However, none of the couples succeeded in setting themselves apart from the leaders with their execution of the new and challenging dance. While the major part of the footwork was correct, the teams found it difficult to maintain the same level of performance during the second pattern and faced problems with the some sections. For Gorshkova and Butikov, the most challenging part of the dance appeared to be the one right in front of the stop in the middle of the pattern. The 2008 World Junior Championships bronze medalist used the required sequence of stationery steps to catch up with the music.

“[The] Finnstep is an interesting dance,” commented Gorshkova. “I love it! But it feels more like an original dance rather than compulsory, but it is what makes it special and attractive.”

Rubleva and Shefer’s twizzles at the end of the pattern looked a bit wild, and while their ‘sparkling’ interpretation of the rhythm was stop on, their timing was not as good. In contrast, Bobrova and Soloviev maintained good flow throughout the dance, but their performance lacked the particular expression required of the style.

“Our initial reaction to the dance was shock,” said Rubleva. “We just did not understand how to approach it. But once you start to take it apart, you realize that it’s ‘doable’ – that there is certain logic in it. I guess we could say that we like it now. It’s a nice dance – fast and upbeat and it suits us.”

Natalia Mikhailova and Arkadiy Sergeev were eliminated out of the content for the silver medal and a trip to Europeans. The students of Alexander Zhulin, who only scored 29.64 (15.19/14.45) points for their performance and their dance came across as rushed.