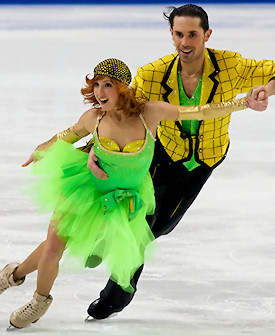 Russia's Jana Khokhlova and Sergei Novitski perform their Original Dance to Sam's Blues and Puttin' on the Ritz.

Defending European Champions Oksana Domnina and Maxim Shabalin of Russia, who stood in fifth after the compulsory dance, withdrew from the competition due to medical reasons. According to the medical bulletin, Shabalin’s knee injury became more acute. Their coach Natalia Linichuk explained that it was caused by the fall in the Compulsory Dance.

“Maxim fell in the Compulsory Dance on his left knee,” stated Linichuk, “the one that was injured before and where he had two surgeries. The knee was sore and swollen and we decided not to risk further injury and they withdrew. They both were very upset, because they wanted to compete here. This morning they left for Moscow. Maxim will see his doctor there and undergo therapy on his knee. The World Championships are too close to risk anything.”

Teammates Jana Khokhlova and Sergei Novitski defended their lead from the compulsory dance with a clean and confident performance to Sam’s Blues and Puttin’ on the Ritz. The skaters performed right after their main rivals and rose up to the challenge.

The Russian Champions opened with a trademark spin with changes of positions and a level four series of synchronized twizzles – the first half of which went perfectly with the music. Compared to their performances earlier in the season, the team replaced the curve lift with another one. Novitski later explained that they did it to maximize the score. “Although it was quite an interesting lift, we somehow never got maximum of points for it. Apparently we did the right thing, because we had a higher technical score.”

The 2008 World bronze medalists also improved the flow on both steps sequences – especially the final one which received a level four. The team received 62.17 (32.90/29.27) points for for first place and are currently lead the field by nearly five points with 99.60 points in total.

“We did all the elements clean and only got a level 3 on one element (non touching midline step sequence),” said Khokhlova at the press conference. “We are happy that we were able to do this. We were in an especially good mood today. The audience was so supportive and when we were announced, we were so well received.”

Even though their performance was not quite as playful as the one they gave at Russian Nationals, the couple seems to handle the pressure of being in the lead well. They were confident and expressive throughout the dance.

“We were in the lead but it doesn’t mean much,” said Novitski. “Let’s say we learned from our experience at the World Championships last year. Yesterday someone told us ‘the first place has not been reserved for you,’ and this person is absolutely right. We’ll have to fight for it and there are no weak competitors here.”

Khokhlova agreed, adding, “It’s a very exciting moment. Two thirds of the competition are over. We got our small medals (for being first coming into the free dance) and now we want to fight for the big ones. I wish everyone to skate their best tomorrow. As for us, we will skate to win. We are determined to fight for this title.”

Federica Faiella and Massimo Scali of Italy were also strong, however, the team had to work to maintain difficult positions in the spin and Faiella later had a wobble on the first twizzle. The team otherwise delivered an entertaining and well done dance to music from Irving Berlin’s Follow the Fleet. They really got into the spirit of the period with their costumes being a perfect imitation of the outfits from the original show. The Grand Prix Final participants received 59.03 (30.90/28.13) points, a new seasonal best, and have 95.06 points coming into free dance.

“We really felt like we went back [to the era of] Fred Astaire and Ginger Roger’s dancing,” said Scali at the press conference. “The elements were pretty good. My partner was a bit out of balance during twizzles and we only got a level three for them and the diagonal step sequence was also a level three. But our aim had been to get a level four on the spin and we did it.”

The skaters, however, are not unaware of the new expectations from them. “This is the reason we are finally ready for the podium,” said Scali. “The pressure is really difficult to handle, but today we felt the music and the rhythm. When we arrived here, we were not thinking about withdrawals of other couples. We were thinking about a medal anyway, with or without (the help of) other couples. Of course it was now easier to be second when the French and the Russian couples withdrew. We could be happier with second place (if everyone had been here). It was a new situation for us and I think everything was great.”

The team admitted that they felt more comfortable during the original dance than they felt in the compulsory. “I think the hardest part of the competition was the Finnstep,” joked Scali. “Afterwards, everyone was more relaxed, more comfortable. Believe me, everyone felt this way. It’s a new dance with new positions and steps.”

Sinead Kerr and John Kerr of Great Britain maintained their third place to claim the first small ISU medal of their career. The Scots were visibly nervous at first, but quickly got into the spirit of the dance and entertained the crowd with their rendition of lindyhop and swing rhythms.

Technically, though, their performance was not entirely flawless as John was off balance throughout the first half of the twizzle sequence. However, in terms of presentation, their routine was one of the most accurate and interesting interpretations of the prescribed period dances. The students of Evgeni Platov received 57.71 (30.20/27.51) for the dance and have 92.60 points overall.

“It went well, we had good energy today,” Sinead told the press. “We were nervous at the beginning, but once we got going it was good. The most important for us was to really dance the swing dance and consider the judges as if they were a part of the audience. We want to entertain. We skate well when we’re enjoying ourselves and we did that today.”

“I was actually more nervous today than I’ve been before during this season,” admitted John. “But as the music started and the audience began enjoying it, it really helped a lot, and after 50 seconds I was enjoying it too.”

The team also confessed that they are nervous now that they have a first chance to win an ISU Championships medal. “I’m happy that we don’t have a day off tomorrow,” joked John. “I would not have been able to use it, and now I’m really looking forward tomorrow.”

Skating last in the original dance, France’s Nathalie Pechalat and Fabian Bourzat placed a close fourth in this segment of competition with 57.56 (30.40/27.16) points. They currently have a total score of 91.94 points which puts them within striking distance of the podium.

The students of Alexander Zhulin performed a blues and lindyhop to It Don’t Mean a Thing, and once again, took a slightly different approach to the dance. While the choreography and interpretation of their routine does not exactly fit the ‘Roaring Twenties’ (part of ISU definition for this season’s OD), the smooth flow of the program highlighted their strong basic skating skills.

The French Champions were able to deliver all their elements without a glitch, something which they were not always able to achieve in the past. They were also able to preserve the character of the epoch, albeit a more subdued one than that chose by most of other couples.

“We are very pleased although there was pressure as we skated last,” Pechalat later said. “This was the best performance of the season and we beat our [seasonal] best by three points.”

“It was not easy to skate last,” agreed Bourzat, “but we did well and we had a good technical score. We are finally ready. Now we have the free dance left. This is our strongest part of the competition. We have worked very hard. We did shows after French Nationals (to polish the programs) and we saw our choreographers again.”

Teammates Pernelle Carron and Matthieu Jost finished fifth in the original dance and overall with 89.39 points (56.18 (30.30/25.88) for the dance. The team from Lyon convincingly interpreted Basin Street Blues and the choreography of their dance was once of the best in the field with all elements stylized to match the character of the music and linked together by smooth connecting moves.

“It was good,” said Jost afterwards. “We were into our dance. We like this ice and we are feeling confident here.”

Compared to earlier in the season, Jost changed his costume as the previous (white) jacket “was difficult to skate in and keep it clean with all the make up”.

Their training mate Olivier Schoenfelder came to Helsinki to watch the competition and support them. “He is one of my best friends,” said Jost. “Usually I am with him on every competition, so this time it is almost the same. He just talks to us, makes some jokes, makes us believer in ourselves.”

Anna Cappellini and Luca Lanotte of Italy finished sixth with a clean performance to Secunda’s Bei mir bist du schoen, but the couple only received a level three for their rotational lift as well as both step sequences. The quality of their elements was strong, allowing them to make up the difference in the basic value, and their skating skills were among the best in the field.

“I didn’t expect this music to be such a popular choice this season because it was actually very hard for us to find this piece of music,” Cappellini later explained. “We wanted to have the same song or melody to change from slow to fast. I am very picky about our music; I want to really like the music that I skate to.”

However, the choreography of their dance did little to help them interpret the character of the period, and the team relied mostly on the chemistry between them to sell the program to the audience and judges. The Italian silver medalists scored 54.38 (29.10/25.28) points for the dance and have 86.96 points in total.

“We felt pretty good today,” said Cappellini after the performance. “We don’t understand why we got a level three on the rotational lift, but I’m sure there is a good reason for it.”

Israel’s Alexandra Zaretski and Roman Zaretski, who created a completely new original dance since the Grand Prix series, placed sixth in the OD (54.38 points) and remain in seventh overall (86.96 points).

Nora Hoffman and Maxim Zavozin of Hungary, who stood in eighth coming into the original dance, dropped to 11th overall (77.96 points).