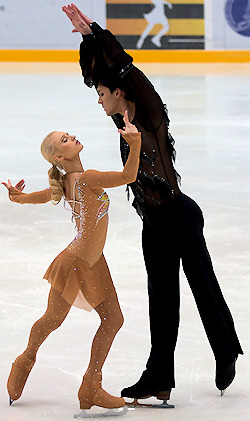 Maria Mukhortova and Maxim Trankov placed first in the Short Program with their Pink Floyd routine.

Coming off a disastrous performance in long program at the Grand Prix Final, Maria Mukhortova and Maxim Trankov delivered another clean run-through of their short program to Pink Floyd ‘s Nobody Home to win the Pairs Short Program competition. The skaters failed to execute a clean triple twist, but landed good side-by-side triple toe loops and a solid throw triple loop. The students of Oleg Vasiliev also had strong non-jumping elements and their program flowed well from one element to the next. They received 68.03 (37.49/30.54) points.

Yuko Kawaguchi and Alexander Smirnov, who were rumored to withdraw from the event due to illness, competed after all and placed second with 65.18 (34.64/30.54) points. However, their performance of the The Swan was marred by mistakes.

After executing a couple of clean triple twists during the warm up, Kawaguchi crashed on Smirnov’s chest during the actual performance, while Smirnov stumbled out the landing of a triple toe loop. The team was also out of unison on their side-by-side spins later in the program.

Their main rivals, Lubov Iliushechkina and Nodari Maisuradze, made a mistake on the side-by-side triple toe loops as Iliushechkina stepped out of hers and nearly ran into her partner. They only performed a double twist, but landed a clean throw triple loop. The choreography of their routine to Lorena McKennitt’s Prologue was one of the highlights of the event.

The 2008-2009 Junior Grand Prix Final Champions also executed a series of complex and seamless transitions, but in the end, they had to rush to catch up with the music. The students of Natalia Pavlova placed fourth with 57.58 (30.24/27.34) points.

Anastasia Martiusheva and Alexei Rogonov, another team from the Junior Grand Prix Final, finished sixth (51.27 points) after Rogonov did not catch his partner properly on a triple twist. Martiusheva later fell on a throw triple loop landing, and the couple also nearly fell out of their final spin, finishing behind the music. The choreography, however, and overall level of presentation of their routine was good.