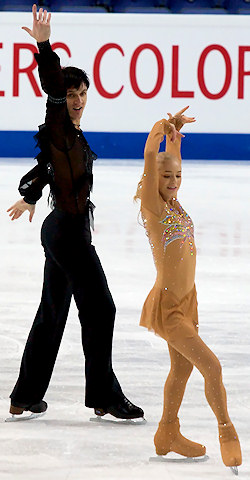 Maria Mukhortova and Maxim Trankov of Russia are currently in first place after the Short Program.

Mukhortova and Trankov delivered a clean and inspired performance to an orchestra version of Pink Floyd’s Nobody Home, opening with a clean triple twist and side-by-side triple toe loops which were almost in perfect unison. The 2008 European silver medalists then followed up with an equally strong throw triple loop and received a level four on all their non-jumping elements to post the highest technical score of the night.

The students of Oleg Vasiliev were also one of the few teams who executed side-by-side flying combination spins in excellent unison, and they moved seamlessly from one position to the next with the music. They currently lead the field with nearly a three-point margin with a new personal best of 69.62 (39.86/29.76) points.

“I am very happy,” said Mukhortova at the post event press conference. “It is a step forward for us. We did another clean short program and it was a pleasure for us to skate it.”

When asked about 2008 Skate America where they were in first after the short and fell apart in the long, Mukhortova replied: “Tomorrow will be another day. For us it’s important to overcome ourselves, to do things we do in training. We are not aiming at jumping over our heads. We just do not want to disappoint ourselves.”

“It was not easy to skate late in the evening and we skated last,” admitted Trankov. “Our goal was to skate a clean short program, so it was good. This is the second time we beat the World Champions in the short program, but it’s not about beating Aljona and Robin, it’s about competing with ourselves and doing our best. We are very confident with our short program and now we have to take this confidence into the free program. We were confident with our elements [in the short], so it wasn’t hard to skate for us psychologically.”

“I think this was our best performance of the short program,” added Mukhortova, “although we had good skate at Nationals as well. We did a small step forward. I think we could have done a better triple twist, but we really feel this program and it is close to our heart and soul.”

Skating to music from the Lost in Space soundtrack, Savchenko and Szolkowy presented a different approach to pair skating: instead of traditional complex transitions to lyrical music, the couple opted to do an upbeat and energetic routine in which the partners barely touch each other outside required elements.

While this innovative style usually works well for the students of Ingo Steuer, it puts a lot of pressure on the skaters to deliver a clean program lest a mistake breaks the mood and the choreographic concept falls apart. With such a slim margin of error, Szolkowy’s fall on the opening side-by-side toe loop cost them a lot. It wasn’t until the clean execution of their triple twist, preceded by an impressive throw triple flip, that they were able to recover and get back into the mood of the program. The defending champions nonetheless scored 66.64 (36.64/31.00) points for second place.

“[Throughout] the whole program I had the mistake in my head,” explained Szolkowy afterwards. “It hurt and I will be more sore tomorrow. I don’t really know what happened, because I did two perfect clean ones in the warm up. I felt in the air that the jump probably would be a little off, but I didn’t expect to fall.”

Kawaguchi and Smirnov also made a mistake in their program when Smirnov failed to catch Kawaguchi by her waist during the triple twist. Last year bronze medalists otherwise performed well, landing solid side-by-side triple toe loops and a clean throw triple loop. However, the levels of their non-jumping elements were not as high as those of their rivals and the students of Tamara Moskvina earned 65.38 (35.54/29.84) points to round out the top three.

“I am happy about our performance,” said Kawaguchi at the press conference. “We could not not get good level on some elements, but we have accomplished what we wanted and tomorrow we will skate better.”

“After Russian Nationals, Tamara Nikolaevna [Moskvina] made some changes to our training,” explained Smirnov. “We let her down by not getting all the levels today, but we are happy that we did all the elements clean. It’s better than before.”

Tatiana Volosozhar and Stanislav Morozov of the Ukraine are in a distant fourth with 56.20 (29.32/26.88) points. They opened their Mr. Hollander’s Opus routine with side-by-side triple Salchows, but Morozov stepped out the landing on his. The team went on to perform an impressive triple twist and a solid lift with a one hand entry and dismount, however the Grand Prix Finalists were not able to execute a planned throw triple loop. Morozov barely lifted his partner off ice before putting her back.

“This was very unexpected,” said a puzzled Morozov. “We skated this program four to five time clean. Our skates just got stuck.”

When asked about receiving funding from the Ukrainian Federation for training in Germany, Morozov replied: “We keep negotiating, but so far there is still no results. It will end that way, that he (Steuer) will stop working with us.”

Lubov Iliushechkina and Nodari Maisuradze of Russia had to overcome a shaky start when Iliushechkina fell on an underrotated triple toe loop. The European Championships debutants were able to put that mistake behind and perform the rest of the elements and transitions well.

Overall, the 2009 Russian National bronze medalists delivered the best performance of the Senior version of their routine, finally getting enough mileage out of it to avoid rushing into the elements in the second half of the program. However, they had some problems hitting the positions in the spiral sequence and the element received only a level one. The students of Natalia Pavlova scored 52.42 (28.86/24.56) points to finish fifth.

“We came here just to skate and have a nice time,” Iliushechkina told the press. “We don’t expect to win medals. Here the atmosphere is more pleasant than at Nationals. Everything is relaxed, more people in the audience.”

When asked about the difference between Junior and Senior, Iliushechkina replied: “There is not big difference. As our coach used to say, it’s only the name of the competition that changes. But I like to compete in Seniors more, because you can see where you should aim.” “We came to compete against higher-ranking rivals,” added Maisuradze.

The event continues with the Men’s Short and Pairs’ Long Programs.