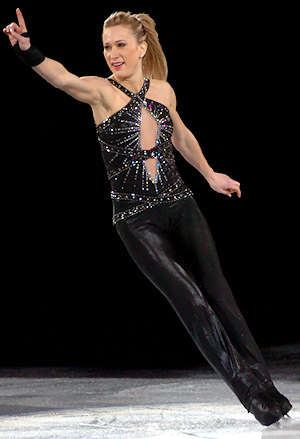 Canada's Joannie Rochette, 23, performs to Die Another Day by Madonna.

Canada’s Joannie Rochette doesn’t look much different from last season, but during the Grand Prix series this year it was immediately evident that something had changed. The skater was moving in a different way, oozing a new confidence and authority on the ice which she hadn’t done before.

“I can’t really explain it,” said the French-Canadian, “but I feel different. I can rely on my training that has been better than ever and I have been working with new choreographers.”

For the first time, Rochette worked with ice dancer Shae-Lynn Bourne and with Lori Nichol. Previously, David Wilson had created her programs.

“The short program, Summertime, was originally an exhibition program that Shae-Lynn choreographed for me,” explained Rochette. “The point was also that I should feel relaxed and comfortable, like in an exhibition.” She chose Concierto de Aranjuez for the free program although she had used a Spanish-themed program, Don Juan by Felix Gray, for the past two seasons.

“At first we also thought that it might be too similar in style,” pointed out Rochette, “but the Concierto de Aranjuez is very classical while last year’s program was more of a Flamenco.”

Rochette views better and more consistent practices as her key to success. “I was able to train better on the ice, a thing that I couldn’t do before because I always was injured during the summer. So my on-ice training is better, plus I also had more hours of training. I could repeat the jumps more often.”

In the past, the 23-year-old only had two hours on the ice for practicing jumps. “Now I have three,” said Rochette. “I have always done a lot off the ice like stretching, but my coach thinks that it’s really the additional time for jumping on the ice that makes a difference. I feel more confident. I had the possibility to train more on the ice before, but my coach and I decided to make a change. Before, we put more emphasis on quality.”

They still do, but they are also looking at the quantity to train the muscle memory to achieve a state where the jumps come automatically. “Skating is a sport and I think you need to repeat elements a lot,” the 2008 Four Continents silver medalist pointed out, “and this is something I haven’t done before. I was always athletic off the ice, very sportive, but for skating you also need to be artistic and I had to change a lot here. I needed more time on the ice to work on the edges and on my upper body that was always stiff. This is better now.”

It was a process and it didn’t happen overnight. Only in end of September did Rochette start to believe that the changes would have a positive effect. “After we did the long program with Lori (Nichol) this summer with all the exits from the jumps, I came home and when I did the first run-through, I think I landed two triples. I thought I’d never be able to do it and that this program is too hard. At the test skate of Skate Canada in September, it still wasn’t very good. But then it improved and I was doing more repetitions, more run-throughs.”

“We’ve also tried to change my mental approach for the competition,” said Rochette, “to take away the stress and to be calm. Of course, there is still stress but being calm and being able to be happy on the ice, even though I’m not a very expressive person to have a smile on my face, is very important this year.”

As it turned out, the changes worked for Rochette. She won her two Grand Prix events in Canada and France. In France, she even beat World Champion Mao Asada. “Mao didn’t skate her best in Paris, nor did I. For me, this victory gives me confidence, but at the same time I know that Mao wasn’t at her best. So I don’t think that I really overtook Mao. It’s more like that I had a good competition and that I managed to stay focused and I stepped through the open door which is something I wouldn’t have done in the past. I would have been too nervous and I would have missed everything!”

At the Grand Prix Final, Rochette was only in sixth place after the short program after doubling the combination and popping the Lutz, but rallied back with the third-best free skate to pull up to fourth overall. “It was a tough week for me,” Rochette recalled. “It was a good learning experience, because I was still able to fight in my long program until the very end.”

This year brought changes not only on, but off the ice for the athlete. Since July, Rochette moved into an apartment with her boyfriend, French-Canadian short track skater Francois-Louis Tremblay, who is a top athlete as well. Tremblay won two Olympic silver medals at the 2006 Olympic Winter Games in Torino and is a three-time World Champion over various distances. The two skaters met during several athlete activities in Canada, but it was in Torino where they got to know each other better.

Rochette feels that their relationship really helped her to develop this season on the ice. “He is someone who is super calm in contrast to me. Before a competition, I am tense at home, while he is the opposite. He helped me to change my way to view a competition. He is a few years older than I am and I think he has more experience in life. He helps me in a lot of things and he can cook!” she laughed.

Rochette is now a woman who knows that she can achieve a lot in her sport. Others have noticed as well. Elizabeth Manley, the 1988 Olympic and World silver medalist, is the last Canadian lady to have medalled at Worlds and the Olympic Games, and feels that now she can pass the torch on to Rochette.

But why did Canada have a lot of success in Men’s, Pairs’, and Ice Dancing but not in the Ladies in the past 20 years?

“I don’t know how to explain,” said Rochette. “First of all, there were less high level female skaters. Maybe it’s because of the mentality of how the girls are training in Canada. Maybe they didn’t have the same strong will to succeed. I think this comes mostly from the head. Then it is maybe due to the way of training. I think there is not enough on-ice training.”

“The boys are naturally more motivated,” continued Rochette. “I don’t know why. Maybe Benoit (Lavoie, President of Skate Canada) or Mike (Michael Slipchuk, Performance Director of Skate Canada) could give a better answer to this question. But I notice at my club that the boys are more competitive among each other. I think the girls want to do well, but they are less competitive. I am very competitive, even with the boys in practice!” she smiled.

When she was younger, Rochette looked up to 1994 Olympic Champion Oksana Baiul. “My first inspiration was Oksana Baiul. I saw her performances from Lillehammer, and they were so beautiful. I fell in love with figure skating because of her. But the one that I admire a lot career-wise is Michelle Kwan, because she was at the top for such a long time and she was a five-time World Champion. This is really a great achievement.”

Now Rochette also finds positive words for her direct competitors, South Korea’s Yu-Na Kim and Japan’s Mao Asada. “I know that Yu-Na and Mao are really strong competitors and technically they are raising the bar and setting the standard for female figure skating. I admire both of them a lot.”

After the Grand Prix Final, Rochette went back home and took an exam in biology, the last one for this semester. She is studying part-time in addition to skating and also began to prepare for the Canadian Championships. It paid off, but the defending champion had problems in the short program on Friday.

Rochette popped her opening double Axel and then underrotated her second jump in a triple flip-triple toeloop combination. She then rushed her on a triple Lutz which resulted in a fall, but earned positive Grades of Execution (GOE) on her spiral sequence, footwork, and spins. She placed second behind Cynthia Phaneuf (55.16 points) with 53.58 points.

Though sad and disappointed with her performance, Rochette shook off the negativity before taking the ice the next day for her long program. She opened with a very good triple Lutz-double toeloop-double loop combination, followed by an equally good triple flip and triple loop. Her routine featured four more clean triples (two in combination), as well as a double Axel-double Axel sequence.

All of Rochette’s jumps received positive GOEs, as did her non-jumping elements, and she earned 131.77 points to place first in the long and overall with 185.35 points – over 33 points more than Phaneuf who scored a total of 151.42 for second place.

For the remainder of the season, the now five-time Canadian champ wants to continue in the way she started. “I don’t set myself a goal in terms of placement,” observed Rochette. “I didn’t do that from the beginning of the season and I won’t do it now. That’s better!”