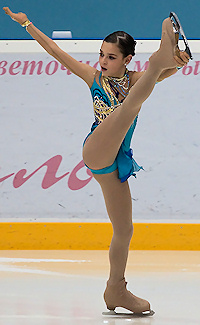 Adelina Sotnikova, a 12-year-old representative of CSKA Moscow Club, led the field in the ladies discipline. The student of Elena Vodorezova-Buyanova landed a nice triple Lutz out of steps, a slightly flawed triple flip-double toe loop combination, and a double Axel immediately after the spiral sequence later in the program.

The skater also excelled in expressing her Eastern-themed music and performed very strong spins and impressive spiral sequence. She earned 54.93 (33.33/21.60) points and turned out to be the best out of much heralded young generation of Russian ladies.

Nina Petushkova delivered a clean, albeit uninspired program to Salvatore Adamo’s Tombe la neige combined with Dark Eyes. The defending silver medalist opened her performance with an impressive triple Lutz, followed by a triple flip-double toe loop combination and a strong double Axel. However, the quality of her non-jumping elements still remains her major handicap. The student of Zhanna Gromova scored 51.94 (29.46/22.48) points for second place.

Aljona Leonova, who is arguably the best Russian lady from the autumn season, placed third with 50.67 (26.45/24.22) points after she put both hands down on double Axel landing. Despite the mistake, the 2008 Junior National silver medalist landed a strong triple flip-double toe loop combination, and a flawed triple Lutz out of steps. While the student of Alla Pyatova displayed a lot of attack, enthusiasm, and charm in her program to Al Andaluz by Manolo Carrasco, her skating was a bit unrefined.

Katarina Gerboldt from St. Petersburg is fourth with 50.13 (26.96/24.77) points. The student of Alexei Mishin fell on an underrotated triple Lutz attempt, but landed a double Axel and a triple flip-double toe loop combination in her routine to music from the Seven Years in Tibet soundtrack. The elegant skater performed all required elements well, but the quality of her spins were not up to the level of her rivals.

The only triple-triple combination of the evening was attempted by 12-year old Elizaveta Tuktamysheva, but unfortunately underrotated the second triple toe loop in combination. Nevertheless, the student of Alexei Mishin performed a solid triple Lutz and double Axel. The skater from Glazov, who debuted at Senior Nationals last season, showed much improved and more mature presentation, and efficiently delivered an upbeat and energetic program. She scored 49.82 (28.73/21.09) points.

Oksana Gozeva stepped out of her opening triple Lutz in combination, and later fell on the triple flip to finish sixth overall. The Muscovite received 48.06 (25.77/23.29) points.

Ekaterina Kozyreva (47.59) popped a Lutz into a single and Maria Artemyeva (46.27), stepped out of both her triple flip and triple Lutz.

Polina Shelepen, another 12-year-old prodigy, fell on her opening triple flip (in what was intended to be a triple flip-triple loop combination) and later put both hands down on a triple Lutz landing. She is currently ninth with 44.81 (25.47/20.34) points.