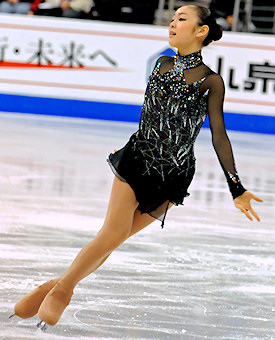 The highly anticipated duel between Korea’s Yu-Na Kim and Japan’s Mao Asada was finally back in action today with the ladies short program.

Canada’s Joannie Rochette had a little something to say about that, but the day belonged to Kim as she annihilated her competition with a short program that would have been competitive in the men’s field this week.

“I am very happy with how I did today because I had a very good performance,” said the Four Continents Champion. “I have been doing very well in training, and I am happy that I could transfer that over to the competition ice.”

Along with her rock-solid jumps, Kim also earned level four for all of her elements except her step sequence, and along the way, broke the record for highest score for a lady in the short program. With a total of 76.12 points, the The athletic 19-year-old eclipsed the former record by almost five points.

“I skated a good short program today, but I don’t know how many more times I can increase my score,” Kim said. “I knew what I scored at Four Continents, so I had in mind what the score could be after I finished. I was shocked at how high the score was.”

The Staples Center was full of Yu-Na Kim fans, and when she finished her program, the roar of the crowd was almost as deafening as it was last night when hometown boy Evan Lysacek won the men’s title.

“The American crowd has been great,” said the leader. “There are so many Koreans here, too, so I feel comfortable skating here.”

Rochette stands between Kim and Asada in second place, and proved that she must now be factored into the rivalry. Skating to Gershwin’s Summertime, Rochette somehow transported the audience to Catfish Row, the fabled location of the opera Porgy and Bess, and somehow steamed up the cold ice in the Staples Center.

“My goal was to reach out to the public, and that was what was missing at the Four Continents,” Rochette admitted. “My elements were not perfect, but I am satisfied with what I did.”

The Canadian champ opened with an easy double axel, and then performed a nice triple lutz-double toe loop with her delicate touch. Rochette also landed a triple flip on her way to a new personal best 67.90 points.

Rochette was rewarded with three level fours, but could only muster a level three on her step sequence and a level two on her closing layback spin. However, she earned the second highest program component scores of the day. Rochette is looking for her first Worlds medal, and leads the reigning World Champion Asada by more than a point.

“I feel confident for the long program, and I am anxious to come back tomorrow. The free program is my strength.”

Asada has struggled with her short program all season long, and after her opening triple flip-triple loop combination, it looked as if she might have turned that around. However on her next move, a planned triple lutz, Asada only managed a double that immediately took her out of the running for the lead.

“I am not satisfied,” said the Grand Prix Final champion. “I missed the lutz, and I can do much better in the second half of my program. I’m pleased that I did the triple flip-triple loop combination, but I didn’t attack the lutz enough. That is disappointing.”

Skating to Debussy’s Claire de Lune, Asada regrouped and finished her program strong, earning a new season’s best 66.06 points for her efforts. Still, the Japanese champion was disappointed in her performance, and has a new game plan for tomorrow’s freeskate.

“I will not do the lutz in the free program,” said the 18 year-old Asada. “Instead, I will try two triple axels.”

In fourth place is Asada’s teammate, Miki Ando, who is on the way back up the ranks after a disappointing season last year. The 2007 World Champion, Ando opened with a credible attempt at a triple lutz-triple loop in which the second jump was downgraded.

“I got nervous, and the triple-triple was downgraded,” Ando said of her performance. “I knew right after the triple-triple (that it would be downgraded), so I was fine. I am just enjoying this experience. The audience is saying good luck in Japanese and in English. It made me happy to hear that, and it gave me power for the skating.”

After the mistake on her combination, Ando gave a stellar performance the rest of the program, and brought life to the music “Memoirs of a Geisha”. Like the top three skaters, Ando earned a season’s best 64.12 points, and finds herself in medal contention.

Ando and teammate Fumie Suguri missed the call for their warm-up group to enter the ice, so both had to rush to prepare for their short program.

“I couldn’t hear the announcement,” Ando said. “I was nervous. I just had to concentrate and give the best possible performance.”

Sitting in fifth place after a dismal performance is Carolina Kostner of Italy, who opened her program by putting her hand down on a triple flip-double toe loop combination. The European silver medalist followed that up with a two-footed triple lutz.

“I’m really not satisfied with my program,” Kostner admitted. “I think it could be much better. I guess this will be one more experience to try and find the right balance for competitions.”

The reigning silver medalist, Kostner skated to Omette Coleman’s “Mujer Sola” and “Canaro en Paris” by Scarpino and Calderella. Kostner never really made a case for a higher finish with this program, but still managed a season’s best 63.18 points to earn a spot in the final warm-up group in the freeskate.

In sixth place is the reigning European Champion Laura Lepisto, who skated a clean program to Karl Jenkins’ “Imagined Oceans. Lepisto skates with less technical content than the leaders, but what she does, she does cleanly and with flair. The Finnish silver medalist’s most difficult jump was a triple loop, but her component scores pushed her to a total of 59.66 points for her short program.

“I’m a little disappointed with the jump combination and my spiral was a little shaky,” said Lepisto. “But I am very pleased with my points. The other elements were good quality, and I got the points that I needed from those elements.”

Right behind Lepisto is American silver medalist Rachael Flatt, who opened her “Breakfast at Tiffany’s” short program by stepping out of a triple flip that was to be her jump combination. Ever the thinker, Flatt tacked on a double toe loop to her next jump, a triple lutz so that she would not lose valuable points.

“I’m disappointed with how my combination came out,” Flatt explained. “Other than that, it was a good program. I knew that I needed to get a combination, so I tacked it on the triple lutz. It wasn’t a triple-triple, but I was still getting points, and that is important now.”

The 2008 Junior World Champion is making her debut at the World Championships, and she skated a fit in well with the seasoned competitors. Her total score of 59.30 points gives her hope of moving up in the freeskate where she has been known to earn high scores.

Finishing in eighth place is Georgia’s Elene Gedevanishvili, who is best known for making the final flight of ladies in the freeskate at the 2006 Olympic Games. Known as a brilliant short program skater, Gedevanishvili did not let herself down today, equaling her highest finish in four tries at the World Championships.

Gedevanishvili opened with a flawed triple lutz, and could only manage a triple toe loop-double toe loop combination before she stepped out of her double axel.

“I hadn’t practiced on this ice as we were always on the practice rink,” said the spunky 19 year-old. “The first triple toe wasn’t so good, so I couldn’t do a triple-triple as planned. But I rotated the axel. For me, it is very important to do well here and to prove something to myself after my disappointing 25th place finish at Europeans.”

Gedevanishvili scored 58.82 points with her “Cabaret” program, but is in a precarious position heading into the freeskate with three skaters behind her trailing the Georgian by less than one point.

One of those skaters is Suguri who is in ninth place in her return to the World Championships after a three-year break. The 28 year old skated a polished program that was marred by a minor error on her triple flip as well as a level one on her layback spin.

“I was a little more nervous than usual today,” Suguri admitted. “We had a little problem in the six-minute warm up, and I didn’t really enjoy it. I just did it. Tomorrow I will enjoy it.”

Suguri received a one point timing deduction, but still earned 58.40 points overall. Had the Japanese silver medalist earned just one level higher on the layback and stayed within the time guidelines, she would have been skating in the final group in the freeskate.

After taking most of the season off to heal from a career-threatening back injury, Switzerland’s Sarah Meier gave a courageous performance, and finished in 10th place. The 2008 European silver medalist is returning to competition after a four-month hiatus, and almost skated a clean program. The only mistake was a step out on her triple flip, but everything else was clean. Meier scored 58.36 points in the short program, and is within striking range of her highest finish (6th) at a World Championship.

“I am relieved it went so well,” admitted the 24 year-old. “It wasn’t perfect, but I had been injured for quite some time. It was only a few days before we left that I decided to come here, and I did my short program really only once before in practice.”

Junior World Champion Alena Leonova is in 11th place in her first World Championships, while the European bronze medalist, Susanna Poykio of Finland is in 12th. Elena Glebova of Estonia is in 13th place, and American champion Alisa Czisney had a horrific short program and sits in 14th place. Canadian silver medalist Cynthia Phaneuf is in 15th.