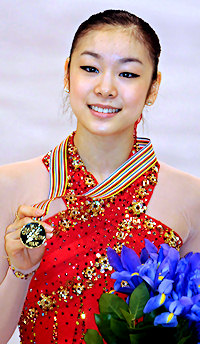 It wasn’t a competition. It was a coming out party, and all of the other skaters were invited as guests. Korea’s Yu Na Kim did not give another skater even a whisper of hope in this competition, and she ran away with the gold medal with a new record score as well as the largest margin of victory by a lady at the World Championships.

“This has been a dream come true for me,” admitted the two-time bronze medalist turned champion. “I have been dreaming of this happening since I was a little girl, and now it came true.”

Kim entered the freeskate with an eight-point cushion over Canada’s Joannie Rochette, and she left the ice with a 16-point lead over the silver medalist. Her competition total of 207.71 points marks the first time any lady has surpassed the 200 point mark since adopting the code of points.

“I never focused on hitting 200 points,” Kim said rather philosophically. “It was more important to take each element at a time, and make sure that I was giving the best performance that I could. I felt that if I could do that, then I might be able to become World Champion. I stayed focused on what I had to do, and won the gold medal.”

Kim opened with her trademark triple flip-triple toe loop, and landed a total of five clean triple jumps in her “Sheherazade” program, but the program was not without mistakes. Kim doubled an intended triple salchow in the middle of her program, and had her final combination spin scored as an invalid element earning the champion zero points.

“We changed the spin after the Four Continents to get a level four,” Kim explained. “It is my fault that I did not have it checked to make sure that it was correct before I came here.”

The ISU rules state that a skater must do three spins in the freeskate; a flying spin, a spin with no change of position, and a combination spin. Kim completed a flying spin and two combination spins, therefore receiving no credit for her final element. Still, it was Kim’s night, and the audience at the Staples Center was clearly on her side from the start.

“There were so many Korean fans in the audience tonight,” Kim said proudly. “But the American fans also supported me. I felt like I was skating at home, and that made me confident to do my best.”

Kim is the first Korean skater to win the World Championships, and now heads into the Olympic season as the clear-cut favorite.

Rochette skated a lovely program to “Concierto de Aranjuez,” earning the silver medal, and becoming the first Canadian lady to stand on the podium since Liz Manley won the same color in 1988. Manley offered her congratulations to the Canadian champion once the results were made official.

“She said that silver is the best color,” Rochette said of the conversation. “She congratulated me, and told me that she knew that I could do it. It was so nice to have her here to share this with because she has been so supportive of me in my career.”

The silver medalist opened with a triple lutz-double toe-double loop, and almost came to a complete standstill on the final jump. However, she recovered to land a nice triple flip before doubling an intended triple loop.

“Even on a night when I wasn’t feeling my best, I was able to get the silver,” Rochette said. “Even if I didn’t do it perfect, this is unbelievable. I was able to deliver.”

Rochette did land a total of five clean triple jumps, including a triple-triple sequence, and earned level four on all of her elements except for the step sequence. Her freeskate total of 123.39 was only good enough for third place, but her personal best total of 191.29 points placed her second overall.

It was Japan’s Miki Ando who actually had the second-best freeskate of the night with her best program since she won her world title back in 2007.

“I am so happy that I was able to skate so good today,” Ando said with a huge grin. “Last year I withdrew from Worlds, so I was disappointed and so sad. I thought that I might stop competing because I was injured and wasn’t having a good time. People tried to get me to come back, and when I started getting better, I wanted to skate again. So I decided that if I would skate, I will do my best, and tonight I did.”

Ando skated to Saint-Saens’ “Symphony Number 3 in C minor” with an almost sophisticated calm, and all the slipped five triple jumps in for good measure. Combined with second highest component scores on the night, Ando was able to leapfrog teammate and outgoing champion Mao Asada to clinch the bronze medal.

Ando summed up her week in just a few words: “This competition was just so awesome for me.”

There were high expectations for a colossal duel between Kim and Asada for the title here, but unfortunately, Asada was never really in the same league as the new champion. After a disappointing short program, Asada entered the freeskate needing to overcome a ten-point deficit.
Opening with a triple axel-double toe loop combination, it appeared as if the Grand Prix Final champion would make for an interesting evening. However, Asada immediately fell on her next element, an underrotated attempt at a second triple axel.

“It is very regretful that I fell,” said the disappointed Asada. “But I did not let it affect the rest of my performance.”

While Asada did manage five triple jumps, she received downgrades on two other jumps and failed to earn level four on three of her elements.

Asada scored 122.03 points in the freeskate, and could only manage 188.09 points overall, more than 19 points less than her rival.

Moving up from seventh with an impressive freeskate was American Rachael Flatt in her debut at the World Championships. The 2008 World Junior champion landed six clean triple jumps in her “Romantic Rhapsody” program, and skated with a youthful exuberance that was embraced by the audience.

“Oh my gosh, it was great,” Flatt said of her experience in the freeskate. “I loved it. Skating in front of a home crowd was great. Because this was my first worlds, I had no pressure coming in, and skating two pretty solid programs was very exciting for my first worlds.”

Like the champion, Flatt made a similar mistake and did not receive credit for her final spin as well. And like Kim, the added points would not have changed Flatt’s placement overall. The US silver medalist did earn level four on three of her other elements, and scored a new personal best 113.11 points in the freeskate. Flatt’s total score of 172.31 points is also a new personal best.

Holding firm in sixth place was the 2009 European Champion, Laura Lepisto from Finland. Skating in the final group for the first time at the World Championships, Lepisto admitted to feeling a bit overwhelmed.

“Today in the practice I was obviously more nervous than usual,” Lepisto admitted. “This is a new experience for me. But this afternoon, I felt pretty good and confident. I did a couple of mistakes that shouldn’t happen.”

Lepisto landed three triple jumps, fell on another, and managed only a double on a fifth attempt. However, the 2008 Finnish champ earned high program component scores to help her maintain her placement after the short program. Lepisto’s freeskate total of 110.41 points is slightly below her personal best, but her competition total of 170.07 eclipses her old personal best by almost three points.

Finishing in 7th place was the 2009 World Junior Champion, Alena Leonova from Russia. The 17 year-old catapulted up the rankings after an 11th place finish in the short program, and couldn’t contain her excitement at the end of her five –triple jump program.

“I had one error, but that doesn’t matter,” Leonova said with a smile. “It’s awesome that I made the top ten at Worlds. I was in a good mood today, and went out there to skate well.”

The Russian decimated her previous personal bests in every phase of the competition, earning 110.73 points for her freeskate and a total of 168.91 points overall.

“I had a long blank period of three years,” Suguri said of the time between her trips to the World Championships. “I missed the jumps, but I skated as well as I have been skating in practice, so I am satisfied with that.”

“Next season I will do a triple-triple,” Suguri said confidently. “I think that it will be necessary at a high level of competition like the Olympics. That will definitely make a big difference in points.”

Finishing in ninth place with another courageous performance was Swiss skater Sarah Meier. The 24 year-old barely made the trip to Los Angeles, waiting until the last minute to decide if she was healthy enough to compete.

“This morning I had so much pain, and I was thinking about withdrawing,” said the 2008 European silver medalist. “I hadn’t skated my free program since November, even in practice, so I thought after my first jump that I would already run out of energy. I don’t know how I survived until the end.”

Meier landed three triple jumps along with two double axels, and scored 105.01 points in the freeskate. Even with a sore back, Meier earned 163.37 points overall, as well as two spots for Switzerland in next year’s Olympic Games.

Georgia’s Elene Gedevanishvili finished in tenth place with a peppy performance that included a triple-triple combination. After a disappointing European Championships, Gedevanishvili felt vindicated with her placement here.

“My goal here today was to make over 100 points, and I did that so I am happy,” said Gedevanishvili. “It was very hard for me to get myself together after the European Championships. I wanted to prove to myself that I could do it. Now I know I can, and I will work even harder.”

Moving up three spots to 11th place after an eighth place finish in the freeskate was American champion Alissa Czisney. Italy’s Carolina Kostner had the most disastrous performance of the week, failing to land a single triple jump after winning the silver medal last season. The European silver medalist placed 15th in the freeskate, and had to settle for 12th place overall.