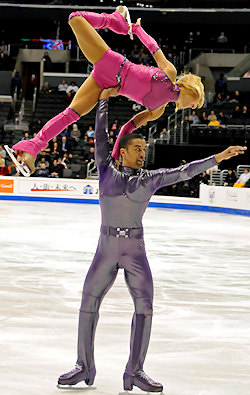 Aljona Savchenko and Robin Szolkowy of Germany placed first in the Short Program with their routine to music from the Lost in Space soundtrack.

It was a great night of pairs skating as twenty-five teams from all corners of the world competed in the short program at the Staples Center in Los Angeles. The top teams competed so well that even a minor bobble relegated some of the medals favorites to the penultimate group for tomorrow’s free skate.

Atop the leader board as expected are the reigning champions, Aljona Savchenko and Robin Szolkowy of Germany, who skated an all-out performance to music from the Lost in Space soundtrack. The duo landed each element cleanly in their program, and separated themselves from the pack with the highest technical scores of the evening. With a new personal best of 72.30 points, the European Champions have an almost four-point cushion heading into the free skate.

“We wanted to build up to this competition and show everyone that we deserve our placements,” Savchenko explained. “This performance was a great one for us, and we are happy and relieved to be in first place.”

Skating in non-traditional pink and purple costumes, Savchenko (25) and Szolkowy (29) entertained the audience from start to finish with an interesting concept that the audience appreciated. The leaders earned level four on all of their elements, save the triple twist lift (level 2), but admitted their lead was not easy to come by.

“It was a very hard night for us,” admitted Szolkowy. “After a long season, I think that it may have finally caught up with us. Even though my head was in the skating, my legs felt very heavy, and it was difficult to breathe. So, we are very happy with our skate, and equally happy with the result.”

Trailing the Germans is the Russian team of Yuko Kavaguti and Alexander Smirnov, who skated an equally impressive program to Camille Saint-Saëns’ The Swan. The European silver medalists equaled the leaders in terms of levels and elements completed, but could not keep pace with the German’s GOEs.

Kavaguti (27) and Smirnov (24) earned 68.94 points for their program, and surprised many with their difficulty and execution. Their lift, in fact, had so many variations that it could have been scored at a level six had the rules allowed. However, it was the smoothness and sense of calm throughout the program that propelled this duo to second place.

“This program was very good,” said Kavaguti. “We are happy with everything that we did, and we hope that we can carry this over to the free skate tomorrow.”

In third are China’s Dan Zhang and Hao Zhang, who also had a first-rate performance that probably would have won the short program in many other seasons. Zhang and Zhang were well rewarded for their technical accomplishments, including their trademark triple twist lift, but missed a level on their spiral sequence and had to settle for a level three.

“We are very pleased,” Hao Zhang (24) said of his team’s short program performance. “Those were the best triples (Salchows) that we did all season, and everything else was fine.”

Competing with a knee injury for most of the season, Dan Zhang (23) looked strong and skated up to the level of her partner. However, the reigning silver medalists were not able to keep up with the leaders in terms of program components. This was probably due mostly as a result of some revisions made to the transitions and choreography in order to allow the team to compete the elements with relative ease. Still, Zhang and Zhang earned 67.42 points that keeps them in contention for the title heading into the free skate.

“The injury is still healing,” Dan Zhang later responded when asked. “I continue to receive therapy on the knee, but it didn’t affect how we performed tonight. It was a good start to the competition for us, and we are very prepared to skate a great free program.”

Less than a point behind Zhang and Zhang is the Russian tandem of Maria Mukhortova and Maxim Trankov of Russia. This team has perhaps the most elegant and complete short program this season to Nobody Home by Pink Floyd. The European bronze medalists earned levels equal to the Chinese on almost every element, but their base value on their elements was one point less. Earning a neutral GOE (nothing added or subtracted from their score) for their triple twist lift made the difference in placements, demonstrating just how tight this competition was at the top.

“All season we have skated a good short program, and this was clean and very good for this moment,” Trankov said. “In order to compete with the top pair skaters like the Germans and the Chinese couples, it was a big step ahead.”

With a score of 66.88 points, Mukhortova (23) and Trankov (25) are definitely within spitting distance of the podium, but will have to remain composed heading into the free skate which has been difficult for them all season.

“In training, we always skate good, but this season something is happening in our free skate,” said Trankov. “We always make errors. We want to skate clean, and we hope to do that in our last competition of the season.”

In fifth place with an equally stellar short program are former World Champions, Qing Pang and Jian Tong of China with 65.18 points. The Four Continents Champions opened with a small error on the triple toe jumps, and only achieved a level three on both their spiral sequence and flying combination spin.

“Today I felt a little tired,” admitted Tong. “I caught a cold before coming here, so I didn’t feel great in practices. I felt a little weak for the jumps. But we’ve got lots of experience, and we can deal with that.”

Even so, Pang (29) and Tong (29) performed their “Midnight Blues” program with a maturity that shows why this duo is always near the top of the leader board. And with moves like their high-flying split twist and throw triple loop, this team will pose a threat for a charge to the podium in the free skate.

“We are pleased with this performance,” Pang said. “We skated up to our level like we do in practice. We still feel confident (for the free skate), and that we will do much better than today.”

Standing in sixth place are Tatiana Volosozhar and Stanislav Morozov of the Ukraine. After opening their routine with a turn out by Volosozhar on the triple toes, the Grand Prix Finalists completed the highest scoring element of the competition – a triple twist lift that earned the team a whopping 7.26 points. Later in the program, Volosozhar two-footed the landing on the throw triple loop, costing precious points that kept the perennial also-rans out of the top group once again.

“Today there were a few smaller errors,” Volosozhar admitted disappointedly. “I wasn’t feeling so great. Maybe because of the time change. Hopefully we will skate better tomorrow.”

Nevertheless, the Ukrainians are within striking distance of the podium with a new personal best of 64.10 points. A medal here would be a triumph for the team that has earned a fourth place finish at the Grand Prix Final and the European Championships this season.

“We changed coaches this summer so that we could get better,” Morozov explained. “Our coach works with us on every element and the whole package. We changed our whole practice and this has really helped us.”

In a disappointing seventh place are last year’s bronze medalists, Jessica Dubé and Bryce Davison of Canada. Skating to music by Coldplay, the Canadian Champions took themselves out of contention on the first two elements. On the opening triple Salchows, Dubé stepped out of the landing, and then the team immediately had a sloppy catch on their triple twist lift.

“We had a great practice this morning, and the warm up was good,” said a dazed Dubé. “We didn’t have that much stress. We felt really comfortable heading into the short program.”

With 61.80 points, Dubé and Davison trail the leaders by a seemingly insurmountable margin, and will have to put this performance behind them in order to fight to keep three spots for Canadian pairs for next year’s Olympic season.

“It wasn’t by any means perfect,” Davison said rather confidently, “but it was probably just above our average for competitions in the short this year. There are still a lot of positive things about our skate, like the very nice throw. Now it’s time to learn from this, and look forward to the next day (of competition).”

Dubé and Davison’s teammates Meagan Duhamel and Craig Buntin are in eighth place after a clean performance of their “4 Lamentations” program. The only mistake came on the pairs combination spin for which the team only received a level three from the technical specialist.

“I knew that I was a little short in changing the edge (of the spin),” Buntin later confessed. “I couldn’t see behind me and the boards were there.”

“We’re not such a new team anymore, and we are really starting to feel confident,” Buntin said of the team’s beautiful performance.

Duhamel added, “Every time we compete, I think that we are doing our short better and better. It was good to have (training mates Mylène Brodeur and John Mattatall) competing right before us and skate so well. It was comforting to hear their music, and then step on the ice. It felt like home.”

Duhamel and Buntin are less than a point behind teammates Dubé and Davison with 61.28 points.

U.S. champions Keauna McLaughlin and Rockne Brubaker had a lackluster debut in their first World Championships, finishing in a disappointing ninth with a rocky performance.

“Obviously we had some mistakes, and we missed some levels which hurt us,” Brubaker shared. “It’s an experience, and it’s our first Worlds. Overall, I think that we felt really comfortable out there. It had nothing to do with nerves. It’s kind of just the way it goes, and you take it as it comes.”

McLaughlin and Brubaker started off well, nailing their first two elements, but disaster struck as McLaughlin fell on her triple Salchow. The duo then struggled with an uncharacteristically low and tight triple twist lift that earned a negative GOE, and then McLaughlin sealed the team’s fate by touching her hand down on the throw triple loop.

“It’s frustrating because I wanted to land that jump,” said a visibly shaken McLaughlin. “It’s one of those ‘argh’ moments because this is the first one that I have missed all season.”

McLaughlin and Brubaker have a total of 53.62 points after the short program, far below their personal best, and have little hope of moving up in the free skate. Their teammates, Caydee Denney and Jeremy Barrett had a much better performance than the American champions, but sit in 10th due to their low program component scores.

“We haven’t really had much time to work on the components,” Barrett explained. “We have been together less than a year, so for us it was all about getting the elements so that we could compete. After the competition, we know what we have to work on, and we will spend a lot of time working on those component scores.”

Denney added, “It will be exciting when we finish this competition because we will no longer be that “new team”. We will have time to properly prepare for next season, and it will be great to see what we can do once we have time to perfect everything.”