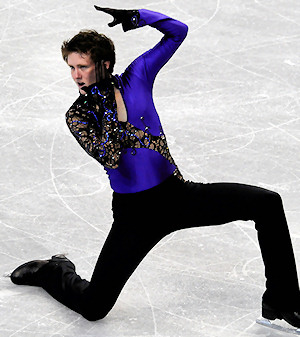 The 2008-09 season was a good one for USA’s Jeremy Abbott, who scored his first major national and international wins this year.

The talented 23-year-old won an ISU Grand Prix event for the first time when he took gold at the Cup of China to start his season. With a fourth place at the Cup of Russia, he qualified for the ISU Grand Prix Final in Goyang, Korea – another career first – where he took the title and earned new personal best scores in all phases of the competition.

“My goal was just to make the Final and skate my best,” said Abbott. “I had no expectations for the outcome. I felt horribly nervous for the free, but I had a good warm up. I was able to contain myself and keep composed and I felt that was more exciting than winning.”

“I’ve been working with a sports psychologist, Gayle Davis, and she’s given me techniques to keep myself focused and controlled,” he continued.

His dream season continued as Abbott won his first gold medal at the senior level at the 2009 U. S. Figure Skating Championships after finishing fourth the last two years. “I felt a lot of pressure after the Grand Prix Final to win the title, so it was a big weight off of my shoulders when I won.”

In his last tune up before Worlds, Abbott placed fifth for a second straight year at the 2009 Four Continents Championships in Vancouver, British Columbia. “I used Four Continents as a platform for Worlds,” he said. “Nationals was physically and emotionally draining, and having such a short time period between Nationals and Four Continents was really difficult.”

At Worlds, Abbott again finished 11th, the same as in 2008. “I didn’t expect myself to be in this position,” he said. “I gave my full heart. I really didn’t feel that the mistakes that I made were great enough to justify my scores.”

In the short, Abbott touched down at the end of his opening triple flip-triple toe and stepped out of a triple Axel, which was downgraded by the judging panel. However, he recovered with a great triple Lutz and earned positive Grades of Execution on all of his non-jumping elements.

In the long, Abbott struggled again with his Axels, but landed a good triple Lutz, triple flip, triple Salchow, and triple loop.

This season, Abbott decided not to focus much on the quad in order to improve his artistry, choreography, and transitions.

“I’m confident in my ability to do the quad and I feel comfortable with it,” Abbott said. “I’ve been able to do a quad Salchow. In fact, I did it first but I prefer the quad toe. I may do the quad again in the short program like I did last year. We’ll evaluate during the summer to see what I need for next season.”

“I’ve done a quad-triple-triple and even tried a quad-quad for fun,” he added. “I landed the second quad, but it was about three and a half.”

Tom Zakrajsek and Becky Calvin coach Abbott, who trains in Colorado Springs, Colorado. He usually trains for 2-3 hours a day, six days a week. “I don’t change my schedule in the summer except to increase my off ice work a little bit,” he said.

“I’ve changed a lot of little things in my day to day routine,” Abbott said. “How I think about training matters a lot. I’ve changed the way I use my time and I’ve added an off ice dance class to improve my presentation.”

“Working with Jeremy is like being a master painter and painting a masterpiece,” Zakrajsek said. “It is a challenge because we work on so much detail in all of his movements. I think when people watch his skating they can see that.”

“I’ve tried to focus on the consistency of the whole program,” said Abbott. “I want to produce a solid reliable program each time I compete.”

Both of Abbott’s programs were new for the 2008-09 season. Catarina Lindgren choreographed his short program to Adagio by Tomaso Albinoni.

“Before Worlds last year, I was working on a kind of Greek god imagery with Tom,” Abbott stated. “Catarina wanted to use the same imagery and it kind of went from there. She even designed the costume for me. Then Tania Bass agreed to sponsor me and did the costume for free.”

Tom Dickson choreographed Abbott’s free skate using Eight Seasons by Gidon Kremer and Kremerata Baltica. “Tom brought that music to me,” Abbott said. “I wanted to play with movements, and that music fit me very well. I felt very comfortable with it.”

Abbott used Treat by Santana for his show program. “Since Nationals was in Cleveland, we wanted something to go along with the Rock and Roll Hall of Fame,” he stated.

“Working with Tom and Catarina gets the most out of you,” Abbott said. “They work naturally to put out the best programs. I don’t even have to think about it because they do the fine tuning and polishing and tweaking.”

“I’ll change at least one of my programs for next season, Abbott said, “but I haven’t decided on anything yet.”

Off ice, Abbott said, “I like very low stress mindless things. I hang out with my friends. I read books that can draw me in – fiction, humor and mysteries. I love to rock climb, both indoors and outdoors.

Abbott has put off further studies until after the 2010 Olympics. “I admire kids who can do both school and skating,” he said, “but I have to put myself completely into one thing.”

“I’d like to do a few shows this summer, but not tour,” he noted. “I need time to develop my Olympic programs.”

Before the shows, however, Abbott will be taking a vacation in Spain.