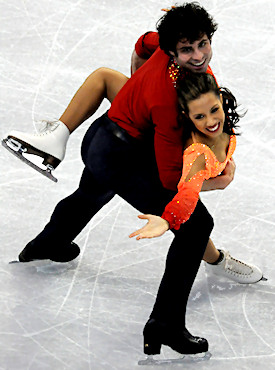 Although the couple has won each time they competed at U.S. Nationals, McLaughlin has never been healthy there.

“The first year I had the stomach flu, last year I had a fever, and this year I had bronchitis,” McLaughlin said. “I don’t know if it’s the stress or the long season, but I was sick for a week before Nationals and had a hard time getting through it.”

Meanwhile, Brubaker was suffering from two painful torn muscles in his lower abdomen, which he first noticed in the fall of 2008.

Dr. John Reasoner, the medical director of performance services at the United States Olympic Committee in Colorado Springs, CO, said Brubaker “had the ability to work though it during competitions, which is pretty amazing because it can be a very annoying and debilitating injury for individuals who perform repeated lifting.”

“Sometimes there were days I had to tone it down in training or couldn’t do as much because of it, but it didn”t affect my competition,” Brubaker claimed.

The injuries were serious enough that Brubaker had surgery on April 3 to repair the damage and will not be able to be back on the ice until May.

“We wanted to have the surgery right after Worlds so I could heal since next season is so important,” Brubaker said.

Earlier in the season, the 2007 World Junior Champions won a silver medal at Skate America and a bronze at Skate Canada, but missed qualifying for the ISU Grand Prix Final.

“We’ve done all right,” Brubaker said. “We’ve almost always been on the podium as seniors. Sometimes we’ve not had the best skates, but we’ve been consistent.”

McLaughlin and Brubaker placed fifth at the ISU Four Continents Championships, which were held in the figure skating venue for the 2010 Olympic Games in Vancouver. They placed 11th at Worlds.

Now ages 16 and 22 respectively, the skaters have been working together since May 2006.

Dalilah Sappenfield and McLaughlin’s mother, Lei Ina, coach the skaters, who train in Colorado Springs, Colorado. They work for 2-3 hours a day, six days a week on ice with another hour of warm-ups beforehand. Brubaker hits the gym three times a week for cardio and agility work, while McLaughlin goes twice a week. She also does hot yoga in a sauna.

Brubaker also cycles in the off-season and plays pickup hockey in the spring, summer and fall.

“We do a run-through every day of each program,” Brubaker stated. “Then we do run-throughs of a different sections.”

“We do really intense stuff two weeks before a competition, then taper off the week before,” McLaughlin added.

In the short program, the skaters perform side-by-side triple Salchows, a throw triple loop and the triple Lutz twist lift.

McLaughlin loves their triple Lutz twist lift, which is also in their free program, because she loves being thrown into the air.

They also do level four lifts, Brubaker’s favorite pairs element. “We do a lot of special lifts with speed that kind of stand out for us,” Brubaker said. That includes a Group 5 toe lasso lift and group 5 Axel lasso lift in their long program.

“Our big focus this year was working on consistency and improving our program component score,” Brubaker said. “We need to make up some big ground on that.”

“I think we’ve improved quite a bit, but it’s a work in progress,” McLaughlin said.

Lee Ann Miller choreographed the couple’s 2008-09 programs, both of which were new this year. It was the duo’s first year using Miller as a choreographer.

“We talked about using a few different choreographers,” Brubaker said. “We liked the programs Lee Ann had done for professional shows and we looked at some of the programs she had done for other teams. Since she had not worked with many amateur skaters recently, we thought that she would give us a new look.”

“Lee Ann was really into it,” he continued. “She took us under her wing and took us to another level.”

“She helped us with our relationship to one another on the ice,” McLaughlin added. “The programs really emphasize our power on the ice. We’ve added a lot of complicated transitions into elements and other moves that bring us to the next level so we can compete with the Germans, the Russians and the Chinese. Both of our programs are go, go, go. There’s always something going.”

“Lee Ann had a lot of creative ideas for lifts and other elements that we found out were illegal so that was frustrating for her,” Brubaker continued. “Getting into the correct positions to get the highest levels was a challenge.”

For the short program, they are using Malaguena by Ernesto Lecuona. “I always wanted to do a Spanish short program,” McLaughlin said.

“We knew it was something we wanted to try,” Brubaker added. “Lee Ann said she had the music for a long time and was waiting for the right skaters to use it.”

Their free skate music includes three selections from the West Side Story soundtrack.

“We were all sitting around with Lee Ann, throwing out ideas,” Brubaker recalled. “We wanted to tell a story but we didn’t have a story to tell. Lee Ann said we ought to do a West Side Story-ish story and I had this great piece I wanted to try.”

“We wanted to do the story of young love, not the usual finger snapping thing everybody does,” McLaughlin said.

“We didn’t want to have the rumble and use Somewhere and America and be just another copy,” Brubaker added. “We liked the part where they’re all dancing in the gym and everything is happening at once. We pulled the mambo section first and then added Tonight and Maria.”

“It’s fast and furious and very energetic,” McLaughlin said. “It’s like the hardest section ever.”

For exhibitions, the couple uses Something by the Beatles, choreographed by Lei Ina McLaughlin. “It’s one of my favorite songs,” Keauna said. “I listen to a lot of Beatles music.”

The skaters are already thinking about next year’s music. “I want to skate to Twilight,” McLaughlin said. “I’ve seen the movie four times and read all the books.”

Brubaker is a senior at the University of Colorado majoring in business administration and sports marketing. He’s considering a job as a firefighter or in law enforcement but has the business degree as a backup.

McLaughlin is in tenth grade in high school. She enjoys writing and design and is considering jobs in those fields. “I’m always writing in my journal and I’m constantly sketching and designing,” she said. “I design my leotards and some skating clothes. Lee Ann and I help design our costumes.”