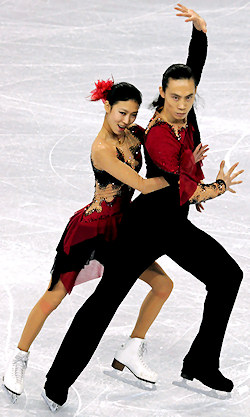 Chinese pair skaters Qing Pang and Jian Tong have had a very successful career thus far. They were the 2006 World Champions, they are the current and four-time Four Continents Champions, and have medaled at 20 out of 29 Grand Prix events (including the Finals) since 1999.

This year at Worlds, however, they didn’t skate their to their potential as Tong was recovering from a cold with fever. They came in fourth – one place higher than last year. “Like last year, a jump was downgraded and we had a single Axel,” said Tong with a sigh, “but I think considering the circumstances, we did quite well.”

Now the team is looking forward to the upcoming, Olympic year, which probably will be, according to their plans right now, their last competitive season.

For the 2008-09 season, the couple used The Midnight Blues by Gary Moore for the short program and Tango by Gotan Project, Concierto de Aranjuez, and Tango de Roxanne from the Moulin Rouge soundtrack for their expressive free program.

The short program was choreographed by Nikolai Morozov, while the long was done by Sarah Kawahara. “Nikolai (Morozov) suggested the music for the short program, but to use tango for the long program was my idea,” revealed Tong. “Sarah (Kawahara) then chose the suitable music. We’ve skated to Tango in 2000 before, but never again after that. Our goal for this year was to show two different styles – one slower and one more powerful program.”

Working with Western choreographers was not a new experience for this team, but still a good one. “They are very different,” observed Tong. “Nikolai puts more emphasis on the elements, while Sarah has an idea, first looks for the music, and then constructs the program. We’ve worked with Nikolai for three seasons, therefore we know his style. We did a program with Sarah once about three years ago.”

For the new season, the Chinese have yet to pick their choreographers, however, their preferred choice would be Morozov, Kawahara, or David Wilson and Shae-Lynn Bourne. “The next season is the Olympic season, and more people will do new programs. I don’t know yet the schedule of the choreographers,” said Tong. “We definitely want to go to the USA or Canada, and we are planning to do two new programs.”

Pang and Tong’s career have been very long. They have competed in 11 consecutive World Championships since 1999, and in two Olympic Winter Games, finishing ninth in 2002 and fourth in 2006.

“At first it was the thought of winning a medal at the Olympic Games,” Tong said about their motivation to compete for such a long time. “Now it is more about enjoying skating and performing. We hope that more and more spectators and fans appreciate us and our style. Obviously, we also have the dream to win a medal in 2010 (at the Olympic Games).”

The two 29-year-olds know that they need to improve the consistency on their side-by-side jumps in order to stay in contention for the podium in Vancouver. Over the last summer, Pang especially worked on her jumping technique and indeed, her consistency has improved this season overall.

“I’ve worked on my strength and balance,” Pang volunteered. “I put on two kilograms of weight in my leg and stomach muscles to become stronger.” She laughed when told that her thinness made people often wonder if she has health problems. “It’s good that I’m thin! No, I don’t have any health problems. I only have injury problems. My knees cause problems since last summer.”

Tong agreed. “When we train very hard, injuries happen. I still hope that we will be able to train well for next year. We need to find the right balance between training and rest.”

The main rivals of Pang and Tong are not only World Champions Aljona Savchenko and Robin Szolkowy of Germany, but the two Russian teams of Yuko Kavaguti and Alexander Smirnov and Maria Mukhortova and Maxim Trankov, Ukrainians Tatiana Volosozhar and Stanislav Morozov, Canadians Jessica Dubé and Bryce Davison, and their teammates Dan Zhang and Hao Zhang.

The rivalry is even stronger as both Chinese top teams are training together under head coach Bin Yao. “Yes, there is a rivalry,” confirmed Tong. “We are on the same ice and we have the same head coach.” However, each team has an assistant coach that focuses on them – Wei Liu works with Zhang and Zhang while Xiaofei Chen coaches Pang and Tong. “Sometimes we have different practice schedules,” explained Tong. “For example Qing has to do more for her leg muscles. Right now, our practice plan on the ice is the same, but off the ice, it is different.”

The competition between the two Chinese teams is pushing them both to become stronger and better, however, sometimes it seems that the Chinese Federation is pushing more for Zhang and Zhang.

He knows what he is talking about. Tong will turn 30 this summer, while his partner will turn 30 in December.

By the time of the Olympic Games in Sochi, Pang and Tong don’t want to be competing anymore. In fact, they are looking to retire from competition after the 2009-10 Olympic season.

“We probably won’t compete then, but we want to perform in shows. Maybe we’ll go to university to study languages,” said Tong, who actually speaks English quite well. “Maybe we’ll try to organize a skating tour in China. Skating has become popular in China, but there aren’t any shows. Therefore we have to do something to develop shows. I think this is something interesting. On the other hand, nobody has money this year! We need more sponsors!”

His partner also would like to take part in shows after her competitive career. “I also can see myself working as a coach or doing something different, but I haven’t really given it too much thought,” Pang explained.

After the Olympic year, the team will also have more time for their private life. This is something they are not ready to discuss with the media right now. “Now it is not yet the time to speak in public about it,” answered Tong, when asked about their relationship off the ice. “We’ll have more time to think about it once we finish our competitive career. Maybe we’re doing shows together in 2011 in China. If we do something like this together, it will be better. One alone doesn’t have so much power. I hope, she’ll be with me!”

Pang revealed that they get along very well. “We used to quarrel a lot before, but now it happens rarely,” she added.

Pair skating has become popular in China, especially thanks to three-time World Champions and two-time Olympic bronze medallists Xue Shen and Hongbo Zhao. “The Chinese pairs are among the best in the world, but the other disciplines are weaker,” underlined Tong. “The Chinese media is only interested in good results, hence interested in pair skating.”

Nowadays Pang and Tong are recognized on the streets by fans. “It happens more and more,” said Pang. “It is actually quite nice, because it helps us to promote figure skating in China. We hope to increase the popularity of skating.”

Overall, this season went well for Pang and Tong, who are now already focusing on next year. “Our final goal are the Olympic Games,” Tong announced. “All the other competitions aren’t so important in comparison, but they give us confidence.”

The Chinese believe that Savchenko and Szolkowy are the top contenders for the Olympic gold in Vancouver, but they are ready to challenge them. “We’ll have to train more and to progress more,” stated Tong. “We’ll need a little more time to polish our programs. Then we also can hope for a medal at the Olympics.”

This dream could very well come true next year.