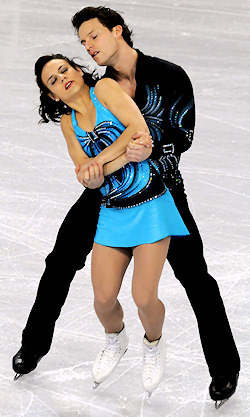 Meagan Duhamel, 23, and Craig Buntin, 28, have risen close to the top in pairs in their two years together.

The couple won the bronze medal at Canadians in 2008 and improved to silver in 2009, actually winning the short program over 2008 world bronze medalists Jessica Dube and Bryce Davison.

Duhamel and Buntin were sixth at Worlds in 2008 and eighth in 2009. The couple placed fourth at this year’s Four Continents Championships in Vancouver.

They also won a bronze medal at Trophée Eric Bompard in 2008.

“The season has gone well for us,” Buntin said. “We’re in the same league with the top pairs in the world and in striking distance of the podium.”

“If we skate our best, we have a shot,” Duhamel added. “If we see someone skating well, we want to skate better.”

“Our biggest asset is our passion and our drive and desire,” underlined Buntin. “I think that comes out in our skating. We’re a young team and we’re developing fast.”

“We want to be on the podium in Vancouver,” the 28-year-old continued. “That’s my home town. If we haven’t peaked as a team, we’ll probably continue after that. We definitely want to make the Worlds podium. After we finish, tours and shows would be fun.”

Duhamel had to give up a promising career in ladies to focus on pairs. “I miss training, but not competing in singles,” she said. “I couldn’t do in competition what I could do in practice. I haven’t lost any of my jumps. I still do them all for fun.”

The couple teamed up in June 2007 after Buntin’s former partner Valerie Marcoux retired. “We’ve rearranged our lives to make the partnership work,” Duhamel said. “We’re both competitive people. We have a vision of where we want to go and what we have to do to get there.”

“We both want to succeed badly,” Buntin added. “We butt heads often, but Richard (Gauthier) sorts it out. We’ve set our goals very high and we want to be better than good. We want to be great.”

Duhamel had trained in Barrie, Ontario for many years before moving to Montreal. “I was ready for a change,” she said. “The whole atmosphere is different here. In Barrie, it’s a big business with so many people there. Here it’s more relaxed. It was the right time for me to move.”

The duo are coached by a team headed by Richard Gauthier, Manon Perron, and Bruno Marcotte. “Richard makes all the decisions,” Duhamel sad. “We work with Bruno every day on lifts and twists and Manon on jumps.”

“We work on pairs for about three hours a day, five days a week,” Duhamel shared. “Then we do another session by ourselves on jumps.”

Julie Marcotte choreographed the couple’s 2008-09 programs, both of which were new this year.

Their short program music was 4 Lamentations by a local Montreal artist.

“We looked forever for music,” Buntin said. “After a few months, Julie said we should get a story and concept and start with that. We decided to tell the story of us and how we came together and our performances.”

“Then we heard this piece of music that Julie had on her iPod,” Duhamel continued. “A girl from Montreal did it. We actually emailed her and told her we were going to skate to it.”

For the long program, the couple used Tosca by Giacomo Puccini. “Our strategy was to find a piece of music that builds and builds to show our strengths,” Buntin said.

For shows, Duhamel and Buntin skate to The Story by Brandi Carlile. “One of my friends saw it and loved it,” Duhamel said. “He told me it would be good for us.”

The couple has succeeded despite a run of injuries. The most debilitating was when Buntin injured his shoulder in the gala following Canadian Nationals in 2008. “It was just a timing thing,” he explained. “The lift went up just a little bit off and I had some previous problems with the shoulder. I couldn’t lift my arm and had to get an MRI to see what I’d done.”

By the time the injury was diagnosed, it was too late to fix before Worlds. “We had no world ranking points, so we knew we wouldn’t get any Grand Prixs if we pulled out so we did what we had to do,” stated Buntin. “We knew we had to get those points if it was physically possible.”

“I had to do a lot of off ice work to strengthen my shoulder and lats,” he noted. “The strength came back gradually, but we didn’t do any lifts until the first practice at Worlds.”

“We were just hoping to do the long,” Duhamel added. “I was surprised that we were able to place sixth.”

“Worlds damaged it much worse,” Buntin continued. “I tore the rotator cuff, the labrum and three tendons. As soon as we got back to Montreal in April, I had the surgery. It took seven or eight months to recover.”

“We didn’t do lifts and full runthroughs until two weeks before Skate America,” Buntin said. “We spent a lot of time working on other things. I learned how to do a spread eagle so now we can do a spread eagle into a lift. We did a death spiral using my other hand. So we’ve slowly build our repertoire up.”

“I can land it eleven times out of ten,” Duhamel stated. “If I fall it’s a big surprise.”

They also use the throw triple Lutz in their short program along with side-by-side triple toe loops and a double flip twist lift.

“She landed it within the first ten minutes of the tryout,” Buntin added. “She’s an incredible thrower.”

“I like throws the best,” Duhamel stated. “I landed the first throw I ever tried and it’s like a comfort zone for me. I like to go high and I want to go higher than the Chinese.”

“For the most part, all of the moves we have are solid,” Duhamel continued. “We don’t have any major weaknesses, but we’re working on increasing our speed and finesse and the overall quality of our elements.”

“We’ve also been working on a triple toe-hop-triple toe and triple Salchows as side-by-side jumps, as well as a throw triple twist,” she added.

Buntin is taking continuing education courses through Concordia University after completing a degree in general business studies. “I want to be able to do something with my future,” he said. “Coaching’s great, but I’ll need something else.” He works about ten hours a week now in coaching.

Duhamel is in her second year of university studies, taking online courses in psychology. “I want to be a teacher in elementary school,” she said. She works as a nanny for two children about five-six hours a day, five days a week, to help cover her training costs.

Off ice she enjoys baking, reading, playing board games and cards. He enjoys scuba diving, unicycling, and swing dancing.