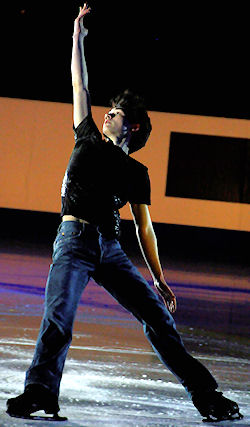 Curran Oi should have a soft spot in his heart for Sofia, Bulgaria. His two biggest international competitions have both been in the Balkan region. In 2006, Oi made his first splash on the international scene by placing fifth at the 2006-07 ISU Junior Grand Prix Final in Sofia. Then he returned in 2009 to finish fifth at the World Junior Figure Skating Championships.

“It was kind of weird skating in the final group,” Oi said, “but it was a good learning experience. I prepared well and was in a good place in my head. I’m happy about my short and I landed both of my planned triple Axels, but it was tough being so close to third.”

The 18-year-old finished sixth in senior men at U. S. Nationals in 2009 after placing sixth in juniors the previous season. “My goal was to be in the top ten at Nationals and go to Junior Worlds so I was happy with that,” Oi stated.

Oi, who first became interested in skating when he watched it on television, has been on the ice since he was six. Within five years, he had a double Axel and was working on triple jumps, all of which he could do by the age of 14, with the exception of the triple Axel. Last year he added the triple Axel to his arsenal.

“My triple Axel has become pretty good now,” Oi said. “At the beginning of the year it was like a coin flip whether I would land it or not but now it’s fairly consistent. I do a lot of triple Axels in practice.”

“I’m working on the quad toe loop now,” he said. “I landed some in practice a few weeks before Junior Worlds and plan to work on it more in the summer.”

“I really like jumping,” he added, “but now I have to work really hard on the performance side of my skating because it’s the least developed. A lot of my coaches’ time is focused on performance rather than technique. I’m fairly happy with my technical side.”

Mark Mitchell and Peter Johansson coach Oi, who trains at the Skating Club of Boston, near his hometown of Wellesley in Massachusetts.

Jamie Isley choreographed both of Oi’s 2008-09 programs. Oi continued to use music from the soundtrack of the Broadway musical Phantom of the Opera for his short program, the same as he did in 2007-08.

“Jamie came up with the idea,” Oi stated. “She said it had real character and that she thought I could play it. I watched the movie and I saw the play in New York when I went to get my costume done. I’m naturally introverted myself so I tried to portray the tortured side of the character.”

For his long program, Oi skated a new program to On the Waterfront by Leonard Bernstein. “That was Mark’s idea,” Oi said. “It was a character I could relate to again. I watched the movie and I really liked the character. I like it when I can feel the story and communicate it on the ice.”

Oi used Meatloaf’s Heaven Can Wait for his show program. “That was another one of Mark’s ideas,” Oi said. “He gave me a few choices and I liked it the best. It’s my second year using it.”

“I can’t say I’ve defined a clear style for my skating yet,” noted Oi, “but I like to skate to a wide variety of music, just not techno or anything like that.”

Off ice, Oi rarely listens to music, but when he does he prefers pop and rock. He also enjoys reading and playing board games. “I’m really into board games like Scrabble and Boggle,” he said. “There’s even a Facebook version of Boggle that I can play with my friends.”

Fellow skater Ross Miner, who trains with Oi, said, “Curran’s almost impossible to beat at Scrabble. He knows all the unusual words and always gets the triple word score.”

Oi is an honor student, a National Merit Scholar, and a member of the 2008 and 2009 U.S. Figure Skating Scholastic Honors Team. He will graduate from Wellesley High School this summer. “I’ve applied to five colleges including MIT, Harvard, Stanford, Berkeley, and UCLA,” he said. “I was accepted early to MIT in December.

Oi announced that he will not be competing in the 2009-10 season, and will instead focus on his first year studies at Massachusetts Institute of Technology.

“I’m still into alternative energy sources, so I’ll probably study nuclear engineering. I think fusion has a lot of potential.”

And so does he.