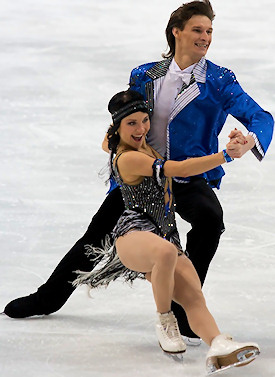 Sometimes it just takes a second to become famous, and this is exactly what happened to Russian ice dancers Ekaterina Rubleva and Ivan Shefer at the 2009 European Figure Skating Championships in Helsinki.

During the Compulsory Dance, the strap on Rubleva’s costume was torn and she desperately tried to hold it with one hand during the dance to cover her exposed breast. The 23-year-old was close to tears as she came off the ice.

The costume malfunction was captured by a photographer, and on the next day, the pretty skater’s photograph was in newspapers and other media worldwide.

Although Rubleva was clearly upset and embarrassed at the time, she can now laugh about the incident.

“I’m a star now,” she joked. “It was a good publicity move. Why should I be upset now? It would be useless. What happened, happened. I try to take it with humor.”

“The photographers, of course, caught the right moment,” her grinning partner added.

After the infamous incident, Rubleva, who already did some modeling work for calendars and clothing, soon got more offers.

Rubleva and Shefer, who have been skating together for 15 years now, began competing internationally in 2001.

Figure skating seems a logical choice for Rubleva, as her parents Svetlana Bakina and Boris Rublev used to compete in ice dance as well. However, her parents didn’t push her to become a skater.

“My parents knew what figure skating means; that it is hard, and they didn’t really see an athlete in their daughter,” explained Rubleva. “On the contrary, at the beginning, they even didn’t really want me to skate. They took me to the ice rink and put me on skates mostly because there was nobody whom they could have left me at home with. They were working, and I was just doing my own things, skating along the boards, playing on the ice. I was about four years old.”

This continued for a time until Rubleva was noticed by other coaches. One coach told her father, ‘look at your daughter. She will become a good athlete.’ “But my father was busy with other things,” she recalled.

When Rubleva eventually started to skate with Shefer, the couple was coached by her mother and by a young coach, Olga Riabinina, who was a student of Rubleva’s father. Rubleva was attracted by ice dance, not only because her parents were ice dancers, but also because she didn’t like to jump.

Shefer’s parents put him into skating to improve his health when he was about four years old. “It happened that they took the other kids as five-year-olds and I as a four-year-old was in a group with older children. When they put me into a group with children of the same age, I was already better than they were, so the coaches noticed me,” the 26-year-old recalled.

The team moved from Kirov to Moscow seven years ago in order to enjoy better and more professional conditions. They first trained under Svetlana Alexeeva and Elena Kustarova, but just finished their third season with Irina Zhuk and Alexander Svinin.

“It was a difficult change for us,” revealed Rubleva, “because our former coaches Elena Kustarova and Svetlana Lvovna (Alekseeva) were wonderful people. However, we decided to change something and to try something new.”

They never regretted the move, and the team is especially pleased to train together with the 2009 European Champions Jana Khokhlova and Sergei Novitksi.

“This helps us a lot,” said Shefer. “We are good friends with them.” “They help us and support us,” added Rubleva, “and we support them. We help each other.”

“I think that this is very good, because it happens rarely in ice dance to have this kind of relationship in the group,” she continued. “Often there is envy in a training group, but luckily there is nothing like that in our group.”

The skaters have time to go home to Kirov only about twice a year. In Moscow, life is not easy for them as they don’t have an apartment, but share a hotel room instead. “We are basically living in the ice rink!” said Shefer. “We are there from the morning until the evening and we rest there during our break between practices.” “Obviously the hotel room is not a real home, but we’ve tried to make it as much a home as possible,” Rubleva added.

Rubleva sees the strengths of their partnership in their unison and their clean, parallel lines. “I also think that the relation between the partners is our strength,” she underlined. “We are very harmonious and we feel each other. This is very positive. People have also said that we are very technical. Maybe there is not yet enough speed and power, but technically we are strong.”

As for their weaknesses, Rubleva names a certain lack of confidence. “Obviously this comes with experience,” she admitted, “and I think if we get this, we can achieve good results.”

While Shefer looks up to Evgeni Platov as a role model in ice dance, Rubleva doesn’t really have any idols in the sport. “There are some qualities of other skaters that we like and that we try take for ourselves,” she said.

Competition in Russia is tough, and for both ice dancers, Russian Nationals is the hardest and most stressful event of the year as they need to qualify for the National Team. For three consecutive years now, Rubleva and Shefer medaled at Nationals and competed at the European Championships in 2007, 2008 and 2009, placing 12th, 13th and 8th, respectively.

Rubleva and Shefer were also on the World team in 2008 where they ranked 15th. The team didn’t get to go this year as Russia had only two spots, however, there will be three spots next year for Worlds and the Olympic Games.

“We have dreams, but we don’t really want to voice them,”Rubleva answered when asked about their goals. “Maybe in order not to jinx ourselves. For the moment, the most important goal is to move forward, not to stagnate.” “We were told that we made a big step forward and this is something we like to hear,” added Shefer, while agreeing that there should be constant progress.

During the interview it is noticeable how well the dancers get along, and how easily they communicate and complement each other. Rubleva, who has been dying her hair black for the past two seasons, is a lively and talkative person, bubbling with energy, while Shefer is a more quiet and calm young man. They feel their relationship is like brother and sister, and they never were a couple off the ice.

“I could talk a lot about him,” said Rubleva of her partner, “because we’ve known each other for such a long time. We are very close. He is like my second leg. Without him, I don’t feel comfortable anymore.” “I basically agree with her,” Shefer added with a smile.

Both skaters finished their studies for the coaching diploma and are now focusing fully on their sport. Rubleva even passed the exam for a technical specialist in ice dance at the national level and has been judging domestic competitions.

“Now I understand how hard judging is,” Rubleva sighed. “It is very difficult what is required from the judges and technical specialists. There is not much time when you have to look at everything – when you have to watch two people. Even when they split up during the footwork and one (specialist) is watching one partner and the other is watching the other partner – it is still very difficult. When I started judging, they told me that I need to focus and to watch only the elements. But I’m watching and then I get so drawn into the program that I forget about everything else. What elements? The others say, ‘Katia, the elements are over.’ I think it is very hard to focus only on the elements.”

Performing is the aspect that fascinates both athletes most about skating. “I think the positive feeling after a good performance is the most unforgettable moment,” stated Shefer.

His partner agreed adding: “The feeling when you know that you have won the love of the audience is just crazy. I don’t know where else in life you can find this kind of emotion. The satisfaction of having completed your work successfully is pure happiness. It is just great when you showed everything that you can do and gave the audience something to enjoy.”

They both hope to continue to do so for the next season and many more to come.