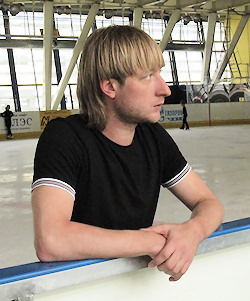 Evgeni Plushenko at a practice session at the Yubileini rink in St. Petersburg, Russia

A sunny, warm morning in the last week of May in St. Petersburg, Russia, and world famous coach Alexei Mishin is on the ice in the bright Yubileini practice rink with its large windows teaching his young students. Music is playing, and junior skater Artur Gatchinski is working on the choreography for his free program, while 12-year-old Russian silver medalist (senior level!) Elizaveta Tuktamysheva is practicing a triple Axel – and comes close to landing it.

Some other kids are skating around on the ice, jumping and spinning, everything under Mishin’s watchful eyes – who calls them over one by one to give instructions and/or to correct mistakes.

At 10:35 AM, a young blond man – taller and older than the other skaters, dressed all in black, takes the ice. His speed and command set him apart immediately. Evgeni Plushenko, reigning Olympic Champion, 2002 Olympic silver medalist, three-time World Champion, and five- time European Champion has started his practice.

“This is the first day of my preparation for the season after my vacation,” Plushenko said 90 minutes later in coach Mishin’s office. After three years of skating and touring with his own ice show “The Golden Ice of the Stradivarius,” serving as a deputy in the city parliament of St. Petersburg, and performing with Russian singer Dima Bilan to win the Grand Prix d’Eurovision song contest, Plushenko is back to a regular two-times a day practice session. David Avdish is working with him on choreography and he is also receiving off-ice training with two former track-and-field athletes.

Oddly enough, not much seems to have changed. The rink still looks the same as it did years ago. Coach Mishin is still there, working on the ice or standing at the boards. Only the kids have grown. Plushenko is back now and he wants to be on the podiums of the international figure skating world once again.

“My idea is …I still want to win something,” Plushenko explained when asked about his motivation to return to competition after having won every possible title. “I have to try to become a two-time Olympic Champion. But even if I don’t manage to win the Olympics again, just to make the top three would be a very good result.”

“I have a friend, ice hockey player Alexei Zhavnov,” he continued. ‘He has three Olympic medals – gold, silver and bronze. When I was second (in Salt Lake City in 2002), he said, ‘well, you need another medal’. When I was first (in Torino in 2006) he said, ‘now you have two medals, but I have three and if you come back and take the bronze, that would be really good’. So, it looks like I listened to him and I want another medal,” Plushenko grinned.

“Which one it will be …I will try my best that it will be the highest possible award – the gold medal,” Plushenko continued. “But even if it doesn’t work out, I won’t be upset. I will take it gracefully even if I’m outside the top three. Everything can happen because nobody can take away from me the medals that I have. Nobody is taking away my title (from 2006). Just someone else will be Olympic Champion and this will happen sooner or later anyway.”

“I missed competing,” Plushenko admitted. “I missed this adrenalin shot. You don’t have that in the show. I want to compete. I missed this specific competitive atmosphere. No matter if it’s the trip to a competition, the hotel, the trip on the bus to the ice rink, or the events after a competition. I want to live through all this again and to remember my youth, although I am still young.”

While his mother is against Plushenko competing again, his fiancée, Jana Rudkovskaia, is very supportive. Others are very much in favor of his decision as well.

“I think the Olympic season will be much more exciting with Plushenko competing, offered choreographer Avdish. “His comeback should draw a lot of interest from public and media.”

Stéphane Lambiel, who performed together with Plushenko in his shows this spring, agreed. “It would be great for figure skating if he is competing again. He looks like he is in much better shape than last year. If he continues to train and keeps going, this could be great for the sport and for him – especially if he wins a third Olympic medal. He is very strong and he has a lot of energy and charisma, nobody can deny that.”

Plushenko knows what he has to do. “I have three months until my first competition, and I don’t have much time,” he pointed out. “The most important thing is to stay healthy. I’ve started to train seriously before my European tour (in spring) and I got back all my elements within two months – like the triple Axel. I landed six triple Axels in one show (in Germany in late April), and I’ve never done this even when I was at my best. I did a quad toe as an encore.”

Now the 26-year-old is working on his two new programs, a short program to the Chopin theme from the movie The Pianist and a Tango piece for the long – both arranged and played for him by his good friend, Hungarian violinist Edvin Marton. “I picked the music, but it’s not completely ready,” stated Plushenko. “We still have to change something. Actually, nothing is really ready yet. There are only ideas. But as past experience tells, and we always had the will to succeed, everything can happen very fast.”

Plushenko, choreographer David Avdish, and coach Alexei Mishin (from left to right) discuss the short program step sequence.
The next day, Plushenko, coach Mishin, and choreographer Avdish put together the circular footwork for the short program within an hour. Turns, steps, twizzles, upper body and arm movements. They discuss every move, every detail. They try something, reject it, and take something else. One idea builds on the next, they incorporate it, they feed off each other.

It is an amazing, very creative process, and at the end, the step sequence is packed not only with elements, but also with gestures and details that reflect the theme of the program. The movie plays in the second World War and tells the story of a Jewish pianist in the horror of the Warsaw ghetto.

“This was a very productive practice,” Mishin said, obviously pleased, “but we still have a lot of work ahead of us.”

Plushenko was already hard at work for two months earlier this year. “It was extremely difficult at the beginning and I’ve asked myself, ‘why I’m doing this?’ I have everything that I need. I have a phone, I have a car, a house, an apartment, money …I don’t need more. I thought, ‘why am practicing spins, jumps, steps?’.

The falls and injuries are inevitable, however, the will to compete again, to be on the podium again, is stronger. “My future wife, Jana, pushed me into this direction already last year,” Plushenko pointed out. “She said, ‘you are still young, you can do it’.”

Many people are still doubting if the Olympic Champion will really will come back, especially since he talked about a comeback last season but then skated in shows instead.

“Last year, I participated in three training camps of Alexei Mishin and I had an off-ice coach, but then my meniscus started to hurt again,” explained Plushenko. “The right and the left one as well. I went to Munich for treatment. I felt that I just didn’t have enough time to get ready. My knees stopped me. When I got an offer to skate in the show, I picked the show.”

This year, however, is different. “Three months ago I trained hard and I saw that it was going well,” said Plushenko. “So I made a decision and went to see Valentin Nikolaevitch (Piseev, President of the Russian Figure Skating Federation).” Piseev reacted positively on Plushenko’s quest for another Olympic medal and invited him for the Grand Prix Rostelecom Cup in Moscow at the end of October.

Before that, however, Plushenko will have to present his new routines to the Federation officials at the traditional test skate that is scheduled for August 24 in Novogorsk near Moscow. He wants to start his season in Samara in early September at a national competition. He also plans to attend Finlandia Trophy in the second week of October.

For the preparation during this summer, Plushenko will train under Mishin’s guidance in camps in Estonia, Italy, and Germany in June and July. Back in Russia in August, he plans to marry his fiancée Jana in Moscow. In everything he says and plans and does on the ice, he seems very serious and determined.

“I know it is very hard, but it is possible,” Plushenko said about his chances for a strong comeback. “I know that I have a lot of rivals. I didn’t compete at the World level for three years and I’ll need to be a class above them.” He also underlined Lambiel as a potential rival and firmly believes the two-time World Champion will return as well.

Plushenko is already a part of figure skating history, but he wants more. If he indeed wins a second Olympic gold medal, he would be the first male skater to repeat as an Olympic Champion since Dick Button, who won in 1948 and 1952. He would also be the second man in history to earn more than two Olympic medals. Nobody has won three so far, but Gillis Grafström of Sweden claimed four – three gold and one silver from 1920 to 1932.