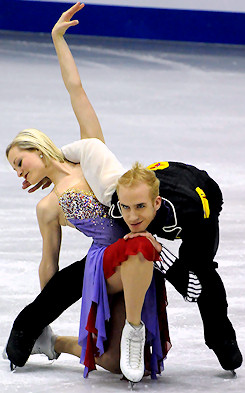 Vancouver natives Tarrah Harvey, 19, and Keith Gagnon, 21, have been dancing together for over ten years, but never reached the podium at Canadian Nationals until this season. Since then, their success has continued.

The duo placed fifth in novice dance at Canadian Junior Nationals in 2005, but then languished in 13th place in junior dance for the next two years. Last season, they placed fourth before reaching the podium in 2009 with a silver medal.

That earned them a place at the World Junior Figure Skating Championships in Sofia, Bulgaria, where they placed 12th. Earlier in the season, the dancers placed fourth at the ISU Junior Grand Prix in Merano, Italy and fifth in Gomel, Belarus.

Next season, the couple will compete only in seniors, however, with few world ranking points, will not be participating in the Grand Prix series.

Gagnon started to skate when he was five. “My mother was a coach and she wanted my brother and I to start skating,” he recalled. “My brother quit, but I stayed around. I skated in singles until I was 14 and can still do a double Axel, but I only competed up to pre-novice.”

Other sports couldn’t keep his interest. “I had brief episodes where I tried other sports,” admitted Gagnon. “I tried gymnastics for a year when I was five or six. Then I tried diving when I was eleven, but I had an eye injury and had to give it up after a few months.”

Harvey started skating when she was three. “My mom was a figure skater and she got me into it,” she recalled. “All of the women on my mom’s side of the family were figure skaters.”

She also started taking ballet when she was about five and is still continuing her classes. “I’ve always taken dance classes, both ballet and jazz,” said Harvey. “And I competed in jazz.”

Harvey competed in singles up until pre-novice when she was 14 and had jumps up through a double Lutz. “I just enjoyed dancing more,” she said, “so I wanted to fully commit to it.”

The partners have skated together since June 1998. “We’ve been together since we were eight and ten,” Gagnon noted. “I started doing dance just for fun, then decided to do the tests. Megan Wing and Aaron Lowe put us together initially, then Rodney Mackie gave us the basics. After we finished 13th twice, we thought that maybe it was time to quit, but then Megan and Aaron set up their school and we’ve been with them for the last two years.”

Harvey and Gagnon work on the ice for about three and a half hours a day, five days a week. They train in Burnaby, British Columbia.

Harvey also does a couple of hours a day of off-ice training including dance classes, cardio and gym work.

“I go directly from the rink to a two-hour dance technique class at university,” Gagnon said. “I take some other dance classes at other places and go to the gym on the side.”

For the 2008-09 season, the skated a Charleston to “Tiller Girls” from the soundtrack of “Cabaret” by John Kandar and Fred Ebb and the blues to “Sam’s Blues” by Sam Taylor.

“They [Wing and Lowe] knew what they wanted us to do,” said Gagnon. “It was such a feel good number. It was easy to get amped for it.”

“That was my music,” Gagnon said. “We wanted to stick with a theme and the pieces went well together. I really liked the way that they ran. We always like to tell a story if we can. It makes more sense.”

“At the beginning, I’m an innocent girl who’s asleep,” Harvey explained of the theme. “He’s a crazy guy in a quirky fantasy world. He wakes me up and shows me his world and then we fall in love. At the end, I have to decide to go back to the real world or stay in the fantasy world and I decide to stay.”

For the 2009-10 season, the dancers are using a medley of tunes from Charlie Chaplin movies for the free dance and a Celtic-themed original dance.

For shows, the dancers use Santana’s Why Don’t You and I. “That’s something I found again,” Gagnon said. “I have a large musical archive. Some of our more unusual musical choices come from me.”

“I have everything from opera to classical to goth rock to country to hip hop,” Gagnon continued. “I’ve been playing the guitar for years and even got offers to play in bands, but I had to turn them down because it would have interfered with skating.”

“I listen to a lot of different music,” Harvey offered, “but mostly country, pop and mellow stuff.”

Gagnon also enjoys playing billiards and snooker, windsurfing, paintball, and target shooting with a compound bow. He also paints in both watercolor and acrylic. “I’ve had art lessons since I was eight,” he said. “I like doing floral examinations with a bit of an abstract quality. I want to do something that’s interesting and engaging for the mind.”

Harvey likes to spend time with her family and friends, especially some of her younger cousins. She also likes to play tennis, run by the beach, and water ski at a lake in the interior where her family goes for holidays.

Gagnon is in his third year of studies majoring in dance at Simon Fraser University. “I’ve always been interested in dance,” he revealed. “I got into contemporary dance as a teenager. I love it to death. Some day, I’d like to perform in a ballet or modern dance company like the Cunningham Dance Company or Alvin Alley Dance Troupe.”

Harvey is less sure of a future career. “I took some classes in general studies at Kwantlen Polytechnic University last year, but I took this year off.”

Although the 2010 Olympics will be held in their hometown, the dancers aren’t expecting to be able to compete there. “I think 2014 is more realistic,” Gagnon said.