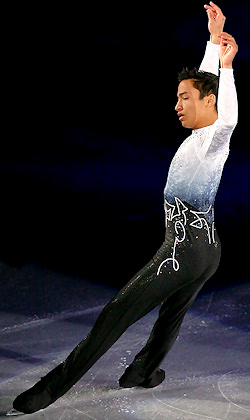 France has a history of strong Men’s single skaters. Right now Brian Joubert is undoubtedly the number one with five World medals on his record, but who will be Joubert’s successor in France once he retires from competition? After last season, Florent Amodio has become the heir apparent.

In what is a funny coincidence, Amodio debuted at Junior Worlds in Oberstdorf, like Joubert did in 2000, just seven years later. Like Joubert, he finished in 15th place but still was noticed by observers who recognized his talent. Unlike Joubert, however, Amodio continued to compete at the junior level and celebrated his biggest success so far when he won the Junior Grand Prix Final last December.

The Frenchman seemed poised for the podium at Junior Worlds in March, however, it didn’t happen. Amodio imploded in the short program, singling the Axel, doubling the Lutz, falling on a spin, and finished 19th. He pulled up four spots in the long and thus ended up where he was in his debut two years before.

“I’ve learned a lot of things about myself that I didn’t know before,” Amodio said when talking about his experience at Junior Worlds. “I learned technical things. For example in my short program. My warm up went really well, but I skated fifth (in the group) and I wasn’t active enough in the time between the end of the warm up and my skate. I didn’t remain focused enough. I didn’t attack this competition the way I should have. I didn’t get into it. I wasn’t fighting enough. I didn’t expect to mess up the short program.”

Amodio came to Sofia to win, but the results of   the short program  were difficult for him to digest and made it hard for him to attack the free skate. “The motivation wasn’t quite there,” he admitted. “I tried to fight and to give my best, but it was hard. I still drew a lot of positive things from it. It was a lesson for me. I think it’s important to learn for the future from a defeat.”

With the exception of Junior Worlds, Amodio’s last junior season was successful. He won a Junior Grand Prix (JGP) event, medalled in another, and then won the JGP Final. He also finished second at French Nationals at the senior level. He won Junior Nationals (that are held at a different date than senior Nationals) and came in 10th at the World Team Trophy, which was his first international senior competition. There, the Frenchman even risked the quad Salchow, but missed it.

Actually, the odds for Amodio to become the “up-and-coming” figure skater he is today were almost non-existent. He was born in Brazil and abandoned in the streets, but then was adopted by a French family as an infant and raised in France. “I started skating when my parents went to a public skating session. This is when they put me on the ice for the first time and my coach (Bernard Glesser) discovered me,” the 19-year-old summed up. “I was very young and it wasn’t my choice, but I just continued skating and I’m enjoying it.”

At 12, however, misfortune struck  when Amodio was diagnosed with Osgood-Schlatter disease – an affliction which leads to knee pain and edema. As a result, his career was interrupted for almost two years. “This was a dark time in my little skating career,” the teenager said. “It is very hard to stop for so long once you’ve started competing. The worst thing about this illness is that you cannot train at all.”

Nevertheless, the Frenchman was determined to come back. “I never wanted to stop skating,” he continued. “On the contrary, I think this experience made me stronger mentally. Yes, it was a hard time, but you have to get over it and to move on. You have to think about the positive things that are to come. This is what you are working for and work pays off. This is no secret.”

First of all, skating was fun to Amodio and he never thought that he would get as far as he did. Still, once he started to compete in bigger events and trained three to four hours a day, he realized that skating had become a kind of profession for him.

During the first years in secondary school, the athlete went to class like everyone else, but then he could no longer balance school and training and switched to correspondence courses. “We had to make a decision and I studied at home,” Amodio recalled. “It went very well, and I passed my final examinations. I took school serious, because I know that it is important to have some qualification besides skating. Now I’m continuing to study. I want to get my coaching diploma. It is less intense than school, but I still have something else besides skating.” Although he is studying for a coaching diploma, he isn’t sure if he wants to coach later on, but he definitely wants to work in the sphere of sport.

Maybe it is because of his special background that the young athlete shows a maturity beyond his age and can appreciate things that others may take for granted. “I know my goals,” Amodio pointed out. “If there are setbacks, I stay positive in my mind. I really can’t complain about my life. I was born in Brazil, but I got the chance to do all this and to discover the world of figure skating. I have my parents and all my friends. I’m a very positive person in spite of my defeats. I have a privileged life and I am happy to do what I’m doing.  I obligate myself, not to complain, because there are so many people living in misery. I got this unique chance in my life.”

The skater actually holds both French and Brazilian citizenship, but never thought about representing Brazil in competition. “Brazil is my country where I was born and it will remain close to my heart, but I’m living in France. I spent all my life in France, and therefore I’m competing for France,” he explained.

Amodio describes himself as open-minded and easy going. “I really don’t have any problems with other people. I like to open up to them, but they shouldn’t anger me – this is something that I don’t like. I’m a fighter. I stay with both feet on the ground.”

His weaknesses are “plentiful,” he laughed when asked about them. “I will correct them! We work hard on improving them in my skating – like my consistency – although this did get better already.”

The 19-year-old doesn’t really have idols in skating that he looks up to. “There are people whom I respect, for example Evgeni Plushenko. It is wonderful to watch the great skaters, but they are not my idols. I have idols elsewhere, for example musicians. I really admire Usher,” Amodio revealed. “I think it is great if someone can transcend to millions of people like he does. It is the best thing in the world when millions upon millions of people are admiring you,” he pointed out, adding that as a figure skater it is also his goal to inspire many, many people.

Next season, Amodio will compete at the senior level and in the Grand Prix and has the chance to make himself known to more fans than before. He has been selected for the Rostelecom Cup in Russia (where he may have the chance to compete against Plushenko) and for Skate America.

Amodio changed both programs for the Olympic year. For the short program, the skater has chosen music from the haunting soundtrack Munich by John Williams. “This is a magnificent [piece] that I liked right away. I’m really counting on showing all the qualities of my skating [with it],” he noted. “As for the long program, I will keep it as a surprise for now.” Both programs are choreographed by Stanick Jeannette. Additionally, Tyler Miles worked on the choreography of the long program during Amodio’s stay in Canada.

After a short vacation on the Spanish island of Majorca in June, Amodio went for three weeks to Canada to train with Doug Leigh. After that, he will take part in a summer training camp of the French team in Epinal in the east of France to polish his programs with the help of Alexander Zhulin. In August, the French Vice-Champion plans to attend a training camp in Méribel in the French Alps to improve his endurance and general physical condition.

Although some officials within the French Skating Federation put pressure on Amodio last season to leave his long time coach Bernard Glesser in order to move to a “more famous coach,” the skater stayed with him. However, he is open to participating in training camps with other top coaches to get some additional input. This spring, he also went to St. Petersburg to work with Alexei Urmanov, but still regards Glesser as his primary coach. “My coach and I are a team,” Amodio confirmed.

Amodio is looking forward to the next season. “The senior level is the world of the great skaters. This is what you dream of as a little rascal. I really want to express myself completely,” he announced. “For this year my goal is to show great performances and I will work even harder for it. The quad (Salchow) will be in the free program. It would be wonderful if I qualify for the Olympic Games, but I still have time and we have a very high level of skating in France right now,” he continued.

“The senior level is a new world for me and I’m very impatient to get there,” Amodio admitted. The figure skating world is impatient to see him there, too.