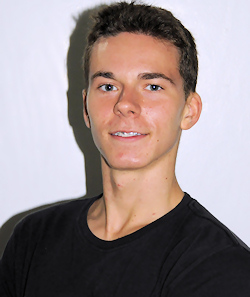 Last month, Alexander Zahradnicek began his season with a big win at the Liberty Open in Aston, Penn. The 17-year-old won the short as well as both initial and final free   programs to dominate the junior men’s competition.

“Liberty’s always a very tough competition,” Zahradnicek said. “I wasn’t focused on winning, just on skating consistently and getting a personal best score. My short was clean, but I stepped out of two jumps in the qualifier for the long. My long in the final was clean.”

Zahradnicek first gained national attention when he won juvenile men at U.S. Junior Nationals in 2004. He followed that up with a bronze medal in intermediates in 2005.

Zahradnicek won the Novice pewter (4th place) medal at 2008 U.S. Nationals. He moved up to juniors last season (2008-09), but placed 7th at Eastern Sectionals in November 2008 and therefore did not qualify for 2009 Nationals. As a result, his performance in the Junior Men’s events at Liberty in July were all the more noteworthy and the reason why he was selected by U.S. Figure Skating to compete in his first-ever Junior Grand Prix event in Belarus.

Zahradnicek didn’t start out as a skater, but as a skier when he was four or five. “I was a ski instructor when I lived in Australia,” said his father, Joseph. “I was hoping Alex would follow after me.”

“I didn’t start skating until I was eight,” Zahradnicek said. “I tried lots of other sports first. I did tennis, swimming, T-ball and soccer, but I didn’t like team sports. I wanted something I could do by myself.”

“When we lived in Greenville, N.C., we started going to a new rink to go to the public skate on Friday and Saturday,” he continued. “I saw other people jumping and spinning and wanted to do that so I started skating every day.”

While there, he once performed with Stars on Ice in 2001, skating the part of a young Scott Hamilton.

Zahradnicek trains for three to four hours a day, five days a week with another hour of daily off-ice training. “I usually do two days of ballet, one day of Pilates and jazz, and two days of conditioning,” he said.

Irina Romanova choreographed his 2009-10 programs, both of which are new. “My short program is a guitar version of Masquerade Waltz by Khatchaturian,” he said. “Irina played it for me and I thought that it was cool and different. The free program is a revamped version of Bach’s Toccata and Fugue by Paul Mauriat. I’d heard it before and liked it. It’s the version Irina and Igor (Yaroshenko) skated to at the 1996 Worlds.”

“I’ve been working on my triple Axel this summer,” he stated. “It’s getting closer and closer every day. If I get it, I may add it to my program later this season. I’ve also been working on a quad toe in harness.”

“I need to add more transitions into jumps and do other things that will get me more points,” he underlined. “The new system has helped me to focus more on performance and execution.”

“I want to keep improving my scores at every competition,” stated Zahradnicek. “I’d like to make top four at Nationals. If I do, I’ll probably move up to seniors in the U.S., but hope to do some Junior Grand Prixs internationally.”

“I plan to continue competing for at least ten years, then I’d like to coach,” he said. “I’m in my senior year of high school through home schooling and hope to go to the University of Delaware to study physical training.”

Off ice, Zahradnicek likes to hang out with friends, watch comedy and action videos, and listen to any kind of music except country. Occasionally, he plays tennis or soccer with friends.