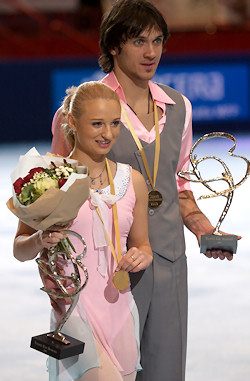 Winning the Trophée Bompard this weekend was a major breakthrough for Russian pair skaters Maria Mukhortova and Maxim Trankov – not because they beat reigning World Champions Aljona Savchenko and Robin Szolkowy of Germany, but mainly because they skated two perfectly clean programs.

Last year, the couple delivered strong short programs but struggled with their free program in each competition.

“I think this is the result of the good work that we’ve done over the summer and fall,” coach Oleg Vasiliev said. “They’ve worked a lot on the free skating. It wasn’t easy, but as we say in Russia – it’s hard to learn but it’s easy to do in battle.”

“The learning process was difficult,” he added, “but when they came here, it wasn’t  as hard for them to do the free skating as it was last year, and they were able to deal with the program.”

Mukhortova and Trankov presented two new programs in their first competition of the Olympic season. The short program is set to Apassionata by Secret Garden and for the long program they chose Love Story. It was actually the choice of Mukhortova. “I really was impressed with how (Jamie) Salé and (David) Pelletier skated to Love Story in 2002 at the Olympic Games and this stayed in my memory,” she explained. “This music touches my soul and I’ve wanted to skate to it for many years. Now finally my dream came true,” she smiled.

The couple actually wanted to use Love Story two years ago but as their Russian rivals Yuko Kavaguti and Alexander Smirnov chose the same music, they had to stick with their Rachmaninov free program from the year before. “I’ve actually skated to this music with my previous partner when I was young,” Trankov said. “I also like this music, but I’m not as euphoric about it as Masha (Maria).” But he agreed to it readily, especially as he had picked last year’s The Lady and the Hooligan. “This year’s program feels really comfortable to us,” Trankov continued. “We skate it with pleasure. We are using a music that Masha likes, because this is really important to her.”

The couple spent six weeks training in Chicago this summer before returning to their home rink in St. Petersburg in early August. “We’ve trained very well during the summer in Chicago,” Trankov said. “We started our season earlier than usual and we tried different versions of our short program already in August and we skated the short at a competition in America (Skate Detroit).” “We’ve polished our elements and this program is helping us,” added Mukhortova.  “It’s easier for us to skate (than last year’s program), the music is light and doesn’t feel heavy. With this music we can fly.”

The couple was obviously pleased to win the first Grand Prix gold medal of their career, but they are well grounded. “If they (Savchenko and Szolkowy) had skated more or less well, we could talk about a victory, but they didn’t do most of the elements,” Trankov offered. “We just skated. We did our job and got our marks and they didn’t do their job. But this (win) gives us confidence. After we skated a clean short all season last year we now want to skate both programs always clean,” he pointed out.

Interestingly enough, the top three couples from the Trophée Bompard – Mukhortova and Trankov, Savchenko and Szolkowy and Canadians Jessica Dubé and  Bryce Davison – will be up against each other again in four weeks at Skate Canada. The competition will take place in Kitchener, where the Russians won their World Junior title in 2005 and Dubé and Davison finished second.

Mukhortova and Trankov now want to begin  preparations for their second Grand Prix event. They plan to include the side-by-side triple Salchow instead of the double Axel as their second solo jump (besides the triple toe) later in the season, but haven’t made a decision yet when this will happen.

“We do the triple Salchow as soon as our coach tells us to,” Trankov said. “It’s actually paradox as the Salchow is working better in practice than the double Axel, but the Axel works better in competition. I also think that we can improve our triple twist to achieve a higher level. The twist is good now and everybody likes it, but it’s just a level one. We got a level four for all the other elements, so I don’t know what else we could do to make our program more difficult.” “First we have to grow confident that we can skate clean with the Axel. The Salchow will come later,” Mukhortova added.

The skaters plan to go to Chicago two weeks before Skate Canada to get over the jetlag. “Before we leave, we’ll have to work a lot with our choreographer, because he isn’t coming with us to Chicago,” Trankov noted. “This year the program may look easier, because it looks easy, but it is still difficult,” coach Vasiliev explained. “But this is the way it should be. The spectators don’t want to see hard work, they want to enjoy it.”