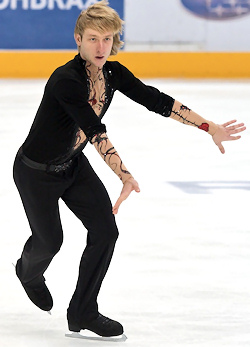 Russia’s Evgeni Plushenko performs his long program at the 2009 Rostelecom Cup of Russia.

At the end of his free skating program at the Rostelecom Cup in Moscow, Russia’s Evgeni Plushenko first raised his index finger, then pointed on himself. ‘Look at me, I’m back and I’m still the number one,’ said this gesture.

Savoring the sweet taste of victory, the reigning Olympic Champion skated an extra round and pumped his fist before bowing to the judges and the cheering crowd at the Megasport Arena. These emotions were exactly what he had come back for.

“He didn’t compete for three years, but as soon as I saw him, I knew that there was a true Olympic Champion on the ice,” respectfully said Japan’s Takahiko Kozuka, the distant silver medalist at Rostelecom Cup.

“Hats off,” commented France’s Brian Joubert in his usual straightforward manner, speaking on the phone from France where he had followed the event via internet. “Plushenko’s return is good for the sport, the spectators and his competitors,” he added.

“He will be hard to beat,” offered Plushenko’s long-time rival, 2002 Olympic Champion Alexei Yagudin, who watched from the stands in Moscow.

Three and a half years after his last international competition, the Olympic Winter Games, the Russian proved that he is truly back. After his dynamic “Tango Amore” free skate (which included a quad-triple toeloop combination, two triple Axels and four other clean triples), it was almost forgotten that the 26-year-old had doubled the Lutz in the short program. It suddenly seemed like a minor negligence.

In spite of all the enthusiasm around him in Moscow, Plushenko remained calm and professional. “I am very pleased with my (free skating) performance. I made no mistakes in my jumps. I’m happy with my quad-triple combinations in these two days and there were good triple Axels,” he noted.

“Obviously there is still a lot to do,”  he continued. “I have to work on my steps and spins. So we won’t stop on what we achieved, but we will continue and go further and further. The big battles are still to come. The most important competitions are still ahead of me… these are the Russian Nationals, Europeans and the Olympic Games, of course.”

Not many people had believed that Plushenko would really come back and be as competitive as he is. “I thank my supporters and my enemies,” the skater said with a mischievous smile. “I’m actually following all these chats and forums and what people write on my website, even on the unofficial ones,” he revealed. “I was surprised to read things such as ‘It is not right that he is coming back and winning’ or ‘Well, he is coming to the Grand Prix now and he will finish second or third and then he’ll stop.'”

Even some of his former friends with whom he competed against for a long time gave some negative comments. “It hurt,” admitted Plushenko, “but I just wanted to prove to them and everyone that I still can skate and compete. So I’m thanking them for their critique. It was an extra motivation for me. And of course I want to thank the fans from all over the world.”

The three-time World Champion showed the same qualities that brought him to the top before: consistency, strong technique, and presence on the ice. Although it may have looked easy, it was not. The pressure was huge.

“Of course I was nervous, very much so even,” Plushenko admitted. “I had to skate first in the short program; I had no (ISU) ranking, zero points. It is my first serious competition and I have to do everything. Then I skated last in the free. I saw how the crowd applauded and cheered for Kozuka and I thought that he had landed everything in the program. I realized I could not afford a single mistake because each error can cost dearly. So there was nervousness, but I was able to overcome it. God and my protecting angel were with me, and I’m very glad about that.”

His second wife, Jana Rudkovskaia, also seems to be a protecting angel for him. She attended the competition and cheered for him and he credits her for bringing him back into the sport. “I dedicate this victory to her,” said Plushenko.

Now the athlete goes home to St. Petersburg to prepare for the upcoming events. He currently plans to compete at a domestic Cup of Russia event in Moscow at the end of November and at the Russian Nationals in December before going to the European Championships and Olympic Games. Coach Alexei Mishin is pleased with his student’s progress.

“So far he has been skating better and better,” said Mishin. “The life outside the sport has turned him into a more serious person and made him more complete as a performer. I won’t say what we now especially will work on for our next competition as this would mean to talk about our weaknesses.”

The athlete had to give up a lot for his quest for a third Olympic medal, but Plushenko doesn’t regret it. At the same time he remains realistic. “I’m at 70 percent today. I’m not in top shape yet. I know my mistakes and my weakness, and I’m hard on myself and my coach and choreographer are hard on me. I won’t stop. I will continue to work,” he promised. “Obviously medaling at the Olympic Games is my goal, but first I have to get there. Anything can happen. Injuries can happen and I won’t be able to compete.”

Right now, however, it looks like one of the banners in the ice rink in Moscow summed it up pretty well: “The return of the king.”