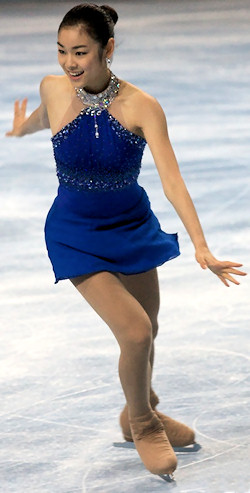 “I was stunned watching it (the score),” said Kim. “I didn’t think about renewing my personal best again here. I wasn’t expecting it at all. Last season, I got my best score for the short program at the World Championships. TEB is the first Grand prix this season. I tried to do exactly what I’ve prepared.”

Hendryk Schamberger, a German Eurosport commentator, said ‘If Yuna goes clean, she is unbeatable’. However, the current world champ was not perfect. After executing a perfect triple Lutz-triple toe combination, Kim missed her second jumping pass on a triple flip.

“I couldn’t do my second jump because something seemed to be on the ice,” she explained. “It made my blade uncomfortable and a bit shaky. So I didn’t [attempt it], but I’m satisfied with that other elements were completely carried out.”

Kim also set a new record for the combined total score under the ISU Judging System at TEB, and is also the current record holder for the Ladies’ Short Program (SP).

“Figure skating is not a record-breaking sport such as swimming,” Kim observed. “Every single time I compete, I try to do an impeccable performance and express all of myself. What I like to do is be prepared. When I’m perfectly prepared, I’m better within my performance. That’s my limit.”

The 19 year-old is especially excited about her new Long Program (LP) this season. She enjoyed acting out the characters of her previous long programs to Scheherazade and Miss Saigon and continues to do so. In addition, however, she now tries harder to express the music itself.

“I have great affection towards my music for the LP. I usually prefer SP to LP because the SP is shorter – less pressure,” Kim said, laughing. “But especially, I love this year’s FP a lot more than the SP. It’s easier to feel and perform it.”

Kim doesn’t attribute her confidence to  her record-breaking streaks, but to being prepared. “TEB is  my first competition after becoming World Champion last March,” she noted. “I knew that more people [would] fix their eyes on me. I was truly a bit strained thinking of it, but I handled the pressure even at the first competition. If I were prepared, I wouldn’t be worried about the performance.”

Kim, who has been training in Toronto under Brian Orser since early 2007, has not focused on any special element this season.

“I really want to improve all aspects of my skating,” Kim underlined, “so I’ve been determined to stick to what I usually do. That’s why I work on every single element. There is still a lot  to do to being perfect. Frankly, I didn’t do all the ‘ins and outs’ of what I’ve prepared and would like to do. It’s just about 80%.”

Kim finds dealing with the press and media a bit easier than when she first became a skating phenom.

“Just right before the performance, if I’m too focused, I truly get nervous and strained,” she admitted regarding journalists and press. “But now it doesn’t matter. I’m already used to the media. I can say to myself, ‘Ok, pull yourself together!’       Life is unpredictable, so we don’t know what’s going to happen in the future. If I can deal with the burden and anxiety well, I won’t be embarrassed when I’m faced with other hardships in my life. So it’s a kind of nice experience for being strong.”

The two-time Grand Prix Final champion, who is known for her extraordinary movements on the ice, does not take any special acting classes to enhance her choreography.

“All my programs are delivered by David Wilson, my choreographer,” Kim explained. “I have some ideas that I want to put out there. We made together a detail of my program day by day. The black nail color (in her James Bond routine) is also everyone’s idea.”

“I was actually very shy and reserved,” she continued, “but I’ve changed into a broad-minded person participating in the competitions and with my world-leveled experience as a skater. Acting on the ice is the most important thing for me, and I got used to it. I love doing performances in front of the audience which makes me feel real.”

Since 2006, Kim has grown and matured into a healthier, slimmer, and taller woman. “Now I am nineteen. Everyone tells me, ‘You look grown up’, but I have no idea because I didn’t measure myself. I think it must be a little bit. Nothing is harmful for my jumps, however.”

Kim trained in the USA for her distinguishing jumps. “I could learn it in Korea as well,” she said, “but considering general practice circumstances, abroad training is much better.   When I first learned the triple toe loop, the teacher used a harness.  I was hung up with it. If he pulled, I could do the triple toe loop jumps. One day he suddenly asked me, ‘Try doing jumps, I won’t pull it out’. I tried and I successfully did it. So I thought that he pulled, but he didn’t. We also tried doing jumps without the harness. Again I successfully did it. That’s how I’ve learned the triple toe loop.”

Kim is a national icon and beloved celebrity (Gook-Min Yo-Jung) in her country. When she can, she gives support to the next figure skating generation in South Korea, and thus far her donations have totaled approximately two million dollars since 2007.

“Figure skating requires a lot of money,” acknowledged Kim. “We basically need the skates, ice rink, costumes, and choreography for each season. As a competitive skater, we need to go abroad regularly for training. A personal coach is needed for everyday practice. When I was young, I didn’t know very well how my parents struggled to support me. I know how it is hard to be a skater. Even if there were a young, talented skater, she might be forced to give up skating because of financial trouble. I’d like to help her and others reach their goals.”

Kim, who has a long-time dream of going to the Olympics was ineligible in 2006 due to age restrictions. “I’ve watched the Olympic game since 1998,” she said, “and I eagerly want to be there like all other skaters. I’ve been looking forward to taking part in the Vancouver Olympics. To be honest, thinking of the Olympics, I always get butterflies in my stomach, but I’ve tried to maintain good  physical condition and moods since last year. It makes me feel at ease.”

Kim’s goal for the Olympic season is to continue to further her skills in the sport.  “What I want to avoid is staying at the same place. As I improve in skills, musical interpretations, and acting, I am able to approach each element of my programs with perfection. As I’m preparing, I build momentum and confidence until I reach a peak of concentration. It is the moment that I feel my best. Then I can bring out one hundred percent, which makes me satisfied with myself. This is my goal.”