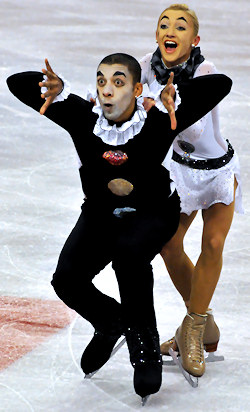 Germany’s Aljona Savchenko and Robin Szolkowy had a rough start into the Olympic season when they struggled  in their free skate at last month’s Trophée Bompard.

The  two-time World Champions finished an uncharacteristic third. Then the question was whether or not they would qualify for the Grand Prix Final.

Not making the Final would have been embarrassing for the three-time European Champions, however, the team rose like a phoenix at last weekend’s Skate Canada after skating both programs brilliantly.

Mind you, their free skate was brand new as they had dumped the ill-fated previous routine right after Paris. Not only did the Germans take the gold with a 21-point advantage over Russia’s Maria Mukhortova and Maxim Trankov, but they also established a new record total score of at 206.71 points.

The previous record score of their rivals – China’s Xue Shen and Hongbo Zhao – dated back to 2005, and this was at a time when the free skate contained an additional element. There is no doubt – Aljona Savchenko and Robin Szolkowy are back in business and confirmed their role as top contenders for the Olympic Winter Games in Vancouver.

To start from scratch in the middle of the season and just a couple of weeks before your second Grand Prix event is a risky choice. “But it was the right choice,” stated Szolkowy. “Sometimes you need to go back one step in order to take two steps forward,” observed coach Ingo Steuer.

On the flight back from Paris to Germany, Steuer got the idea to use Out of Africa for the new program. However, first the coach and students had to make the difficult decision to dump the program You’ll Never Walk Alone that they had worked on since May.

“The most difficult part was to make this decision,” recalled Szolkowy. “Do we do something different and if yes, what? So we listened to a couple of music choices, and at first we weren’t even convinced of the music we are using right now.”

Savchenko felt that leaving behind the old program was not difficult at all. “It wasn’t hard,” she laughed, “but it was hard to break in my new skates. The other program just didn’t suit us. I’ve said this from the very beginning and I never wanted this music. So to change it was rather easy for me.”

However, when Savchenko first listened to Out of Africa, she wasn’t exactly thrilled with that either. “I didn’t really want it. I thought ‘this is boring and the people are going to fall asleep’. But then Ingo skated to this music and showed us what he had in mind. We felt this could be really good and we agreed.”

The program is not only good; it turned out to be a masterpiece. The routine was was almost perfect Kitchener, with the only glitch being a single Axel instead of a double by both skaters. It gave the audience the goose bumps and earned a standing ovation. One judge was even so impressed that he awarded the couple a perfect 10.00 for performance/execution. This was a first in the history of the new judging system.

The successful debut of the new program and the convincing victory should give the Germans a boost of confidence as they head into the Grand Prix Final. The team will take a day off tomorrow (Wednesday) to rest a bit and then plan to resume work before leaving for Tokyo Monday next week.

“We will change some small things in the program,” Szolkowy said, “things we know that aren’t working perfectly. The order of the elements is good for us. For some reason, both of us weren’t really able to do a triple twist in the old program, just because of the order of elements. Now after the two spins, we can do a triple and it’s in the second half of the program and counts more.”

Steuer added that he has in mind some transitions he would like to improve before the Final, however, the team will mostly work on polishing the program.

“Sometimes in practice I suddenly don’t know what element comes next,” Szolkowy revealed with a laugh. “It is a kind of blackout. Luckily when I’m skating my body knows what to do and then it comes back to me.”

There were no problems with the short program to Send in the Clowns. The routine was well received from the very beginning and the Germans performed it well, too. The white-make up which they wear to depict clowns draws attention, which is unusual for a competitive program. Both skaters said that it takes only about ten minutes to apply the make–up as their coach does it for them.

Szolkowy at first didn’t like the idea of the make-up in competition. “It’s ok in the show, but when my nose is itching in competition, I want just to scratch it and not worry about the make-up! But I got used to it. I thought it would be worse.”

No changes have been made to the short program since Trophée Bompard, and none are planned at this point.

The first show-down between the reigning World Champions and the two-time Olympic bronze medalists Xue Shen and Hongbo Zhao will happen in the Final. The Germans watched the performances of their rivals from their two Grand Prix events on video. “They were strong,” noted Savchenko. “We will see who is better. It will be exciting.” Savchenko said.

Szolkowy is also looking forward to meeting them in competition. “We are pretty much at the same level. They can win and we can win, but someone else could win, too,” he underlined. “Actually all the couples in the final are the Olympic top contenders for me. These are the best and the best of them should win. I’m hoping for a competition in which everybody is showing what they can do and not a competition where everybody is falling and someone just has to win.”

The Grand Prix Final is another step towards the final goal – the Olympic Games. “I’m not putting the emphasis on the Grand Prix Final and I don’t think that we absolutely have to win this, no matter what,” Steuer stated. “We’ll go there, we’ll show our programs, and we’ll see what happens. The Olympics are the most important thing and this is what we are working for.”  In any case, the team also plans to attend Worlds following the Olympic Games.

There are two and half months left before the Olympic Winter Games. Two and a half months in which Savchenko and Szolkowy will continue to refine their programs. “We still need to be more relaxed,” Szolkowy admitted. “We’ve skated our short program in practice in a really relaxed way, with a lot of flow. We need to carry this kind of confidence to competition and not think about being in competition and being nervous.”

“We felt we were slow at Skate Canada,” continued Szolkowy. “The rink was suddenly so big! The same goes for the free skating. We need to include some variations of speed into it. You don’t have to skate slowly to slow music all the time.” Savchenko agreed. “We still need to get used to our program. We still have to stabilize all the elements to do them in competition like we can do them in practice.”

The couple will compete at the Final, German Nationals, and the European Figure Skating Championships before the Olympic Games. If they skate as well as they did in Canada, chances are good that they will become the first German pair skaters to win Olympic gold since Ria Baran and Paul Falk in 1952.