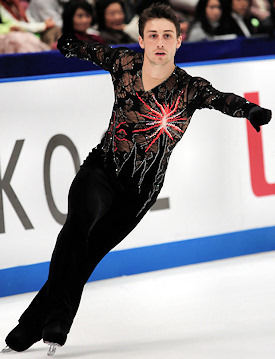 Brian Joubert, 25, of France placed first in both programs at NHK Trophy to win his seventh Grand Prix gold medal.

Thus far this season, France’s Brian Joubert  has  shown two sides. One side has depicted the insecure, stressed out skater who struggles, while the other has shown a  confident, powerful skater who goes out onto the ice, knows what he has to do, just does it – and wins.

The latter side was displayed at  NHK Trophy this past weekend, where Joubert won and most likely qualified for the ISU Grand Prix of Figure Skating Final in December.

“I was very disappointed,” he admitted while recalling his performances. “I actually don’t like to compete in France because of the pressure. I was tired after the Trophée Bompard and I didn’t skate for a week.”

The week-long rest was apparently a good idea as Joubert returned refreshed to his practices. “We did a lot of good work in the week before NHK,” he noted. At NHK Trophy, the three-time and reigning European Champion looked strong in practice, the quad toe was very solid, and he also landed the quad Salchow.

While Joubert wasn’t perfect at NHK, he  hit the quad toe in both programs and overall skated  well. “Winning wasn’t actually the main goal for me at this event,” he revealed. “The goal was to regain confidence. After the disappointment from the Trophée Bompard, I felt lost somehow and I didn’t really know what I should do. This event was a way for me to rebuild. I wanted to skate two clean programs, and when I realized that my opponents had made more than a few errors, I didn’t risk too much. But I think that I should have done the first two quads (toeloop and Salchow), because I felt good in practice and in the program,” he explained.

As is the case in most events, Joubert skated last at NHK, and therefore was able to followed what his competitors were doing. “I saw their scores and I told myself that they must have made some errors. I didn’t watch their program, because the job for this competition was to focus completely on myself.”

Actually, however, the Frenchman often does watch at least the beginning of the programs of his direct competitors, and doesn’t feel that this makes him nervous. This way  he can adapt his strategy. Sometimes, however,  this method backfires. One example was the 2009 ISU World Championships. After seeing that other competitors hadn’t done quads, he decided to change his jump layout in the free skate. As a result, he got lost in in his own program and slipped to third overall. It was a mistake he learned from.

Right after the World Championships, Joubert decided to make some major changes for the Olympic season, and was not afraid of the risks. He parted with coach Jean-Christophe Simond (who had led him to the World title in 2007) and went back to his former coach Laurent Depouilly (who coached him to his first European title in 2004).

When it became public during the summer that his new free program to Ancient Lands by Ronan Hardiman would be choreographed by Albena Denkova and Maxim Staviski, many people were surprised.

Denkova and Staviski are two-time World Ice Dance Champions from Bulgaria and retired from competition in 2007. Although they’ve always had a lot of input in their own programs, they didn’t have much experience in choreographing programs for others, let alone for a single skater, who is aiming at the Olympic gold medal.

“I picked them because they are really good ice dancers and were good competitors and I’ve always loved them,” Joubert explained. “I think this is also a good challenge for them. They’ve never choreographed for single skaters before. It was interesting for me, for them, and also for the judges. If you have a choreographer with a lot of experience who does many programs, you start to recognize them (in the programs) each time you see a skater, and this is something I don’t like too much.”

“It is something new to work with Albena and Maxim, and I think you should do something new in an Olympic year,” the European Champion continued. Joubert obviously knows that this was a risk. “Yes, it was risky,” he admitted. “Even they were a little afraid in the beginning. But I like taking risks. The program is good and demands a lot of work, but Albena and Maxim are wonderful and I really enjoy working with them. They really give a 100 percent for me.”

For Joubert, it was important to be different this year. “With my new free skating (he kept his short from last year), I want to show that I’m not just a jumper. I want to be a figure skater,” he pointed out. “My goal is still to do a free program with three quads, but I also want to show that I can do choreography between my jumps and I try to improve my steps and the spins. That’s why it was difficult for me in the beginning of the season, because I never tried it before, and it’s new for me. But I want to work and show a different Brian Joubert.”

The six-time French Champion admitted he wasn’t yet a 100 percent when he competed in Nagano the past weekend. “The time between the Trophée Bompard and the NHK Trophy was too short,” the Joubert commented, “so I wasn’t completely ready physically. Technically I felt solid. Choreography-wise I feel that my program has improved, but it was difficult physically.”

Joubert will  now use the time before the Grand Prix Final to get completely ready. “I have three weeks left, which is enough time,” the 25-year-old noted. “It was important for me to qualify for the Final, as it is an additional competition, an additional practice, before the European Championships and the Olympic Games.”

The athlete wants to be different, and while his look at skating has changed, his goals have not. Since Joubert appeared on the international scene in 2002, more or less out of nowhere, to take the European bronze medal (and never has left the European podium since), he always said that he wanted to become European Champion, World Champion and Olympic Champion.

Only the last position hasn’t been checked off that list. The Frenchman finished 14th in his Olympic debut as a 17-year-old newcomer in Salt Lake City. He was a medal contender in 2006, however,  his nerves got the better of him and he came in sixth. Now the 2010 Winter Games are just four months away, and Joubert will be sharing ice with an old rival –  Russia’s Evgeni Plushenko,  who stood on the Olympic podium in 2002 and 2006.

Joubert doesn’t feel  Plushenko’s return to competition increases the pressure, however. On the contrary, it inspires him. “It is good that he came back. It is good for figure skating and it will push all of us.” Joubert is looking forward to new battles with the other master of the quad. Of all the current competitive skaters, Joubert is the only one  that managed to beat Plushenko in a major competition (2004 Europeans).