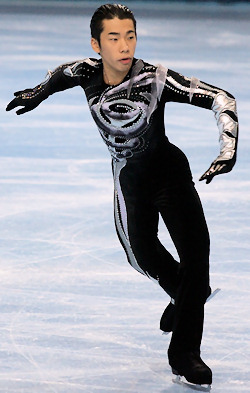 Japan's Nobunari Oda is currently first in the Men's ISU Grand Prix of Figure Skating standings after his win at Cup of China.

Nobunari Oda has had a golden start into the Olympic season. The Japanese Champion won his two Grand Prix events – Trophée Bompard in mid October and Samsung Anycall Cup of China last weekend – with strong performances.

Oda almost achieved a new personal best in the short program in Beijing with 83.35 points. His personal best from the 2006 NHK Trophy stands at 83.55 points. He also scored higher in the free skating than any other man in the Grand Prix so far and is the first man to qualify for the Grand Prix Final in December in his home country.

“At the beginning of the season, I didn’t expect to win two gold medals in the Grand Prix,”  the 22-year-old said. “Now I’m very excited for the Grand Prix Final in Tokyo.”

Although he didn’t receive a single negative GOE in the short and long programs at the Cup of China, Oda was not completely satisfied. “I still had problems with my jumps. I popped the second Axel and I didn’t even try the quad,” he pointed out.

To do the quadruple toeloop in competition is an important goal for Oda, although the ambitious skater has done well without it so far. He landed it last year at the Four Continents Championships, but hasn’t tried it yet this year in competition as it wasn’t consistent enough in practice.

“I want to do it in the free program at the Grand Prix Final,” Oda asserted. “The quad is a big motivation for me. So I can push myself more. This is the way I have to train. It’s not all about the quad, but it is good to have it.” However,  the skater is not sure if the quad is needed to become an Olympic Champion. “I think clean performances are important (for winning).”

Oda scores highly for his technical elements – beautiful jumps with good flow on the landings and fast spins – however, his program component scores have lagged behind a bit in the past. “I have more confidence in my program component score this year,” Oda noted. “Last year, I was very nervous about my jumps after sitting out one season. So I trained mostly the jumps and didn’t work as much on expression and transitions. But this summer I was able to focus more on this (program components).”

Both programs are new and very different from each other. For the short program, Oda is skating to a modern arrangement of  Totentanz (Dance of Death), an intense and almost dark piece of music by Franz Liszt. He wears a black costume with white markings, reminiscent of a skeleton, but he claims that it should symbolize a whirling typhoon. “It took us a while to find the music for the short program,” the athlete revealed. “In the short program it is very important to look strong.”

The skater has had quite a few ups and downs in his career, living through both successes and defeats,  but has kept his cheerful, friendly personality.

In December 2005, Oda was declared National Champion of Japan and was named to the Olympic Team, but his joy lasted only for a few hours. The result was changed and the title and the ticket to Torino went to his friend and competitor, Daisuke Takahashi. Oda had repeated three triple jumps in his free skating, which is not allowed. The scoring error was only corrected after the victory ceremony. But the skater bounced back from this disappointment quickly.

In the summer of 2007, Oda was stopped by the police when he rode home on his motorcycle. He was slightly was over the 0.0 drink-drive-limit that is strictly enforced in Japan, but the Japanese Federation reacted harshly, pulling him from his Grand Prix events and suspending him for three months. Oda then decided to sit out the whole season.

“I felt the support of many people during this time and it made me to appreciate everything more,” Oda said. “My personality has changed and I am more grown up. It made a big difference for me.”

He is a true fighter. As the 17th descendant of famous Japanese warlord Nobunaga Oda, the skater has samurai blood in his veins. “Since him, all male descendants have the syllable ‘Nobu’ in their first name,” the 2006 Four Continents Champion explained. By the way, ‘nobu’ means ‘belief’ and ‘nari’ means ‘success’ – an appropriate name for a top-level athlete.

Oda splits his training time between Japan and the USA. He’s been working with coach and choreographer Nikolai Morozov since the spring of 2008, and has also been coached by his mother Noriko throughout his career. “He is one of the most talented skaters out there, and it is time for him to reach his full potential,” observed Morozov.

For sure, Oda is one of the contenders for the Olympic podium this season. The men’s event promises to be the toughest competition in Vancouver with up to ten medal contenders. Oda knows his competitors well, except for one – Evgeni Plushenko.

Plushenko retired in 2006, when Oda just had come up from juniors and competed in his first senior season. “I’ve never competed against him,” noted the Japanese skater. “We were both on the Grand Prix (in 2005/06), but in different events. Plushenko is amazing. Stéphane Lambiel as well is great. I am very happy that I can compete against them, and it is a good motivation for me that they came back.”

The samurai skater is now ready for the  biggest battle of his career.