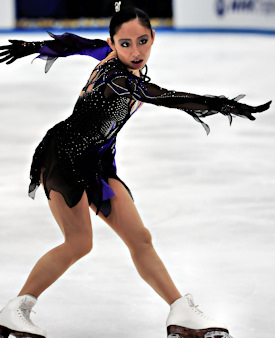 Japan's Miki Ando, 21, made history when she became the first (and so far only) woman to land a quadruple jump in competition at the ISU Junior Grand Prix of Figure Skating Final in December 2002.

Miki Ando of Japan has won both her Grand Prix assignments (Rostelecom Cup of Russia and NHK Trophy), and is the first lady skater to have qualified for sure for the ISU Grand Prix of Figure Skating Final.

Despite the good start into the Olympic season, the 2007 World Champion still wasn’t too pleased with herself. “I know that my free skating wouldn’t be really competitive in a bigger competition,” Ando admitted.

Ando made a few errors in her programs at NHK Trophy and was beaten in the free skating portion by Russia’s Alena Leonova. “I wanted to skate better than I did in Moscow, but all my weaknesses came out instead, so I feel only 10 percent of happiness about winning. Otherwise, I just feel that I was lucky. I can’t be overwhelmed with joy,” she continued.

Ando trained for almost one week alone as her coach Nikolai Morozov went to the Samsung Anycall Cup of China in Beijing with his other student Nobunari Oda. “I thought that I trained well, but I felt a little uncertain,” said Ando. “Maybe I was not strong enough yet (to train alone).”  On Morozov’s advice, she didn’t go for the triple Lutz-triple loop combination in the short program and later was disappointed in herself that she didn’t try the combination. “A triple-triple is a key point and I’ve done it many times. In practice here I felt like something was missing and my emotions were weaker.”

The 21-year-old has now set her eyes on to the Grand Prix Final in early December. “I am happy to be in the Final and I will train hard for it and I want to become stronger mentally,” stated Ando. “I want to show the people in Japan stronger performances. I want to be on the podium in the Final. This would be an important step towards the Olympic Games.”

Maybe we will see a different short program in the Final. Ando originally chose Queen of the Night for her short program, but then switched to Requiem in the fall. “I think not everybody understood the image of a spider in the first program,” the skater said. “Maybe we’ll change the (current) short program or the first part of it,”  revealed coach Morozov. “I’m actually not worried about the jumps. Miki’s jumps are very consistent in practice, but maybe the rhythm in the beginning of the program is not right for her.”

Both skater and coach are very happy with the long program that they titled “Cleopatra”. In fact, the image of the proud and beautiful Egyptian queen suits Ando perfectly. The program consists actually of three pieces of music: Rome (a TV series soundtrack), Marco Polo (a soundtrack by Ennio Morricone and played by Yo-Yo Ma), and Mission Cleopatra (from the Asterix and Obelix movie).

“Everybody in the world knows Cleopatra,” Ando said. “Cleopatra was a famous queen and a strong woman, but at the same, time she was also a woman who loved and had a family. I want to show both sides of her character. I really want to become Cleopatra and I enjoyed taking that role.”

The Japanese has presented two different costumes for this program in competition so far. At the Rostelecom Cup of Russia, she wore a golden-bronze colored costume, while at the NHK Trophy, she was donned in bright blue and gold with Egyptian symbols. A third costume may be tested at the Grand Prix Final.

We probably won’t get to see her famous quad Salchow in the Final. Ando made history when she became the first (and so far only) woman to perform a quadruple jump in competition. She landed the quad Salchow at the ISU Junior Grand Prix of Figure Skating Final in December 2002.

“I am training the quad, but it is not good enough right now to include it in the program,” Ando confessed. “This is the Olympic season, and I felt that I had to improve the five program components and I focused on that during the summer practice. First I have to get the triple-triple consistent. I would love to try the quad at the Olympic Games  if I am in a good condition and if everything is right. It would be a dream to do the quad at the Olympics.”

Even without the quad, the skater is a strong medal contender for Vancouver. Ando won Worlds in 2007, but had to withdraw from Worlds in 2008 due to injury in the middle of her free program. In spite of a leg muscle strain, she insisted on trying to compete, but left the ice in tears after less than two minutes into the program. She came back last year and took the bronze medal at the 2009 World Championships in Los Angeles.

Ando is a fighter and she has proven it again and again. On the other hand, not many people know that she is a very sensitive and emotional person and also very self-demanding. She used to cry a lot at competitions because of nervousness. “I put myself under pressure a lot and I’m depressed when practices aren’t going well,” she confessed.

In Japan, life became difficult for the “beautiful princess”  (translation of her first name) as paparazzi reporters and photographers chased her wherever she went. Ando relocated to the USA in the spring of 2005, and was first coached by Carol Heiss-Jenkins and then by Nikolai Morozov.

“Living in the USA was hard for me at first,” revealed Ando. “I didn’t speak much English and I didn’t understand what other people were saying. But now I have a lot of friends in Hackensack and I try to speak as much English as possible. It’s getting better and better and I’m enjoying it.”

“Life in the USA is easier for me,” Ando continued. “I can go out in peace. Of course I love Japan, but sometimes it is difficult for me. There are paparazzi who are waiting for me outside and then write some stories about me.”  At one point in the past, the Japanese Federation even asked the press in an official letter to back off.

The 2004 World Junior Champion started to skate quite late at age nine, but she landed her first triple jump two years later. It was, of course, the Salchow. The athletic girl has tried many other activities such as swimming, ballet, playing the piano and calligraphy before she focused on skating. “I thought skating was the most interesting and the best way to express myself,” Ando explained.

When she started out in Nagoya, she benefited from an active practice group. “When I was younger we had group lessons,” Ando recalled. “There were also Mao and Mai (Asada), and we competed in jumping up to eight hours a day! I think that’s where the basics come from. This competition was like a game, who would land more jumps.”

Jumps made Ando famous, but she has been working hard to become a complete skater and to be more artistic. She knows what it will take to step onto the podium in Vancouver. “I’ll need perfect programs and I’ll have to have more confidence in myself,” she  summed up.