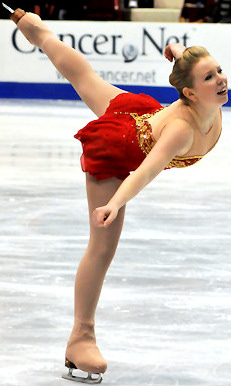 At the 2009 Skate America, USA's Rachael Flatt, 17, became the second lady to ever beat Yu-Na Kim in the long program at a Grand Prix event.

USA’s Rachael Flatt won the long program at Skate America despite not receiving credit for her last spin, beating Korea’s Yu-na Kim’s score by nearly five points. But the 2008 World Junior Champion had help as Kim fell on her triple flip and struggled with two other jumps.

“I am honored to compete against the best in the world,” said Flatt of Kim. “Unfortunately, she did not have her best skate, and I happened to skate well. Everyone has good and bad days…no matter how hard we try to have a good day everyday! But it feels fantastic to have skated so well and won the long program!”

“Personally, I am in complete awe of Yu-Na,” said Flatt. “She is an incredible skater – especially with her numerous accolades. She is very talented and has obviously worked tremendously hard to get to where she is now.”

Flatt acknowledged that she is inspired when she shares ice with Kim. “She pushes me to be a better skater. On the first practice I ever had with her, I was intimidated, but I’ve learned that I have to get my work done just like everyone else and she just happened to be assigned to that group. But she is a fantastic skater, and it is unbelievable how she is able to compete so well under immense pressure from her country and supporters. I applaud her for that!”

The two-time and current U.S. silver medalist also beat her personal best in the long program at Skate America, which has upped her confidence level. “I had a lot of confidence from my training heading into Cup of China, but it diminished slightly due to the sub-par performances I had. But Skate America was much more rewarding, and it definitely helped to build my confidence.”

In the short program at Skate America, Flatt anticipated the rotation of her triple flip going into the combo which caused the torque and lean in the air resulting in a fall.

“It was a minor mistake technically at the beginning of the jump,” explained Flatt, “but sometimes I am unable to make the appropriate corrections in midair – especially considering that it is just over .5 seconds in the air.”

Flatt had orginally planned the same triple-triple at Cup of China, but opted for a triple-double due to the landing of the flip.

“I had been training the triple-triple combination leading into Cup of China,” Flatt stated. “It had been going incredibly well, but then I struggled a little bit while I was there both in practice and competition.”

Despite the fall at Skate America, Flatt felt her overall performances at this event were a much better reflection of her preparation leading into in the Grand Prix. However, as most skaters will attest to, a week between each event doesn’t allow for much improvement in performances and/or scores.

“I am planning to do my triple-triple in all of the up-coming competitions this year as I feel my training has given me much more confidence in the completion and execution of the combination,” said Flatt.

At Cup of China, Flatt earned a level three on her layback spin, but only a level two at Skate America.

“I actually did not attempt the level three layback at Skate America because I felt the double Axel needed to be great,” she explained. “I did give up a few tenths in points, but I needed one more big breath just to feel comfortable going into the double Axel since it is difficult to breathe when leaning all the way back!”

The double Axel is an easy jump for Flatt, however, she needed to right herself after the spin, get her bearings, and have an extra second to ensure a proper set-up leading into the jump.

“Sometimes a sacrifice needs to be made in order to get the job done, and fortunately, it was minor in this case. At Cup of China, I attempted a level three layback and received credit for it,” Flatt summed up.

“I held the rotations long enough at Skate America,” she recalled. “In one instance, I was a tad behind the music in China.  I attempted the level four spin combination, but I did not hold one of the positions long enough to receive credit.”

At Skate America, Flatt’s final spin in the long program did not earn points, and in fact, was counted as two separate spins. “My spin combination changes direction and it was too far apart between the two parts of the spin,” the 17-year-old explained. “We will be fixing that for Nationals!”

Flatt is currently fifth in the Grand Prix standings and the next and final event of the circuit before the Final takes place this week at Skate Canada. Four talented ladies could break into the top, two of which are Flatt’s fellow countrywomen – current U.S. Champion Alissa Czisny and U.S. bronze medalist Caroline Zhang. While Czisny and Zhang have an outside shot of this, the main focus for Flatt now is the upcoming U.S. National Figure Skating Championships.

Flatt is excited about nationals, but not disillusioned about the upcoming Olympics. “I just want to make the U.S. team and there are no certainly no guarantees there!”