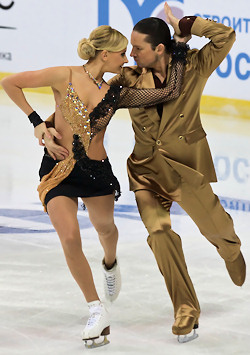 Oksana Domnina and Maxim Shabalin take the lead in the Compulsory Dance at the 2010 Russian National Figure Skating Championships.

As expected, current World Champions Oksana Domnina  and Maxim Shabalin of Moscow Oblast (MOB) easily won this segment of the event with 45.17  (22.00/23.17) points. The students of Natalia Linichuk and Gennadi  Karponossov have not competed at all since their triumph in Los Angeles  last spring, but they looked as if they have not missed a beat. The  couple was smooth and confident throughout, and gave a  commanding and  expressive performance.

“We were very eager to show our programs to the audience and judges,”  commented Domnina afterwards. “Finally we got out. We have really  missed competing”

“We are lacking competitive practice a bit,” added Shabalin. “We  skated well, but we do have a room for improvement. All our programs  are 100% ready, but the question is whenever we will be able to skate  them 100%”.

Behind the leaders three teams are in close competition for the  all-important second place – the spot which would secure the second place team  a chance to compete at both the European Figure Skating Championships and the Olympic  Games in Vancouver.

“We always had strong compulsory dances – even back when we were  competing in Juniors,” said Soloviev in the mixed zone. “We skated  well and achieved good results, but we have to put all of it behind us  now and concentrate on skating good in the Original Dance (OD) and Free Dance (FD).”

“The OD turned out to be our weakest link so far this season,” added Bobrova. “For some reason it did not go well with the judges. We made some changes, prepared new costumes, and we hope to dance it so well  tomorrow that the audience will jump to their feet and dance alongside  with us.”

Sitting in the third place are Riazanova and Tkachenko. The new couple is coached by Alexi Gorshkov in Odintsovo. They  finished a disappointing sixth at the Rostelecom Cup Grand Prix event, but the team has had time to improve a great deal since then. They scored 36.68 (18.13/18.55) points for their rather aggressive interpretation of the dance which had  excellent flow and power, but lacked the unison of those teams, which  placed ahead.

“We are satisfied with our performance,” said Riazanova.

“Our main changes since the Grand Prix event (Cup of Russia) was fixing a hook,” joked Tkachenko, referring to their mishap in Moscow then Riazanova’s sleeve  got caught by a hook on his costume. “We are no longer getting stuck.”

Ekaterina Rubleva and Ivan Shefer (MOS) drew the second starting number for the CD and performed a nice and clean tango with strong edges and close positions in dance holds, however their speed and flow in  the second pattern was not quite as strong as in the first. The 2009  Rostelecom Cup bronze medalists received 36.43 (18.01/18.42) points.

“We are happy with our performance,” said Rubleva, “but the result  unfortunately is a bit unexpected. We realize that the difference is  minimal, but it is still unpleasant. I don’t think we were affected by  the early start number, though.”

A notch below the top four teams are Anastasia Platonova and Alexander  Grachev (MOS) with 33.91 points, followed by  Kristina Gorshkova and  Vitali Butikov (MOS) (33.65), and Julia Zlobina and Alexei  Sitnikov (MOS) (32.96).

Zlobina and Sitnikov, who  moved to Moscow this year,  made noticeable improvement in their skating skills and posted the  highest technical score of the three couples. However their presentation  marks kept them in the seventh place overall.

The event continues with the Ladies Short Programs.