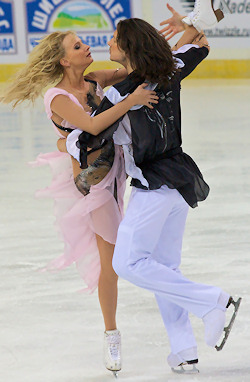 Oksana Domnina and Maxim Shabalin took the Ice Dance title, while Ekaterina Bobrova and Dmitri Soloviev of Moscow (MOS) edged out  Ekaterina Rubleva and Ivan Shefer (MOS) for the silver.

Ekaterina Riazanova and Ilia Tkachenko (MOB) maintained a very close fourth with just over two points keeping them from the podium.

Domnina and  Shabalin’s free dance debut did not go over as well as they had hoped. Domnina stumbled on the second twizzle, which received  level two, and their combination spin was rated only a level three. In  addition, the current World Champions appeared tense and tentative, which prevented   them from fully committing to the performance.

On a positive side, the  team has created new lifts for the dance and with more mileage, the  dance has the potential to become one of the most emotional programs of  the season. They placed first in the free dance with  103.06 (46.75/56.31)  points and overall (214.77 points) to win the title.

“Our performance was not as good as it could have been,” admitted  Domnina at the press conference. “I made some little mistakes. They  did not make a difference in the end, but the aftertaste is a bit  heavy. But as I have said before, we are just happy to compete here and  get the feedback from the judges. We know what we have to work  at. We will review the performance later.”

When asked to rate their own performance, Shabalin replied: “It’s a bit  hard to quantify such things, but as you have seen, there were some  glitches in the program. I’d say it was around 70% of our potential.”

Bobrova and  Soloviev produced a  smooth and floating performance to Adagio, placing second in the free dance with 94.95 (46.32/48.63) points. The  students of Svetlana Alexeeva and Elena Kustarova easily had the best  speed and flow of all the teams, but the choreographic complexity of  their program was not as good as some other teams. However, with a total score of 189.29, they rose to second overall to win the silver.

“First of all, we would like to thank the audience for their support,”  said Soloviev at the press conference. “Many of our friends and  relatives have traveled to St. Petersburg to root for us and it meant  a lot and made all the difference.”

“Yes, it was very important,” agreed Bobrova. “We were very well  received today. Yesterday I made a mistake,  but today we skated clean. We did everything we planned and I hope  that you enjoyed it as well.”

The team explained that the choice of music was their coaches’  decision. “The first time we heard it in this arrangement, we loved  it. It’s 100% our music.”

The couple have to overcome a personal loss: one of the choreographers  on their team, Tatiana Stepanova, has recently passed away and they  dedicated their performance to her memory.

Rubleva and Shefer were also smooth and inspiring in their  interpretation of Vie d’Amour, but with two step  sequences rated only a level two, they had to relinquish second place which they’ve held onto for the last two years. Their touching dance was very well received by the  audience, and the skaters themselves were pleased with the performance. The team placed third in the free dance with 94.05 (46.00/48.05) points, however, with a total score of 188.46 points, finished third overall for the bronze.

“Forgetting about the marks for a moment, I think it was very good,”  said Shefer at the press conference. “We really did our best. We don’t  see one single mistake in the entire program and the audience  supported us throughout, which was very pleasant.”

The skaters were visibly upset about the scores in the kiss’n’cry area  and were at a loss to explain the scores “We would like to know the  answer ourselves,” said Rubleva. “You are asking the wrong person.”

“I think we skated really well,” she continued. “We dreamed about  skating to this music for so long. It is a kind of program, which you  perform with your soul, not by your feet, and the audience usually  responds to it. This is exactly what we wanted to do this season and I  think we have succeeded. I think it was at least as good as our Grand  Prix performances. I believe it was more emotional. We gave everything  we could.”

Riazanova and Tkachenko were passionate and expressive in  their interpretation to the music of the Master and Marguerite soundtrack,  attacking all the elements at great speed. However, they lacked  the precision  of the higher ranked teams, and placed fourth in the free dance   92.37 (44.31/48.02) for the free dance and overall (186.29 points).

Kristina Gorshkova and Vitali Butikov (MOS) finished a distance fifth (85.86 points) in the  free dance, but remained sixth overall (167.17) behind Julia Zlobina and Alexei Sitnikov of Moscow who had 167.70 points.

Anastasia Platonova and Alexander Grachev (MOS) slipped to  seventh place after they missed the second half of their combination  lift.

The event continues with the Men’s and Pairs’ Long Programs.