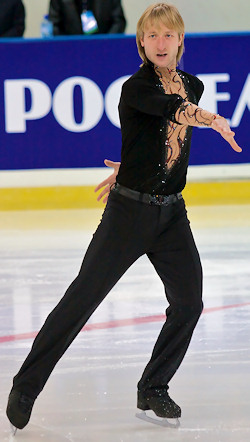 Plushenko popped his  planned opening quad toeloop into a triple, but immediately landed a clean one afterwards. He  was not able to  land his second triple Axel on the first try, and fell out of a triple  Salchow landing immediately after the successful execution of that  jump later.

“I went for the second quad because I missed the first one and had to  do it to rectify the situation,” explained Plushenko. “I am happy that I was able to land a triple  Axel in the end. Perhaps there was a certain euphoria right after it  and this is why I fell on the Salchow.”

The student of Alexei Mishin was rather critical of himself at the  post event press conference. “On the scale of five, I’d say it was a  weak three. It’s impossible to win any major competition skating like  that. I will work on it more and train more. But to some extent it’s a  blessing in disguise. There was a lot competitions and I was skating  better and better on every one of them, so it’s natural that there is  a decline. The good thing is that it happened now, before the  Europeans. I plan to do two quads at Euros: a quad-triple and quad solo.”

The 2006 Olympic Champion rearranged his program on the flight without  previously consulting his coach. “I had a triple Axel-triple flip  sequence, but decided not to do it because the Axel turned out to be  a double.”

When challenged by the media about his marks, Plushenko was  quick to  point out that he is not the only one to score a notch or two above  what he is getting internationally. “I am not the only one who has  high scores here. Look at the second place in the Short Program – he got 95.  Borodulin got 82. Do you think he skated like 82? It’s only natural,  it’s Nationals.”

Borodulin finished second in the long program with 150.50 (67.70/82.80)  points, but with a total score of 234.92 points, placed third overall behind Voronov. Though the skater popped his planned triple Lutz into a single in the  second half of the program, he otherwise  was very strong and landed both his triple Axels – one in combination with triple toeloop. The 20-year-old also landed four other clean triples  and got the second highest program components score for his sharp and  powerful interpretation of the tango.

“I have done nearly everything I’ve planned,” said Borodulin  afterwards. “My only mistake was missing a triple Lutz. Perhaps I was  a bit carried away by the fact that I landed two hard jumps and thought that everything else would be easy in comparison.”

Konstantin Menshov (SPB) delivered another good performance in which he  landed a quad toeloop-double toe loop combination and a triple  Axel, but he popped the second planned quad into triple and only did a  double loop later in the program. The student of Evgeni Rukavitsin  posted the second highest technical score of the night, but relatively  low program component marks kept him off the podium.

Menshov received enthusiastic support  from the home crowd, and while his routine to the music of the Saw II soundtrack had  great energy and attack, he lacked the impact of his more  experienced competitors. He scored 148.05 (70.97/77.08) points for a third place finish in the long and fourth overall (228.71 points).

Voronov maintained his second position overall (240.01 points) despite  finishing only fourth in the long program with 144.37 (63.77/81.60)  points. The skater had to fight for the landing of his quad toeloop,  then he stepped out of his first triple  Axel and fell on the second one. The mistakes discouraged the student  of Alexei Urmanov, and even though he pulled himself together to finish  strong, the middle of his routine to Schindler’s List fell flat.

“I would like to congratulate Evgeni and Artem,” Voronov later said. “They skated well  today. Unfortunately I cannot say the same for myself. There were  mistakes, there was a fall, but I kept fighting till the end. I can  honestly say that I’ve done my best. I was not under pressure [after  an excellent performance in the short]. I suppose I was just too tired.”

Denis Leushin (MOS) finished fifth in the long program (138.81  (65.83/73.78)) and overall (217.21). He did not attempt a quad and  fell on the second jump of his triple Axel-triple toeloop  combination. He also stepped out of another triple Axel attempt, but  he had rather strong presentation skills and expressed the character  of his program well.

Ivan Tretyakov slipped to sixth place after an error-filled performance  to music from the Charade soundtrack. He did not attempt a quad Salchow, which he  has landed in competition before, and popped an opening triple Axel  into a single.

The event continues with the  Pairs’ Long Programs.